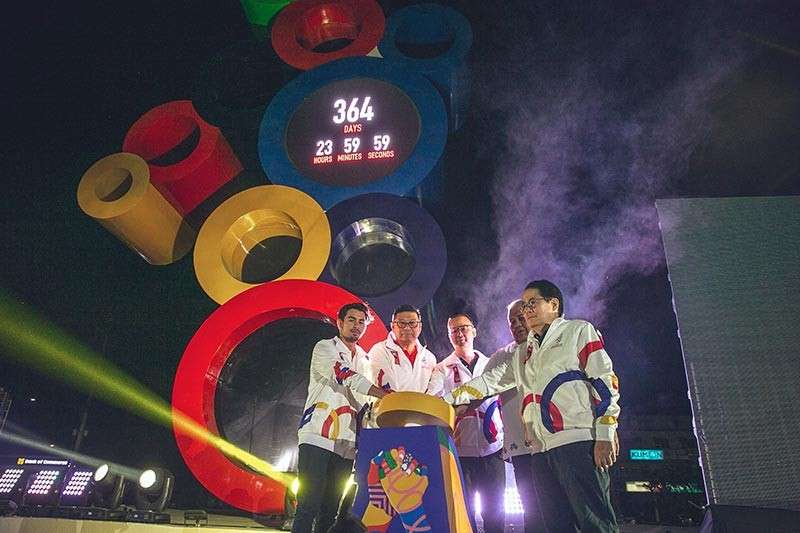 PREPARATIONS for the 30th Southeast Asian (SEA) Games 2019 officially came to a full swing on Friday evening, November 30 with the unveiling of a countdown clock at the Bayanihan Park in Angeles City.

A time honored tradition of the SEA Games, the Philippines as host country leads the countdown ceremony to signal the start of a series of activities, functions, and gatherings leading up to the opening of the 30th SEA Games in 2019.

“The activation of this countdown clock represents our optimism for a future that is full of promises. It symbolizes the common aspirations of our South East Asian family for a stronger regional community that is bound by friendship, camaraderie, cooperation, and teamwork,” Executive Secretary Salvador Medialdea said.

The logo--11 colored linked rings--brings together and incorporates the 11 participating countries laid out in the likeness and figure of the Philippine map.

“The next 365 days will be more than just a period of anticipation and excitement for the Philippines. It will also be a challenging time for the entire country as we prepare to host the biggest sports event in the region. We are confident that the Philippine SEA Games organizing committee with the help of the Philippine Sports Commission and the Philippine Olympic Committee will hurdle all obstacles along the way,” he added.

“Our hosting of this biennial event comes at a time when the government has embarked on an ambitious infrastructure development program. From our seamless network of highways that traverse the plains of Central Luzon to the Clark International Airport to the world class facilities the we erected for this games (in New Clark City), we can confidently claim that the Philippines is indeed ready to become a regional hub of international sporting events,” the cabinet official added.

“This is also a time for the Philippines to show the rest of the world the warm Filipino hospitality and our drive to excel in various fields of sports. It is indeed a chance for our athletes to compete and at the same time forge lasting friendships with their counterparts from other countries,” Medialdea said.

The opening ceremony was held at the 55,000-seater Philippine Arena in Bocaue, Bulacan on November 30. The closing ceremony will be at the 20,000-seater Athletics Stadium at New Clark City in Capas, Tarlac.

The theme “We Win as One” encapsulates unity, togetherness, and singularity of purpose and the desire to work together in a diverse community to achieve peace, progress and inclusivity. (PIA-Central Luzon)