Sultan calls for unity among Muslim leaders ahead of BOL plebiscite 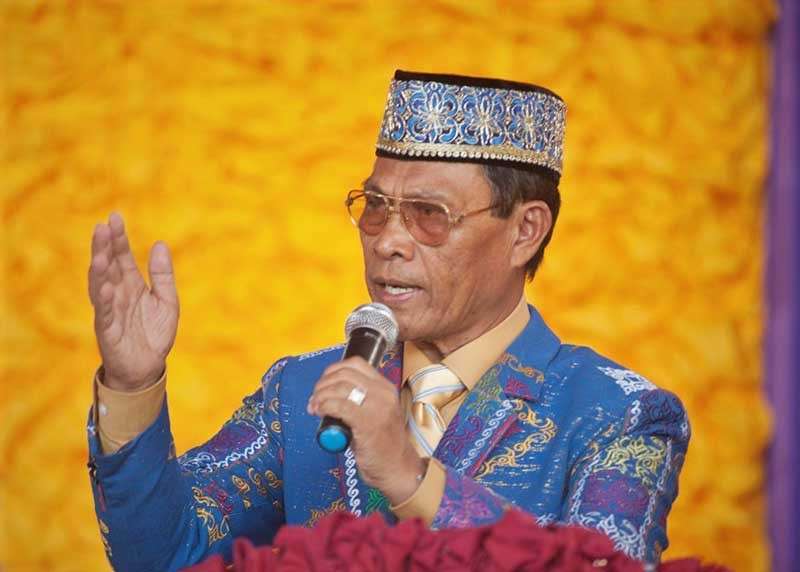 LANAO DEL SUR. Sultan Usman Tantao Sarangani Sr., the Sultan of Uya-an and Paramount Sultan of Mindanao, during the first assembly in Barangay Poblacion, Madalum town, Lanao del Sur, tells the traditional leaders of the two Lanao provinces that they must unite and work together for the ratification of the Bangsamoro Organic Law (BOL) Thursday, November 29. (Jigger J. Jerusalem) 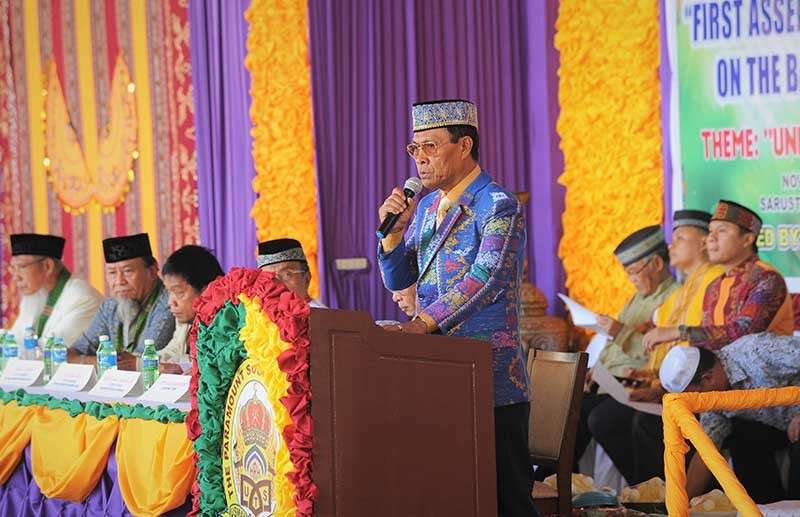 MADALUM, Lanao Del Sur -- A Maranao sultan has gathered some 500 traditional leaders from all over the two provinces of Lanao to put up a united front in supporting for the ratification of the Bangsamoro Organic Law (BOL) ahead of the plebiscite on January 21, 2019.

Sultan Usman Sarangani Sr., the sultan of Uya-an and reigning paramount sultan of Mindanao, said he has gathered the datus and baes of Lanao del Sur and Lanao del Norte to explain to them that the BOL ratification needs their support.

The BOL is a mechanism that will create the Bangsamoro Autonomous Region in Muslim Mindanao (BARMM) to replace the existing political entity that was established in 2001.

Covered under BARMM were the current provinces of the Autonomous Region in Muslim Mindanao (ARMM), six towns in Lanao del Norte, 39 villages in North Cotabato province, Cotabato City, as well as Isabela City in Basilan.

The ARMM is composed of Maguindanao, Lanao del Sur, Basilan, Sulu, Tawi-tawi and the cities of Marawi and Lamitan.

The areas in Lanao del Norte and North Cotabato, however, will only be included in the BARMM if their “mother units,” the province and city that they belong to, will vote in favor of their inclusion in a plebiscite.

Traditional leaders from the Lanao provinces have pledged their full support for the implementation of the BOL as those living within its territorial jurisdiction will vote for its ratification through a plebiscite on January 21, 2019.

Some 500 leaders from all over Lanao del Norte and Lanao del Sur who attended the first assembly of traditional leaders in Barangay Poblacion, Madalum town, Lanao del Sur Thursday, November 29, said they wanted to have the BOL be ratified for the development of the Bangsamoro homeland.

Sarangani said the gathering was a venue for them “to amplify and ventilate salient provisions of the organic law to make them understand and appreciate the law and encourage them to support the measure that would govern the Bangsamoro Government which will replace the ARMM.”

Among those who attended the assembly included the 16 Royal Houses of Lanao, the 28 Legislative Council or the “mubabaya ko taritib,” and other traditional leaders from the two Lanaos.

Sarangani said the event, carrying the theme “Unity, Solidarity and Teamwork,” was the first assembly of its kind in Lanao.

“The assembly will work for the signing of the manifesto [in support of the BOL] full and campaign for its ratification in the coming plebiscite,” he told reporters on the sidelines of the event.

It is their hope, he said, that the ratification of the BOL and the establishment of the BARMM will “better and comfortable life for the Bangsamoro people.”

He said the BOL has recognized the importance of the traditional leaders in the Bangsamoro society making it mandatory for them to play a pivotal role in promoting peace and order, preventing conflict, and in campaigning for its ratification.

He said they are grateful that the BOL was realized during the administration of President Rodrigo Duterte, who signed the Republic Act 11054 into law in July.

Abdullah said the traditional leaders “have the responsibility to support governance” as he thanked the freedom fighters for “helping push the idea of self-governance and self-determination.”

He added that “no tribe of the Bangsamoro will be left behind.”

The closing remarks was given by Honorable Abdulhamid Amerbitor, Board Member, second District, Lanao del Sur and Sultan a Dalomangcob sa Uya-an.