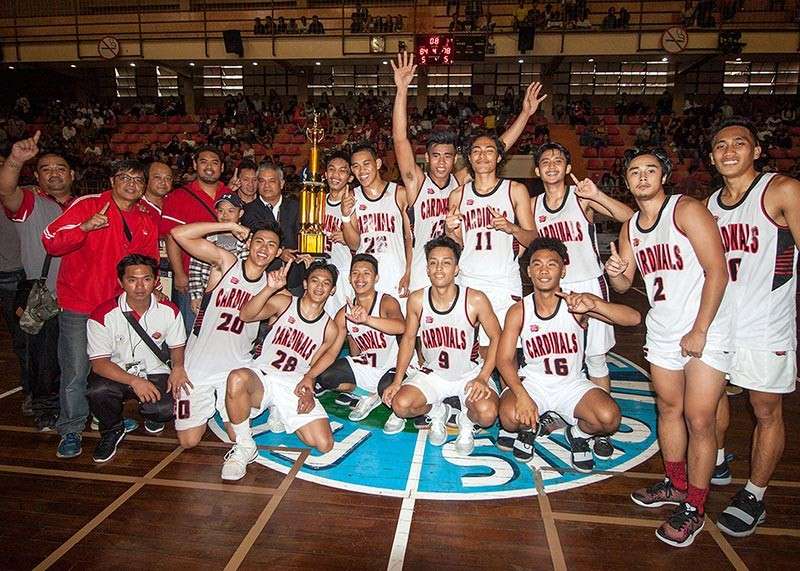 BAGUIO. After a two-year drought, the University of Baguio Cardinals wins the championship of the Baguio-Benguet Educational Athletic League (BBEAL) on Friday, November 30 against the Saint Louis University Navigators. (Jean Nicole Cortes)

TWO years of heartache is finally over for the University of Baguio (UB) after reclaiming the men’s basketball title in the Baguio – Benguet Educational Athletic League (BBEAL) season 32 last Friday, November 30.

It was a perfect send off for senior John Eric Victorio who will finish his collegiate year on top after leading the Cardinals in sweeping Saint Louis University (SLU) Navigators in game 2 of their best of three finals series at the SLU Prince Bernhard Gym, 84–78.

Victorio top scored for the Cardinals with 16 points on four triples who drew support from another senior, Libert Beejay Caccam, who finished the game with 12 points, seven in the pay-off period after they were trailing by nine points going into the final frame of the ball game.

The Cardinals were trailing by nine going into the pay-off canto but turned the ball game around after a 17–4 run led by Vince Ahron Sibbaluca who finished the ball game with 11 points, six in the fourth period capped by a Caccam short jumper to put UB ahead by four, 74–70 with 2:28 remaining in the ball game.

UB then scored all its important free throws in the final two minutes of the ball game to secure the 25th men’s basketball crown for the Gen. Luna Road based squad who was also undefeated in nine games this season including the finals.

“Thankful ako sa UB at naging part sila ng journey ko. Napakatamis ng championship na to kasi halos dun sa dalawang taon na hindi kami nag champion kahit off season naka training kame,(I’m thankful of UB for being part of my journey. It was a sweet victory because for almost two years of not being the champion even if there was no game we kept on training),” added Victorio.

After a heartbreaking loss in game 1, 79-83, the Navigators overturned a nine point deficit on the first quarter, 29–20, and slowly caught up with UB in the third period, tying the ball game at 44 on a Jed Barrientos free throw.

It was all SLU show in the third period as Shawn Aquisay came up with timely baskets including a three point play with 1:18 remaining as the Navigators enjoy a 57 – 64 advantage.

“After ng third quarter, nasabihan na kame ni coach Joel Flores na dapat stop naming yung main man nila, si Aquisay, kasi siya yung talagang gumagawa for SLU kaya nung fourth quarter halos hindi na naming pinahawak ng bola (After the third quarter coach Joel Flores already told us to stop their main man, who is Aquisay, because he is the one playing for SLU. That is why on the fourth quarter we never let him handle the ball),” added Victorio of the SLU guard who finished with a game high 27 points.

Barrietos, who hit the showers with 1:54 remaining, added 13 for the Navigators while Arjay Gonzales who had 20 points in Game 1, had 11.

But despite the runner-up finish, Austria lauded the effort of the Navigators who made its first finals appearance since 2009.

“It was a good game. Great season for us. We are not expecting to be here with four seniors and eight rookies. Maganda yung pinakita ng mga bata,” summed Austria who endured two losses during the group stage but outplayed Cordillera Career Development College and the Baguio College of Technology in the second phase of the eliminations to claim the third seed in the final four.

The Navigators then outclassed second seeded BCT who has a twice to beat advantage in the semis to earn its first finals appearance nine years. (Roderick Osis)