Palace to public on Duterte 'marijuana' remark: Use common sense 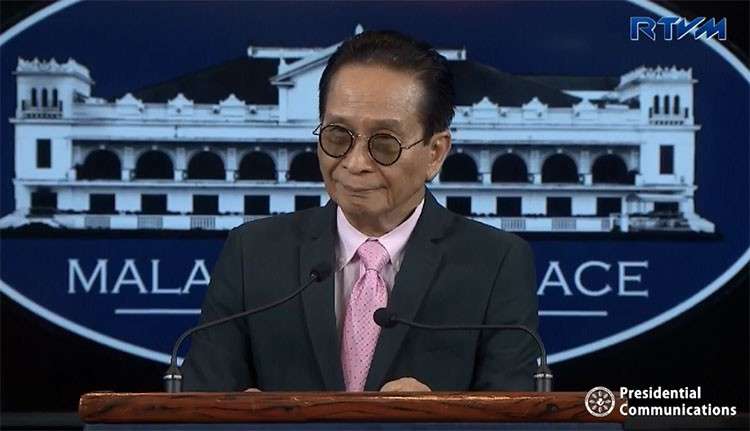 THE public should "use common sense" when President Rodrigo Duterte is speaking so they will know if he is serious or merely cracking a joke, Malacañang said on Tuesday, December 4.

This came after Duterte said in a speech delivered Monday, December 3, that he was "using marijuana" to catch up with the "killing" activities of Association of Southeast Asian Nations (Asean).

But just more than an hour after his speech, the President clarified in a chance interview with Palace reporters that his "marijuana" remark was merely "a joke."

Presidential Spokesperson Salvador Panelo came to Duterte's defense, saying the Chief Executive only wanted to crack a joke to try to cheer up his audience whenever he is delivering a speech.

(Marijuana is not a stimulant to keep you awake. Or the fact alone that it's not stimulant, there's no logic in his pronouncement that he's using it to keep him awake, so the people laughed.)

(One, we use common sense. Number two, we can tell that he's joking if his audience are laughing, because a joke is meant to make us laugh, isn't it? Now, if your audience do not laugh at your joke, that means they're offended.)

Speaking before Asean National Organizing Council on Monday, Duterte bluntly joked that he was taking marijuana to keep himself awake during the 33rd summit and related summits of the regional bloc held in Singapore.

The President made the remark amid his bloody crackdown on illegal narcotics trade that has so far killed thousands of suspected drug offenders.

However, Duterte said on the sidelines of his public engagements at Palace that the public should be used to his "style" of making a joke by now.

He added that only "stupid" people will believe his jokes.

"It was a joke. Nobody can stop me from just doing my style. Minsan, sabi niyo niyo misogynist ako, mag-biro ako nang ganun (At times, you're calling me a misogynist. So I'll joke as if I'm a misogynist). That's my style. It's too late to change," Duterte said.

"If I want to joke, I will joke... Ngayon kung maniwala kayo, eh g*** kayo (Now, if you believe it, you're stupid)," he added. (SunStar Philippines)