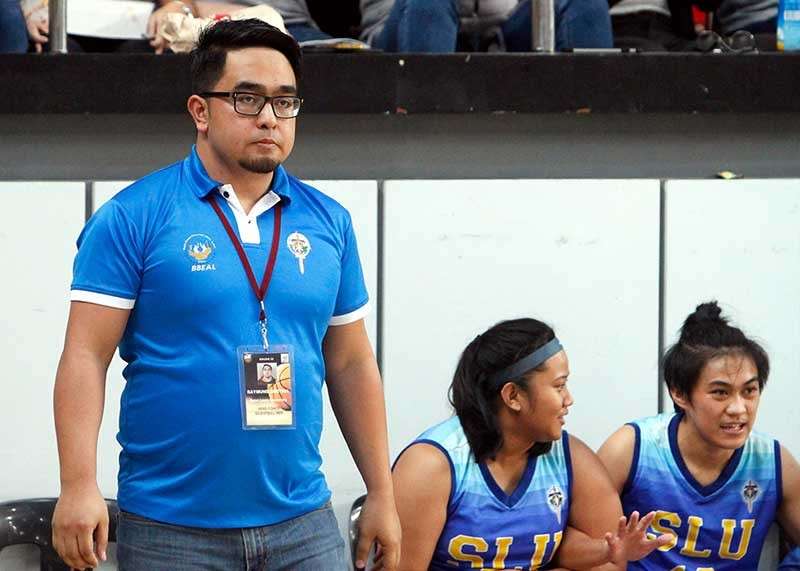 BAGUIO. SLU head coach Raymund Austria is looking forward to having a stint in the national men’s basketball team which he said will be a great help to the local basketball scene. (Photo by Jean Nicole Cortes)

DESPITE missing another chance to capture Saint Louis University Navigators’ first title men’s basketball of the Baguio–Benguet Educational Athletic League, coach Raymund Austria remains positive of his chances on his apprenticeship with the Gilas coaching staff.

The Navigators were swept in two games by University of Baguio Cardinals but Austria lauded the effort of the Navigators who made its first finals appearance since 2009.

“It was a good game. Great season for us. We are not expecting to be here with four seniors and eight rookies. Maganda yung pinakita ng mga bata,” summed Austria who endured two losses during the group stage but outplayed Cordillera Career Development College and the Baguio College of Technology in the second phase of the eliminations to claim the third seed in the final four.

The Navigators then outclassed second seeded BCT who has a twice to beat advantage in the semis to earn its first finals appearance nine years.

Austria was the hands down choice to join the Gilas coaching apprenticeship program according to BBEAL basketball commissioner Djalma Arnedo.

“Coach Raymund has done an exceptional job. He was able to put together a competitive lineup, exceeding expectations. He’s the hands down choice for leading both his men and women’s squad to the final four,” said Austria.

The apprenticeship program was earlier offered by Coach Yeng Guiao during his visit to the city in October.

Guiao added an opportunity can be opened to local coaches for the men’s national basketball team under their apprenticeship program.

“The national team is having an apprenticeship program for coaches. There are windows in the FIBA qualifiers wherein we can accommodate one or two local coaches from all over the Philippines and treat them as part of the national coaching team,” Guiao added.

He said they will be asked to contribute their knowledge and at the same time learn from members of the coaching staff for at least two to three weeks to be able to acquaint their selves on how the national team prepares.

“They will also learn how we coach against other national teams, how we create game plans and adjustments during the game,” added Guiao. (Roderick Osis)