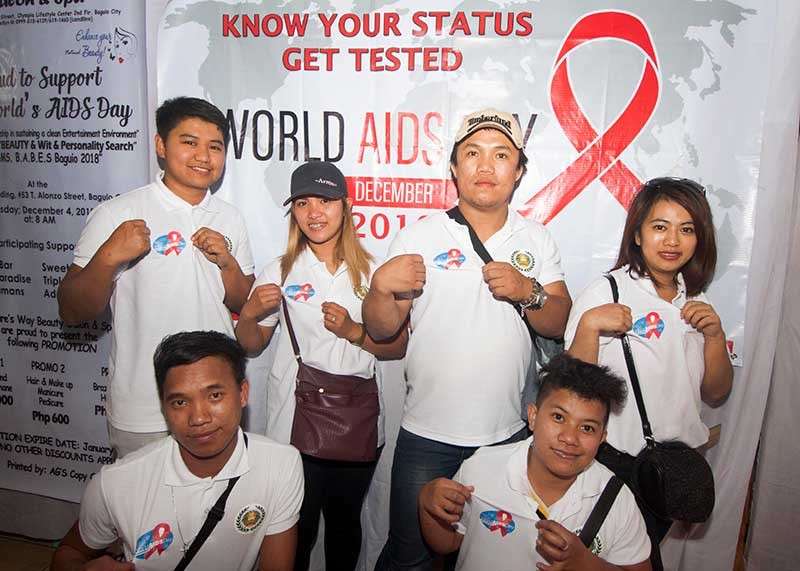 BAGUIO. HIV-Aids advocates show their shirts with the symbolic ribbon to advocate awareness of the disease. More than 9.4 million people do not know that they are living with Aids. (Photo by Jean Nicole Cortes)

A 34–year-old female with HIV-Aids in Baguio City is calling on the Department of Education to intensify its education and awareness campaign among students.

During the Baguio World Aids Day celebration, Rose (not her real name) said that based on her experience with her grade 7 child, no education and awareness programs are being implemented in the schools.

“The threat of having or acquiring HIV-Aids is really serious and having the information and being aware on the negative effects of HIV-Aids especially to the youth is very very important. My daughter told me that there were no educational programs being done regarding awareness of HIV-Aids,” Rose said.

This even with the issuance of DepEd order dated June 13, 2012 which orders the implementation of the School-Based HIV and AIDS Education Program (SBHAEP) of the agency starting with undersecretaries, assistant secretaries, bureau directors, regional directors, schools division/city superintendents, heads, public and private elementary and secondary schools.

Pursuant to Republic Act (RA) No. 8504, otherwise known as the “Philippine Aids Prevention and Control Act of 1998”, and the Civil Service Commission (CSC) Announcement No. 21 dated March 25, 2010 entitled “Guidelines in the Implementation of Workplace Policy and Education Program on HIV and Aids” and in compliance with its duties and responsibilities as a member of the Philippine National Aids Council (PNAC), DepEd will accelerate the implementation of SBHAEP nationwide.

“I was discovered having HIV-Aids some 10 years ago and I would not want my three children to suffer discrimination and instead I want them and all other students to be educated and aware of HIV-Aids for them to know what to do,” Rose said.

Based on the DepEd order, the move is guided by a deep sense of urgency to address the unabated increase in the incidence of Human Immunodeficiency Virus (HIV) infection among key affected populations in high-risk areas in the country.

The Philippines is one of two countries in Asia which has registered a spike in HIV incidence in recent years, while the rest of the region has been experiencing a downtrend on this regard.

The order also states the Health and Nutrition Center (HNC) shall conduct the Orientation and Training Workshops on HIV and AIDS Education among the teaching and non-teaching personnel in identified HIV and AIDS hot spots nationwide.

And as the representative of this Department in the PNAC, the undersecretary for Legal and Legislative Affairs will spearhead the monitoring of the implementation of the program in compliance with the said Order through an immediate dissemination of and strict compliance with this Order as directed.

Dr. Celia Flor Brilliantes of the Baguio Health Department (BHD) earlier stated based on their record there are 28 cases of HIV-AIDS in Baguio City, with 26 of these males and 2 females.

These are coming from the 25-34 age group which are the working class and considered the age group having the most number HIV-Aids not only in the city but nationwide.

Dr. Rowena Galpo also from the BHD explained the number of HIV–Aids cases in the Summer Capital is increasing and sees the need to expand its programs against the spread of the dreaded disease.

“We are looking at the reproductive age, but we also see an increase in cases among the teen ages and youth which is a cause for alarm,” Galpo said.