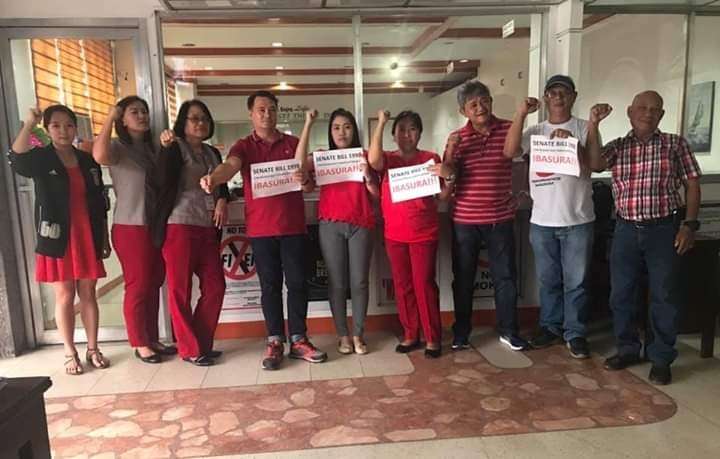 Some of the members of NFA-Negros Occidental Employees Association during the "Red Wednesday" protest at the agency's provincial office in Bacolod City on Wednesday, December 6. (Contributed photo)

The employees brought with them placards as they chant "No to RA 1998" at the agency's provincial office in Bacolod City.

Senate Bill 1998, sponsored by Senate Committee on Agriculture and Food chairman Senator Cynthia Villar, is being pushed by the administration to address the rising inflation.

The bill seeks to lift quantitative restrictions on rice and allow private traders to import rice from countries of their choice. It is also seen to liberalize exportation of the staple commodity.

Maverick Misajon, president of NFA-Negros Occidental Employees Association, told SunStar Bacolod that the "Red Wednesday" protest signifies the "bloody" fight of NFA employees and management against the "anti-farmer and anti-people" provisions of the bill.

Misajon, also the regional president of NFA Employees Association in Western Visayas, said the tariffication will abolish the regulatory function of the NFA as well as its social mandate to provide quality yet cheaper rice in the market.

"The free entry of cheaper rice from other countries will negatively impact Filipino farmers as they cannot compete because of their higher production cost," he said, adding that like what happened with the oil deregulation law "it will allow private people to have control over the food sector particularly rice industry."

On November 26, the employees conducted a "Black Monday" protest to also show condemnation against the legislation and unity for the NFA.

Misajon said the protests in the province are aligned with the movement conducted by employees associations in Luzon.

On Tuesday, the NFA Employees Association in Metro Manila issued an open letter to President Rodrigo Duterte denouncing the enactment of the rice tariffication law.

The group condemns the bicameral conference committee meeting on November 22 that agreed to retain most of the "objectionable provisions" of Senate Bill 1998.

"The reconciled version virtually decapitated the vital stabilization and regulatory functions of the government’s food agency," it said.

The employees association claimed that the absence of stabilization and regulation will expose the rice industry to abuses of unscrupulous grains businessmen.

They said the absence of government control will lead to chaos and spawn a more powerful rice cartel in the country.

Rising inflation and worsening poverty require a strong food agency that will ensure the availability of affordable staple food for the poor and the continued viability of the livelihood of local rice farmers, it added.

Misajon said that, aside from these negative impacts, one of their greatest fears, once the tariffication bill will become a law, is the possible job displacement of NFA employees.

In Negros Occidental, there are 37 member-employees including provincial manager Frisco Canoy as an associate member.

"The opposition against rice tariffication is supported by our managers and regional director," he said, adding that "we are also calling on Negrense congressmen and senators to support us in this continuous battle."