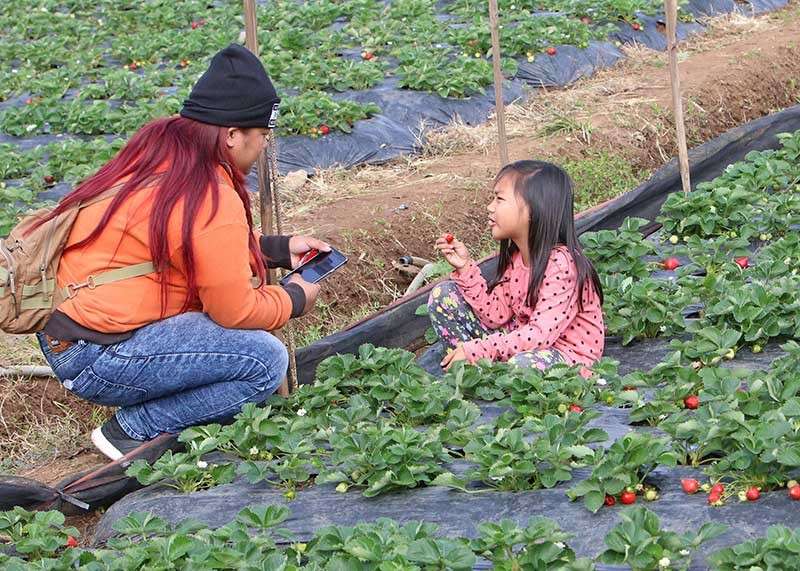 LA TRINIDAD. A mother and child tourists enjoy their strawberry picking at La Trinidad. Despite the recent typhoons, Strawberry picking starts in the valley in time for the possible influx of tourists this coming holiday season. (SunStar Baguio photo)

These materials, he said, will be distributed to the farmers to produce runners for planting.

He pointed out that the imported planting materials, the “shoga” and “sweet charlie” varieties from California, will be bearing fruits by October 2019.

The farmers change their strawberry plants once in a while to produce bigger fruits. They said strawberries produce smaller fruits as they age.

La Trinidad Tourism Officer Valred Olsim said prior to the typhoons, an average of 1,175 metric tons are harvested annually but this went down between 720 to 800 metric tons.

However, he pointed out, there are other strawberry farms in other areas that supplement the town's strawberry production.

Data from the Municipal Tourism office noted some 660 strawberry growers converge inside the 79.49 hectare lot inside the Benguet State University.

“There are available fruits for the strawberry picking activities that tourists coming over here love to do,” Olsim, told the media in a briefing on Friday.

Strawberry picking in this town is done at the Agri-Tourism Business Incubation (ATBI) area, which is managed by the Benguet State University, at the Benguet Agri-Pinoy Trading Center, and at another center managed by private persons, who let visitors pick strawberries as an agri-tourism activity in their farms.

La Trinidad, known for the heart-shaped, juicy red fruit, reported an 80-percent damage in strawberry plants and berries during the onslaught of Typhoon Ompong in mid-September. (With reports from PNA)