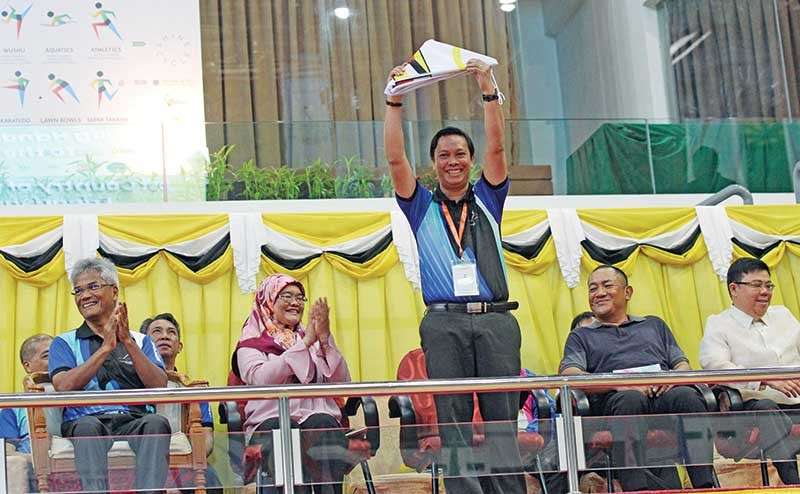 DAVAO. Philippine Sports Commission (PSC) Commissioner Charles Raymond A. Maxey raises the BIMP Eaga Sports Council flag after it was turned over to the Philippines as the host of the 11th Eaga Friendship Games 2020 during the closing ceremonies in Brunei Sunday, December 9, 2018. (Contributed Photo)

BRUNEI - Davao City is being eyed as possible venue after the Philippines formally accepted the 2020 hosting of the 11th BIMPNT-Eaga Friendship Games here during the closing ceremonies of the 10th edition of the Games at the Hassanal National Sports Complex Indoor Stadium here Sunday afternoon, December 9.

In his speech, Maxey lauded Brunei Darussalam for the successful staging of the just-concluded 10th BIMPNT-Eaga Friendship Games and for the wonderful and memorable experiences the host country extended to all delegates.

He, however, hoped further strengthened unity and cooperation through the Games.

"Now, it is with great honor and excitement to announce that the Philippines will be your next host of the BIMPNT-Eaga Friendship Games two years from now," the commissioner from Davao said, adding, "We will make sure that the friendship that we have built over the years of staging the Games will continue to flourish in 2020."

Maxey, in an interview with SunStar Davao, said Davao City could be a possible host for the 2020 Games considering the growing Halal industry in the city.

In a SunStar story on November 21, 2018, Davao City Chamber of Commerce and Industry president Arturo Milan said that they are eyeing Quezon Boulevard as the site of the Halal food street due to the large number of Muslims living in the area.