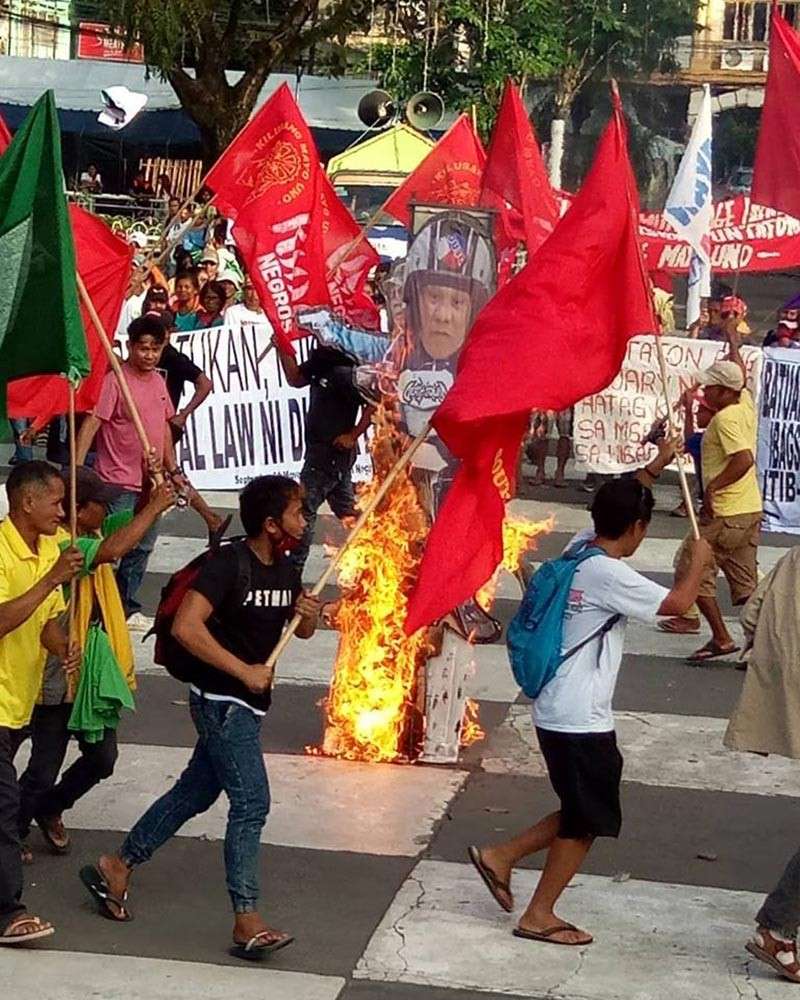 BACOLOD. Some members of progressive groups in Negros Occidental burn the effigy of President Rodrigo Duterte during the commemoration of the International Human Rights Day in Bacolod City public plaza on Monday, December 10. (Nonoy Espina)

MORE than 1,000 members of progressive groups in Negros Occidental gathered in Bacolod City on Monday, December 10, to commemorate the International Human Rights Day.

Holding placards and effigy of President Rodrigo Duterte on a motorcycle, the groups gathered from the South Capitol Road and Lupit Church to marched their way to the public plaza.

Clarizza Singson-Dagatan, secretary-general of Karapatan-Negros, said the effigy symbolized the “riding-in-tandem” scheme of the present administration, which is used as their strategic approach in their “war on drugs.”

”The war against narcotics of the Duterte administration resulted to numerous killings of the alleged drug personalities even without due process which is a clear definition of human rights violation,” she added.

During the program, leaders from different groups delivered their speeches, stressing the call for justice against victims of human rights, the effect of Tax Reform for Acceleration and Inclusion Law, and extrajudicial killings.

The groups called on President Duterte to stop the militarization in some areas in the country.

They also continue to seek justice for the death of the nine farmers who were brutally massacred in Sagay City on October 20, and the death of lawyer Benjamin Ramos Jr., who was gunned down in Kabankalan City on November 6.

The program ended with the burning of President Duterte’s effigy, a sign of their protests against his administration.

For his part, Michael Dela Concepcion, secretary-general of Bayan-Negros, said the activity is a call for all Negrenses to always fight for freedom and to never allow injustices.

Meanwhile, Colonel Benedict Arevalo, commander of the 303rd Infantry Brigade of the Philippine Army based in Murcia said: “The Army in Negros is one with the Negrenses in condemning the human rights violations of the Communist Party of the Philippines-New People’s Army (CPP-NPA) against innocent civilians both young and old as evidenced by their numerous killings, burning, extortion activities, and recruitment of minors to their terrorist organization.”

”I also condemn those militant left-leaning human rights groups together with their affiliated organizations who always use lies and deception to discredit the government and manipulate people's minds,” Arevalo said.

“Several, if not many of them, are bogus human rights advocates. Not all who shouts human rights are genuine advocates. A number of them only masked themselves using human rights when in fact and in truth they support openly or secretly the NPAs who are the real human right violators,” he added.

He urged the public to continuously condemn the human rights violations of the NPA in order to pressure them to put an end to their violence and terroristic acts. (Christopher D. Yanson, CHMSC-Talisay intern)