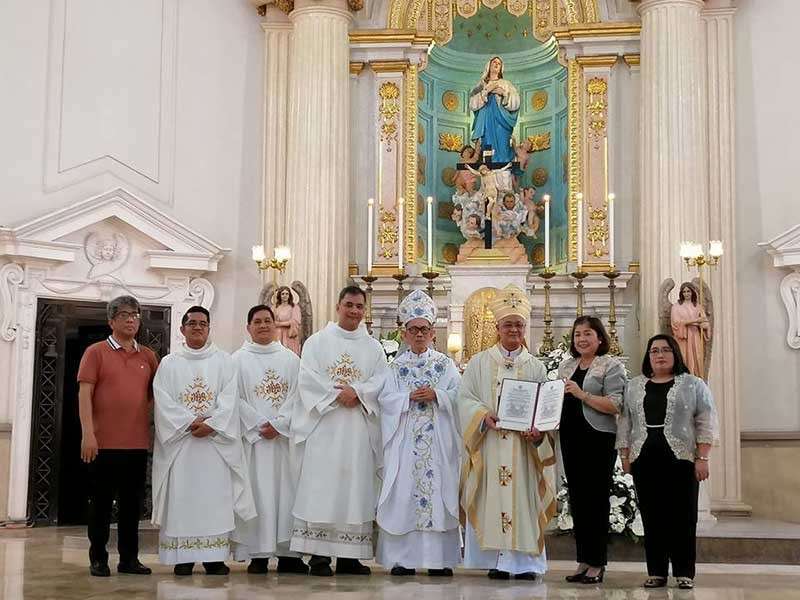 THE Metropolitan Cathedral was declared an “important cultural property” Tuesday, December 11 by the National Museum of the Philippines.

National Museum of the Philippines’ Cultural Properties Regulation Division deputy chief Raquel Flores and administrative officer Carmencita Mariano led the declaration, while the clergy led by Archbishop Emeritus Paciano Aniceto and Archbishop Florentino Lavarias and the laity witnessed the signing of the declaration.

Flores said that the cathedral passed and is in compliance with the national law and the resolution of the National Museum which assessed the cathedral’s exemplary aesthetics, engineering, architecture, history, and religious and social impacts.

It is stated in the National Museum's Resolution No. 21–2017, that the Constitution of the Republic of the Philippines provides that “the State shall promote and popularize the nation’s historical and cultural heritage and resources" and assures that the Cathedral's protection, preservation and promotion are intact.”

Flores also complimented the Cathedral's neo-classic design and the Fernandinos' devotion and spirituality.

The Metropolitan Cathedral was founded by the Augustinians in 1754 and placed under the advocation of the Nuestra Señora de la Asuncion while the town was under the patronage of San Fernando III. Fr. Sebastian Moreno, OSA, was named pro-vicar in 1756.

In its recently installed marker, it is noted that the stone church may have been built by the end of the 18th century. Both church and convent were burned by the Philippine Revolutionary Army, on order of then General Antonio Luna on May 5, 1899.

It was restored by Kapampangan Architect Fernando H. Ocampo in 1948, then elevated to Cathedral on December 11, 1948 as the seat of the newly created archdiocese.

On October 1, 1981, it was established as Metropolitan Cathedral under the titularship of St. Ferdinand and the Patronage of the Lady of Our Assumption.

“Metropolitan Cathedral is a very beautiful place. It has its own neo-classical touch to it, but most of all, it manifested this enduring faith among Fernandinos. I can see how devoted they are in religious aspects, and how faithful they are to their church,” Flores added.