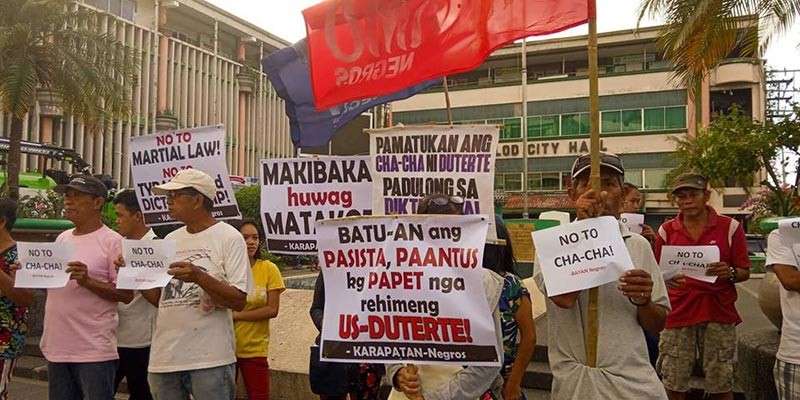 NEGROS. Some members of the militant groups in Negros Occidental during a protest at the Fountain of Justice in Bacolod City Wednesday, December 12.

SOME members of the militant groups in Negros Occidental gathered at the Fountain of Justice in Bacolod City on Wednesday, December 12 to oppose charter change and extension of martial law in Mindanao.

Michael Dela Concepcion, secretary-general of Bayan–Negros, said the protest was a way to show the resistance of different sectors on the third Mindanao martial law extension.

Congress approved on Wednesday the resolution extending for the third time the martial law in Mindanao until December 31, 2019.

It was on December 13, 2017, when Congress approved the extension of martial law in Mindanao for the second time, less than six months after the lawmakers first extended Duterte’s martial law declaration following the Marawi siege in May 2017.

For her part, Clariza Singson, secretary-general of Karapatan–Negros, said they expected the extension of martial law in Mindanao which records a massive human rights violation.

“The extension of martial law in Mindanao will repress and stop the people for participating in the upcoming election. This extension will also allow those who are in posts to continue their power which will lead to abuse of power and massive human rights violation,” she added.

During the program, the group also stressed the impact of charter change, which could endanger the Filipino people, particularly in Negros Occidental. (Christopher D. Yanson, CHMSC-Talisay Intern)