Bacolod gets award for good governance 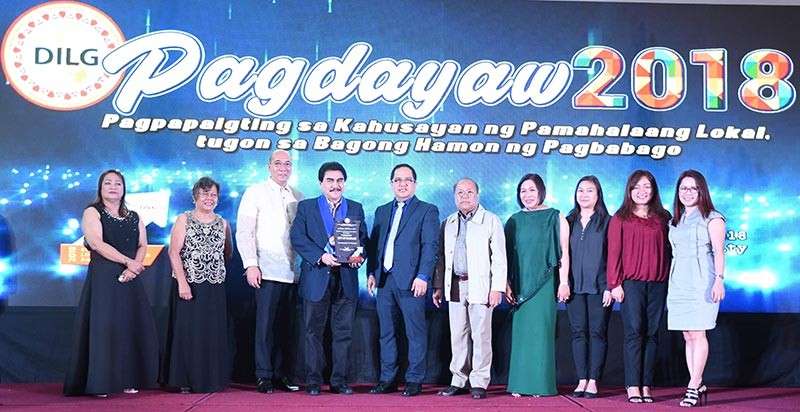 ILOILO. Local officials led by Mayor Evelio Leonardia receive the award for Bacolod as first runner-up in the “Excellence in Administrative Governance” category of the Department of Interior and Local Government 2018 Regional Seach for Excellence in Local Governance (Excell) held in Iloilo City on Wednesday, December 12. (Contributed photo)

THE City Government of Bacolod was recognized by the Department of the Interior and Local Government for excellence in administrative governance.

Mayor Evelio Leonardia received the award for Bacolod City as first runner-up in the “Excellence in Administrative Governance” category at the awarding ceremony of the DILG 2018 Regional Seach for Excellence in Local Governance (Excell), dubbed “Pagdayaw,” held at Diversion 21 Hotel in Iloilo City.

Leonardia thanked the DILG for the award. “Together with the many awards we received recently, this DILG award will serve as an inspiration for us to do better,” the mayor said.

The Excell Awards 2018 was an annual activity of DILG to recognize the commendable performance of the local government units (LGUs) for excellence in local governance.

In November, Bacolod was recognized as the Most Competitive City in Western Visayas by the Regional Development Council.

In October, Bacolod received a Special Citation for the Most Business-Friendly Local Government Unit (LGU) Awards under the City Level 1 category by the Philippine Chamber of Commerce and Industry.

This year, Bacolod was the first runner-up in the Search for Top Philippine Model City award. It was the champion in the same search in 2017. (PR)