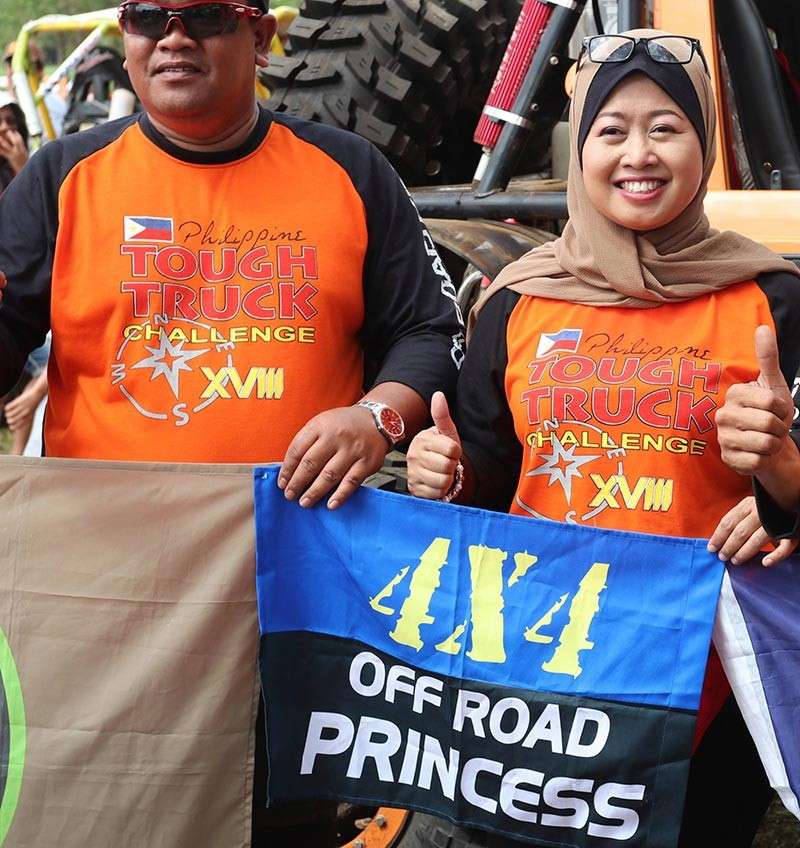 HER charm has captivated Filipinos but her heart belongs only to her husband and to the 4WD racing.

And it’s not just an ordinary racing. It is the rugged type of 4WD racing in the jungles of Malaysia and other rugged terrains in many locations all over the world.

Nama Juraidah bt Jantan is considered as the Princess of Malaysian 4WD racing despite of not having a single drop of noble blood. “You see one time during the Rain Forest Challenge (RFC) in the Malaysian state of Johore, their King Sultan Ibrahim Iskandar noticed that I was the only woman racer in the event. So he called me princess. From then on everyone in the 4WD world calls me Princess,” she said with a smile in an interview during the 13th and last leg of the Philippine Tough Truck Challenge XVII at the Libona Central School grounds in Bukidnon.

She is indeed more than princess to her husband Mohd Rahim Bin Sarkam, the main reason why she was introduced and became passionate with 4WD races. She gave him five children who are all in their house in Kuala Lumpur, Malaysia every time she goes out of town with her husband to race or just enjoy meeting with friends and racers.

To everyone in the 4WD racing circuit, she is a sister, a mom and a mentor. She is just passionate with everything that concerns with the 4WD, the vehicles, the tires, the spare ports, the drivers, and the crew. In fact I have to stop her when she discussed about the technical side of the race, telling her that “Mam please I don’t even know how to drive.”

She credits her husband for introducing her to the sport. “My husband was already a driver and a racer of the 4WD circuit and I was unhappy he always left me alone with the kids in the house every time he goes to race. So I told him that I have to go with him. From then on he had no choice but to tag me along,” she said during the press conference for the Philippine Truck Challenge last Friday before the race.

She brought a team from Borneo, the Sabah Four Wheel Drive Association to participate in the 13th and last leg of the Philippine Tough Truck Challenge XVII at the Libona Central School grounds, Bukidnon last Sunday.

The Sabah Four Wheel Drive Association was the only foreign team to join the competition.

She started to get involved in the 4WD racing 10 years ago when her eldest child was only 9 years old. He daughter is now 19-year-old and she is also starting to enjoy 4WD racing.

“I won the Ladies race in the RFC in India in 2010 because I was the only participant,” she said with a big laugh. Now she still participates but doesn’t race anymore. “I just inspire and help lady racers. There are many lady drivers now and they are good,” she added.

Aida now is the RFC International officer and takes charge of the marketing the promotion of the Malaysia based company.

The RFC is a sports/adventure tourism event, company first launched in Malaysia on November 23, 1997 and since then it has attracted participants and media from around the world.

It is a tough event for 4WD enthusiasts who dream of taking on a jungle adventure with all its hardship, endurance and extremities. Now the company has races all over the globe. They will start their 2019 season in April next year with four consecutive races in difference parts of Russia.

Aida also helped the Philippine contingent during the RFC event in Borneo last year that is why she very close to the Filipinos. She provided them with spare parts, extra vehicles and everything she could help.

“After this event I will fly to Manila and Pampanga to see my Filipino friends to say hello to them. You see this is what I love in these races. We are united and we make lots of friends,” she added.

It was also for the first time she has been to Mindanao and to Bukidnon. “It is a very nice place. I enjoyed it here.”

She maybe be known as the princess of 4WD but for Filipino 4WD enthusiasts she is already their queen.