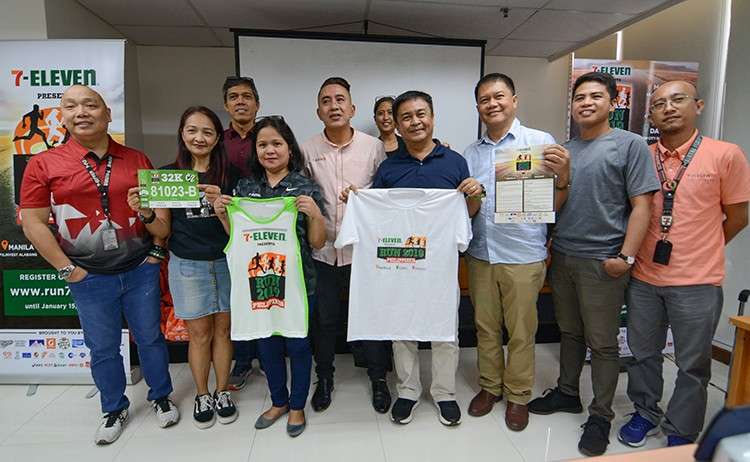 Great Incentive. Jose Ang Jr. (left) and the other organizers of the 7-Eleven run series are offering more than P1 million in prizes--including P500,000 to the runners who can break the men’s and women’s records. (SunStar Foto / Arni Aclao)

THE country’s running scene just got exciting as the 7-Eleven Run Series 2019 is dangling P500,000 to the male and female marathoners who can break the national record on Feb. 3.

This development was announced by Jose Ang Jr., the general merchandise head of Philippines Seven Corp., on the event’s launching in the Visayas on Friday, Dec. 14 at the Trends Plaza Building.

“This run is created to help nurture future runners or even the old-timers. We want to motivate them to keep on improving with the hope to see them represent the country in the international stage,” he said.

The huge cash incentive is intended for the 42-kilometer runners. Both men’s and women’s divisions will have a separate cash purse, bringing the total to P1 million.

Records are made to be broken, as the old saying goes. But it’s going to be a tough one for those who are gunning to shatter the national benchmarks held by Olympian Eduardo Buenavista at 2 hours and 18 minutes in the men’s division and bemedalled Christabel Martes at 2:38 on the women’s side.

Organizers said the event is sanctioned by the Philippine Athletics Track and Field Association, the country’s governing body for track and field. The route in three different areas will be measured and checked before the race.

The overall Filipino Top 3 in the 42K, 32K and 21K will get the slot at an international marathon in Asia, paid for by the organizers. In the last edition, the winners were sent to the 23rd Jeju International Tourism Marathon Festival in South Korea.

“The cash prize is for everybody to win. The foreign runners, if they place, they can win it. But the ticket to the marathon in Asia will be exclusive only to Filipino runners,” said Ang.

The previous edition of the simultaneous race racked in a total of 35,000 registrants with the Cebu leg accounting for more than 5,000 participants.

The organizers said they are hoping to increase that number for the 2019 race. The Cebu leg will be held at the Cebu Business Park.

The runners-up in every category will also get cash prizes. RSC