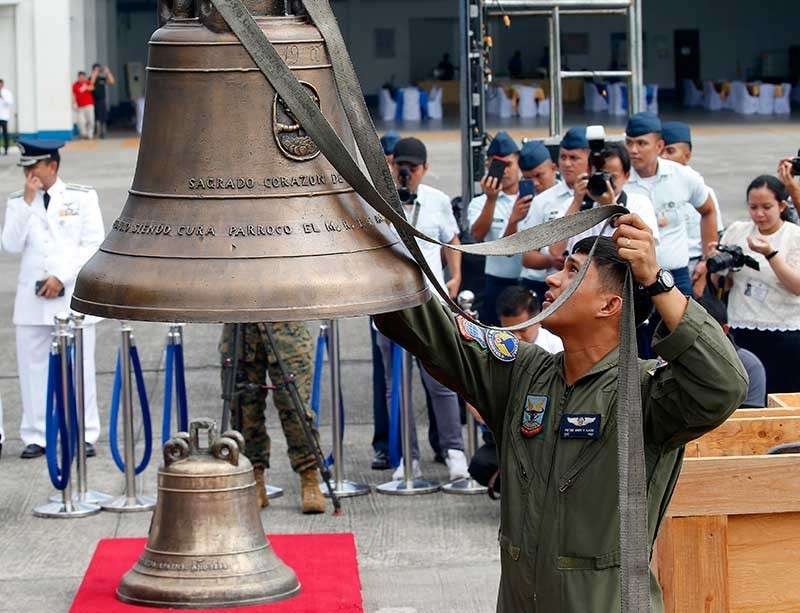 MANILA. Philippine Air Force personnel unload the three Balangiga bells seized by American troops as war trophies more than a century ago. The bells are handed back to the Philippines Tuesday, December 11, 2018. (Al Padilla/SunStar Philippines)

HOMESTAY facilities in Balangiga are being prepared, local tourist spots are being enhanced and the residents are being trained on tourism services in anticipation of the swarm of tourists who are expected to descend on this small Eastern Samar town.

Tourism Secretary Bernadette Romulo-Puyat assured Saturday, December 15, 2018, that the Department of Tourism (DOT) is ready for the influx of tourists who would wish to see the three Balangiga bells restored in the town’s old church.

“We, at DOT, are so happy for the people of Eastern Samar as the homecoming of Balangiga Church bells may yet turn not only Balangiga town but the whole of Eastern Visayas (Region 8) into an emerging tourist destination. In time for the Christmas season, this is one of the best gifts the region could ask for,” Puyat said in a statement.

The bells were taken as war booty by American troops who massacred the townspeople in 1901 to avenge the death of fellow soldiers in an attack by Filipino guerrillas upon the tolling of the bells.

After more than a century, the United States government has agreed to return the three bells, which were scheduled to be restored in ceremonies led by President Rodrigo Duterte on Saturday.

“Foremost of these is the improvement of the Balangiga Incident Marker, funded under DOT-Yolanda Comprehensive Rehabilitation and Recovery Project worth PhP9.7 million, which was downloaded to the LGU,” Tiopes said.

The improvement includes landscaping and beautification of the park and the small museum located at the back of the marker to make it more presentable to tourists and pilgrims who will be visiting the town. The marker was sculpted by National Artist Napoleon Abueva and inaugurated on September 28, 2003.

“Enhancing other tourist destinations in Balangiga will make visitors stay longer, giving them the oppportunity to get to know our people, experience our culture, taste our cuisine and discover the Infinite Escapes in Eastern Visayas,” Tiopes said.

The DOT is also encouraging residents to take part in the government’s homestay program to accommodate visitors. Under this program, the locals rent out a room or two to visitors allowing them to earn and the visitors to immerse in Filipino culture.

“For this Saturday's event, the LGU talked with residents to accommodate guests who will stay there overnight. To make this all sustainable, we will assist them in organizing homestay facilities,” said Tiopes.

Balangiga, with a population of about 14,000, is a fourth-class town along the southern coast of Samar facing the Leyte Gulf. It is around 97 kilometers or one-and-a-half hours of travel by car from Tacloban City in Leyte, the regional capital. (MVI/SunStar Philippines)