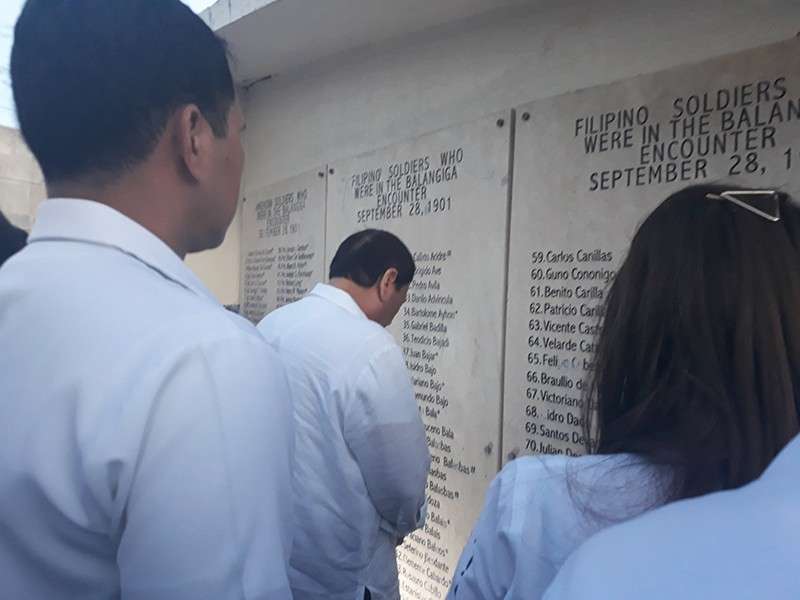 EASTERN SAMAR. After the ceremonial turnover of the Balangiga bells, President Rodrigo Duterte prays for the Filipino soldiers who were in the 1901 Balangiga encounter. (Ruth Abbey Gita)

BALANGIGA, Eastern Samar -- President Rodrigo Duterte on Saturday, December 15 was euphoric over the return of three Balangiga bells taken by the United States (US) more than a century ago.

During the formal turnover of the historic bells here at Balangiga auditorium, the President said he shared the same “happiness and joy” the local residents were feeling.

Duterte said the efforts of both the US and the Philippines to ensure the repatriation of Balangiga bells, have finally paid off, despite the “long and tedious process.”

“Today’s gathering is indeed a time to be truly sentimental as we welcome back our Balangiga Bells. It has been 117 years since these bells were taken away from us. Yet, we never lost hope that someday, these treasures will be returned to where they belong,” Duterte told Balangiga residents.

“But the long wait is over. The rest of the Filipino nation joins the Diocese of Borongan in celebrating this historic event. Indeed, this victory is the result of the optimism and solidarity and patriotism of those behind the bells’ return, just [like] when our forefathers fought for freedom against foreign domination more than a century ago,” he added.

Ecstatic by the Balangiga people's warm welcome, Duterte tolled one of the three Balangiga bells seven times, kissed it, and even raised his hand as he rejoiced for the historic repatriation.

Duterte is the first Philippine president to toll the Balangiga bell since the three church bells were taken at San Lorenzeno de Martir church by US forces as war booty in 1901 during the Philippine-American war.

After the turnover rites, Duterte also prayed for the wounded and slain Filipino soldiers during the 1901 Balangiga encounter.

Duterte also thanked all the stakeholders who contributed to ensure the return of the Balangiga bells to the country, stressing that the homecoming of the artifacts is “truly a milestone in the shared and meaningful history of the United States and the Philippines, and heralds a new and more vibrant chapter in our bilateral relations.”

“You know, the bells are returned and it was really because of the fervent prayers of the entire Filipino nation,” he said.

“Nobody but nobody can claim a singular credit for the generous act of the Americans. The bells are returned. The credit goes to the American people and to the Filipino people. Period,” Duterte added.

Duterte was confident that the Balangiga residents and all the Filipinos would ensure the protection of these church bells and would continue to preserve and promote the nation's culture and history.

“I congratulate the Filipino people for forging a history that [we] could all forever be proud of,” he said.

“I am sure that our ancestors are celebrating with us here on this remarkable victory and that does not only bring back the glory of the town of Balangiga, but also contributes in the full restoration of our dignity as a Filipino,” the President added. (SunStar Philippines)