‘The bells are home now in Balangiga where they belong’ 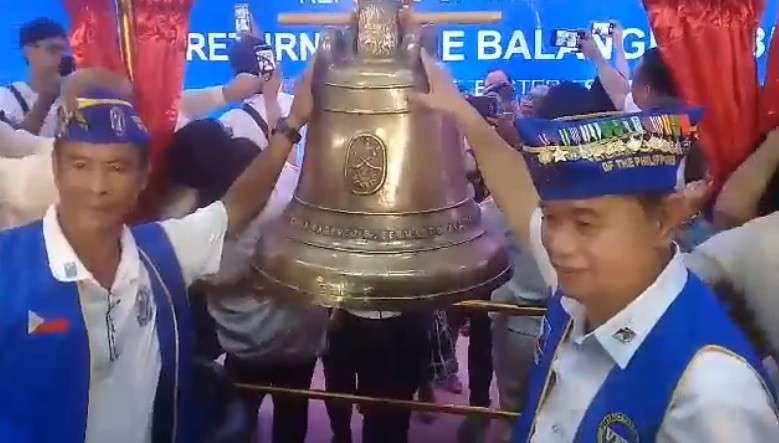 EASTERN SAMAR. Residents of Balangiga in Eastern Samar welcomed Saturday the return of the bells that were seized by American troops more than a century ago. The bells were turned over to the Diocese of Borongan and officials of Balangiga town on Saturday, December 15. | Via Ronald Reyes

RESIDENTS of Balangiga in Eastern Samar on Saturday, December 15, finally have their three historic bells again after they were taken away from their town’s church 117 years ago.

“I am sure that our ancestors are celebrating us here in this remarkable history,” said President Rodrigo Duterte during the formal turnover ceremony of the bells at the town’s plaza.

According to Duterte, the return of the bells signified “full restoration of our dignity as a Filipino.”

Duterte, however, warned that no one should take credits on the return of the bells except the American and Filipino people “through their fervent prayer.”

“Many Filipinos of good heart and good will work tirelessly for decades for the return of the bells... The bells are home now in Balangiga where they belong. These bells are yours,” said John Law, deputy chief of mission of the United States (US) Embassy in the Philippines.

“Our relationship has withstood difficulty and it flourishes today,” said the US official.

“Today, we remember our past and look forward at our enduring relationship...We don’t take this friendship for granted,” said Dr. Philip Felter who represented US Defense Chief James Mattis.

Reverend Crispin Varquez, the bishop of the Diocese of Borongan, thanked the American and Philippine government officials who have been working on the return of the bells.

“Please be assured that we will return the bells to their original purpose, and care and cherish them for its precious legacy,” said Varquez as he lauded the “faith and heroism” of the Balangiga residents who rose against the American forces in September 28, 1901 which is now famously known as “Balangiga Encounter”.

“The bells bridge us to God and to one another. They are part and parcel of our daily life in this community, courage, heroism love for freedom and democracy. We owe it to our forebears,” the bishop said.

According to Varquez, the arrival of the bells “will help bolster our dignity and socio-economic progress”

“We courageously express our commitment that we will do everything we can that these bells will not be separated from us again. They will remain in this church. Never again, Balangiga, these bells will be taken away from you,” he added.

“The bells’ repatriation underlines deeper appreciation of respect and friendship,” added Romulo Valles, the archbishop of Davao and president of the Catholic Bishops Conference of the Philippines.

Valles then called the turn-over ceremony as “a very joyful event.”

Meanwhile, Balangiga Mayor Randy Graza expressed his gratitude for the “magnanimity” of those behind the return of the bells.

“We know what happened to these bells. For over a century, Balangiga waited. The bond between Balangiga and these bells were never broken,” said Graza.

According to Graza, the dream of his people “is now finally turned into a reality.”

“With their return back to the belfry where they once hang, this sad episode in our nation’s history comes to a close,” reiterated Jude Acidre , second nominee of Tingog Sinirangan and whose family roots come from Balangiga.

According to Acidre, two of his ancestors were among the Filipino soldiers who were in the Balangiga Encounter.

“Both are well-remembered as heroes,” Acidre said.

In her House Resolution No. 2371 received by the Congress on December 13, Romualdez called for the recognition and commendation of the “bravery, courage, and sacrifice of the unarmed heroes of Balangiga and the Parish of Saint Lawrence, Deacon and Martyr.”

The plot against the American garrison in Balangiga was led by Police Chief Valeriano Abanador, captain Eugenio Daza, and Sergeant Pedro Duran Sr., and five other unarmed individuals. (SunStar Philippines)