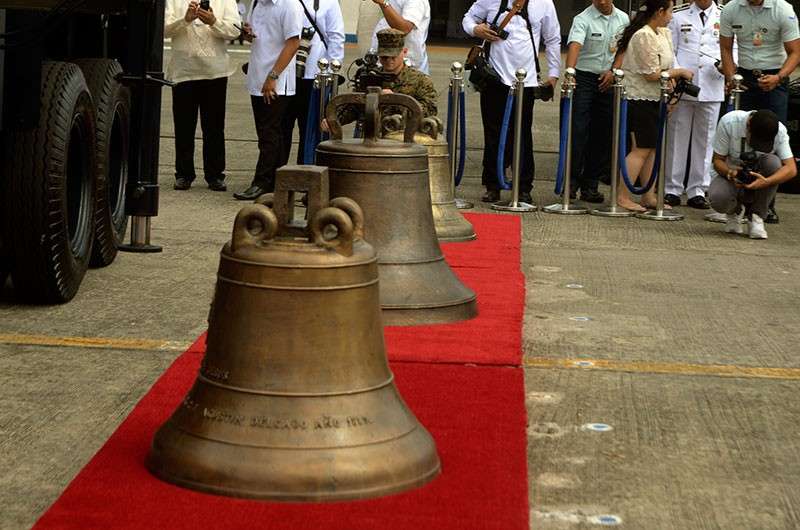 MANILA. In this photo taken on December 14, 2018, the three Balangiga bells are being readied for transport back to the church in Balangiga, Eastern Samar, more than 100 years after they were taken as war booty by American soldiers. (Al Padilla/SunStar Philippines)

MALACAÑANG on Sunday night, December 16, clarified that there was no animosity between President Rodrigo Duterte and some Church leaders during the turnover of the Balangiga bells as implied by a social media post of the Diocese of Borongan.

Presidential Spokesperson Salvador Panelo said the President, shortly after arrival at the Balangiga town plaza, approached the Church leaders and "exchanged pleasantries with them."

"He likewise acknowledged their presence in his brief remarks. The Chief Executive even mentioned in his speech that the Filipino nation is one with the Diocese of Borongan in celebrating this historic event," Panelo said in a statement.

"All went well and only the uproarious rejoicing of the Balangiga people and the guests who attended was the contaminating mood at the gathering," he added.

Panelo said an investigation is being conducted on a news report quoting a Balangiga priest as saying that a member of the Presidential Management Staff (PMS) asked some of the members of the Catholic clergy to leave the event before the President's arrival.

Panelo said he was present during the turnover ceremonies and he "did not see any occurrence as described."

Panelo added that he did not hear of any complaint from the Apostolic Nuncio of the Philippines Gabriele Caccia and Catholic Bishops Conference of the Philippines (CBCP) president Archbishop Romulo Valles, with whom he talked to just before the President's arrival.

If the incident indeed happened, Panelo said it was not sanctioned by the President and may have been done by someone who represented himself or herself as a staff from the PMS.

"It is absolutely out of the President's character nor his style to cause mortifications during an event. If it indeed happened, then the same is not authorized and such unethical conduct can not be sanctioned by PRRD. It could have been done by someone who represented himself or herself as a staff from the PMS," Panelo said.

He said the priests were seated in the same place before and after the arrival of PRRD.

Caccia and Valles were seated in the front row and Duterte approached them and exchanged pleasantries with them, Panelo said.

"This is a time when all Filipinos, regardless of political affinity or religious outlook, come together and rejoice an event which we had long sought - and hoped for. We will not allow such a reported unwanted incident to spoil this momentous occasion. The tolling of the Balangiga Bells ushers in a call of unity and peace among us Filipinos. We can only respond in heartfelt approbation. (MVI/SunStar Philippines)