A sideline can be the real deal 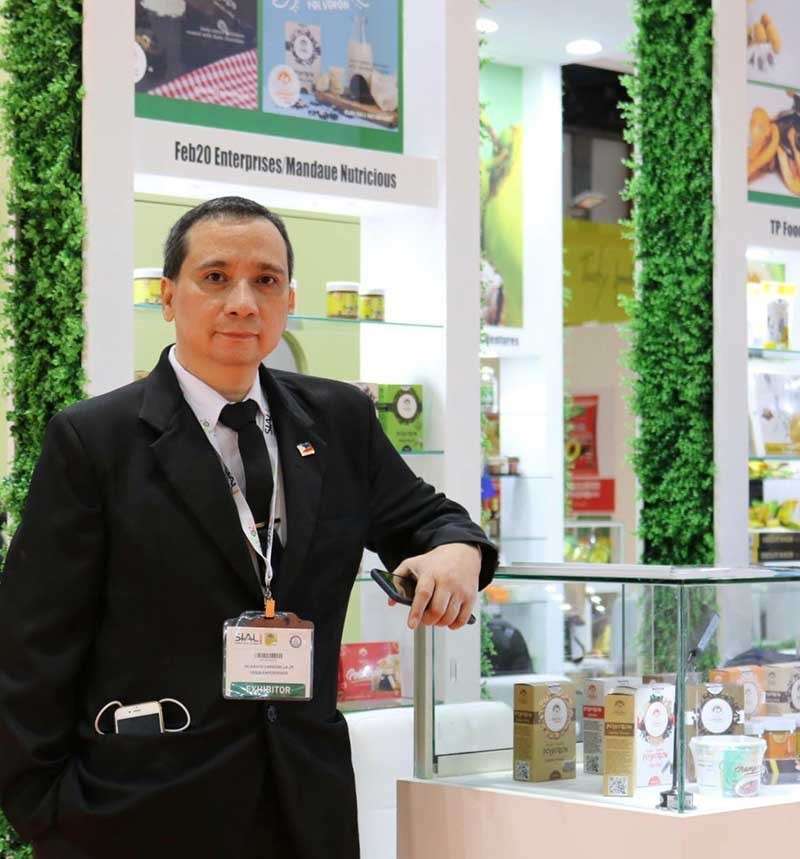 SIDELINE NO MORE. Ditching law school to sell polvoron full-time may have been the best decision for Nicerato Carbonilla. (Contributed photo)

NEVER be ashamed to seek government support if you want to grow your business.

This was the advice of Nicerato “Jun” Carbonilla, founder of Feb20 Enterprises, the company behind the brand Mandaue’s Nutricious.

Feb20 Enterprises is engaged in the manufacturing and processing of local food delicacies such as polvoron, instant champorado, processed peanuts and masareal, among others.

Carbonilla’s venture into food manufacturing was something he did not expect. He never thought the polvoron he sold on the side while studying law would grow into a big business that would take him and his family places.

Carbonilla was a customs administration graduate of the Cebu Central College (now University of Cebu). Prior to becoming an entrepreneur, he worked in an export company, and later on in a cooperative as a human resource and credit and collection manager. He also ventured into the real estate and insurance industries.

Feeling there was something more to life than just being an employee, Carbonilla enrolled in law school to seek greener pastures. He also thought that by becoming a lawyer, he could help his family settle legal concerns.

“Law school is close to my heart. I wanted to be a lawyer,” he said.

But the fulfilment of his dream was delayed. He worked hard to pass the bar exams but failed three times.

“It was on my last try when a lawyer friend suggested that I should grow my polvoron business. In short, he was suggesting that I should take a break and consider other windows of opportunity,” he recalled.

Saddened by the outcome, he heeded the advice of his friend and family. He sold his polvoron full-time, a venture which helped a relative finish his studies.

“I also admitted to myself that I had to stop because we had already spent so much on review classes, transport to Manila and other admission fees. It was both financially and emotionally straining, not only for me but also for my family,” said Carbonilla.

Carbonilla sought encouragement from watching videos of entrepreneur-turned-millionaires, while convincing himself that lawyering wasn’t for him yet.

From the earnings he saved from being a real estate broker and an insurance agent, Carbonilla invested an initial P150,000 to buy basic equipment for the business. He also invested heavily in product quality and packaging.

“Polvoron is not a new product. It has been here for a long time, and the only way for me to be competitive was through innovation. I tweaked the product a bit and invested heavily in the packaging. It had to be presentable so consumers would pick it from the shelves,” he said.

Determined to grow what he started, Carbonilla brought the product to malls through trade fairs. He personally gave out flyers and invited mall-goers to taste their products. This caught the MCCI’s attention.

“If there’s one thing I learned in running a business, you should never underestimate the counsel of good friends. Plus you have to be open to opportunities,” he said.

The company’s membership with MCCI ushered opportunities in business and personality development.

“I opened myself up to more business training. I embraced the change that was before me. Maybe this was where God wanted me to be. The MCCI brought us to one of the biggest fairs that allowed us to get a big account, which is Shamrock. That is still with us up to this day,” said Carbonilla.

He added it was also the strong support of the business chamber that allowed him to be confident to tap into government’s resources and other retail clients.

He approached the Department of Science and Technology (DOST) to seek assistance, as they could no longer handle the volume of orders. For the second time, he heeded the advice of a friend to reach out to government.

Carbonilla admitted he was a bit hesitant at first.

“I thought it was impossible for me to get assistance. I didn’t know anyone from the inside,” he said.

In 2016, Jun brought some sample products for officials of the DOST 7 to evaluate. They saw the products’ market potential and granted the company P2.2 million in technical assistance, which included machines and other product development training.

The amount was a rent-to-own scheme, payable within five years. The DOST 7 also extended other training such as those in good manufacturing practices.

Polvoron has become the bread and butter of the company. Carbonilla said they were able penetrate retail stores and other pasalubong centers across the country.

But knowing that high sales wouldn’t always be on their side, Carbonilla started diversifying the company’s product lines.

They produced other products, the most recent of which was the instant champorado, an alternative breakfast meal and snack for people always on the go.

I worked in an export company after graduating from college. It was a company that produced mango puree. I think it was the first mango puree for export in Cebu. I had a good run there because it exposed me to various operations in export, which I am now adopting in my business, especially now that we are also serving markets abroad.

I went full-time in business after failing thrice in the bar exams. I had a growing family to support, so that time, after heeding the good advice from my wife and close friends, I put my dream of becoming a lawyer in the backseat. I worked on the business that has been there, on the side, waiting to blossom.

At first, I didn’t believe my lawyer-friend, who said our product had market potential. I thought he said what he said because he wanted to make me feel good. But when I heard the positive feedback from customers and saw the business growing, I realized I was on the right track. It’s as if God aligned all the people I needed to make this endeavor prosper.

It’s a business that is easy to sell. Polvoron is already a popular product, and it is not difficult to sell. You just have to package it well and add more flavors to widen your market base.

My stint in the corporate world helped me a lot. I learned more about sales and marketing during my days as a real estate broker and insurance agent. I was able to operate and run the business well by adopting the good practices I learned in the export business. My stint as a human resource manager also helped me develop a healthy relationship with my employees.

Failures are important for personal growth. It inspires you to become a better person and a better business owner. If it weren’t for the failed bar exams, I would not have been able to maximize my potential in business. God has better plans, and all we have to do is to trust His timing.

Lastly, failures don’t mean closing doors or chapters. They mean opening of another opportunity, a chance for someone to grow.