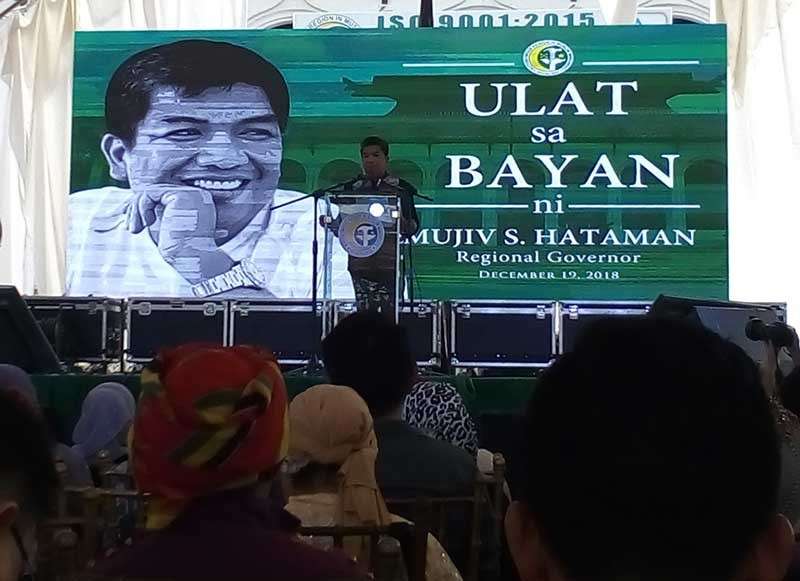 ZAMBOANGA. Governor Mujiv Hataman of the Autonomous Region in Muslim Mindanao on Wednesday, December 19, urges the ARMM residents to actively participate in the plebiscite for the ratification of the Bangsamoro Organic Law next year as he delivers his last “Ulat sa Bayan” in Cotabato City. (Bong Garcia)

GOVERNOR Mujiv Hataman of the Autonomous Region in Muslim Mindanao (Armm) urged residents in the region to actively participate in the conduct of the plebiscite that would ratify the Bangsamoro Organic Law (BOL).

Hataman made the call on Wednesday, December 19, when he delivered his last “Ulat sa Bayan” at the Office of the Regional Government (ORG) in Cotabato City.

(I enjoin everyone to participate in the plebiscite. To vote for a more united, just and fruitful future. I challenge all of you here to be an instrument of light and wisdom on the BOL)

(Tell all your relatives, friends and the community the positive effects once this is put into law. If there is BOL, the Bangsamoro government can freely decide on its own. Because of this, social services and projects will easily come down)

He said the BOL is a sign of successful peace process and its ratification will lead to the closure of an old episode of conflict.

(The message will be clear to everyone: War has ended and we are all ready to face a more fruitful future)

He said this will also open the doors for the entry of investments that will spur development and progress as well as generate jobs.

The Commission on Elections (Comelec) has set two separate dates--January 21 and February 6, 2019--for the plebiscite on BOL.

Isabela City in Basilan province and Cotabato City will vote on January 21 while Lanao del Norte, the municipalities of Aleosan, Carmen, Kabacan, Midsayap, Pikit and Pigkawayan, and all other areas continuous to the Bangsamoro core was set on February 6.

The ratification of the BOL will lead to the creation of the Bangsamoro, a new political entity that would replace the present Armm. (SunStar Philippines)