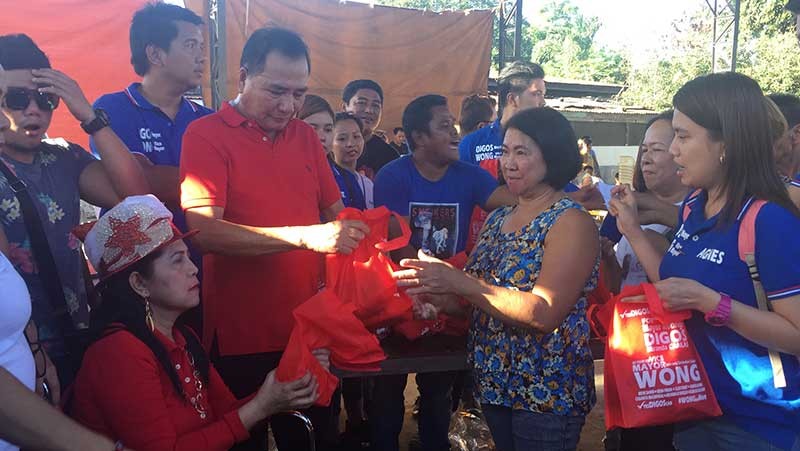 HUNDREDS of senior citizens and persons with disabilities (PWD) from Barangay Sta. Monica, San Simon town on Tuesday, December 18, received their early Christmas gifts from the local government and its partner from private sector.

Wong said the gift giving dubbed as “Pamaskong Handog sa Barangay” is an annual activity hosted by the local government.

The project is aimed to reach out and share the Christmas cheer to Simonian families, especially those in the needy and marginalized sector.

A PWD herself, Wong said that she wishes to uplift the spirit of and extend the warmth of a family to her fellow handicapped by enjoining them as one family this holiday season.

“We went around the 14 barangays of San Simon to share the Christmas cheer to the people. And as a temporary PWD, I know and understand how one feel that’s why I put priority on my fellow PWDs on our early gift-giving,” Wong said.

Wong also said that Barangay Sta. Monica is the last leg of their week-long gift-giving activities for all sectors of society, embodying her administration’s motto “Abe-abe, sawup-sawup. Alang malalakwan.”

Canlas, for his part, said that his family’s annual Christmas gift-giving was special this year as he shared it to his bigger family, the whole San Simon community.

Through the activity, Canlas paid tribute to the elderly who have guided him in his early political years and have supported him until he stepped down nine years ago.

“I wanted to show my deepest respect to the elderly, not only because of their seniority but as a thanksgiving for the unending support they have shown me all throughout,” he said.

Canlas added that the warm welcome he received from the 14 barangays was like an early Christmas gift to him and his family.

“Christmas is the season of giving, and we wanted to embody the spirit by sharing our blessings to fellow Simonians. It feels very good to share, but it’s even better when you see the smiles on the people’s faces as they receive our little gifts,” he said.