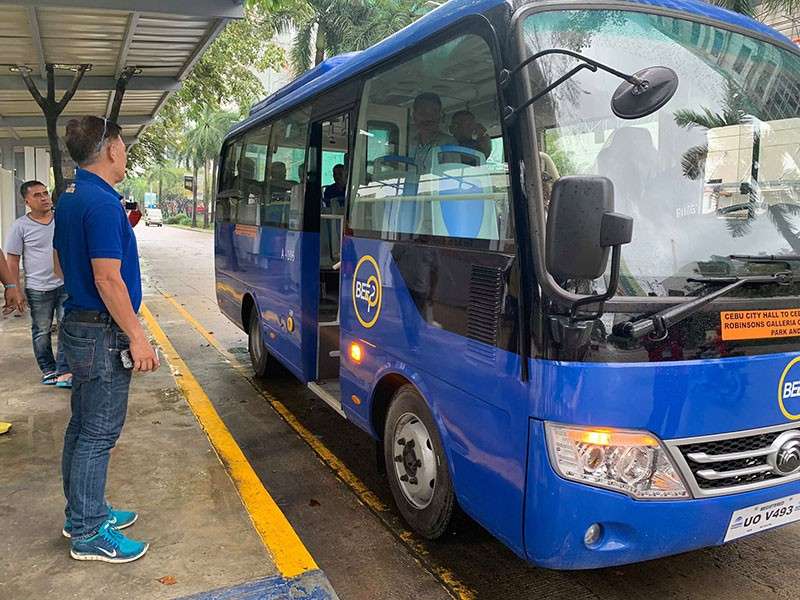 THE FUTURE OF CEBU’S MASS TRANSPORT. The blue beep, like its white counterpart, is air-conditioned and is connected to the internet. It can carry 34 passengers, including the driver, unlike the white beep, which can only carry 32 persons, including 23 seats for passengers and the driver. (SunStar photo / Herty Lopez)

THE 40 modern bus-jeeps (beeps) are comfortable, air-conditioned and connected to the internet.

The vehicles, bigger than the regular public utility jeepneys, will start ferrying passengers in Cebu City at 9 a.m. Friday, Dec. 21. They will operate for 24 hours.

For a minimum fare of P8 for the first five kilometers and an additional P1.50 for each succeeding kilometer, passengers can ride the beep from the City Hall or from the Paseo Arcenas Banawa in Barangay Guadalupe.

Persano Corp., the beep operator, held a trial run on Thursday, Dec. 20, to acquaint drivers with the loading and unloading points.

The City Government, he said, will construct waiting sheds to protect passengers from the elements.

The beeps’ primary route, which is from the City Hall to the Cebu I.T. Park, has nine stops. Drop-off and pick-up points will be beside Plaza Sugbo (P. Burgos St.), S. Osmeña Ave. near Pier 1, V. Sotto St., and along Robinsons Galleria Cebu, among other stops.

The beeps’ secondary route starts on Duterte St. in Banawa, Barangay Guadalupe and ends in Sykes in Barangay Mabolo with nine designated loading and unloading areas.

Warren Flores, Persano Corp. operations manager, said they will strictly follow loading and unloading points because they do not want to cause traffic.

As of now, they only accept cash or coins for fare because Persano has yet to sell the reloadable beep cards at designated outlets in malls. A commuter can also buy the card from a passenger assistance officer, who collects fare.

“Perhaps it’s because of the bad weather that there were only fewer vehicles despite the Christmas season just around the corner, but the beep units did not add any load to our traffic flow. Their trial run went smoothly,” he said.

Although the operator intends to field only 20 units each for every route, Ouano hopes this will discourage vehicle owners from taking their private vehicles and instead encourage them to travel via beep to their destinations.

“This will result in less traffic, less pollution, less expenses. People who don’t want to drive because of the traffic now have an alternative. The operation of jeepneys will also not be affected by the beeps because these have different routes,” Ouano said in Cebuano.

Ouano said his office will monitor and assess the operation of beeps for the next 44 days before submitting their recommendation to Persano. (FROM HBL OF SUPERBALITA CEBU, KIZIAH MARIE T. SUELLO, USJ-R INTERN, KAL & RTF)