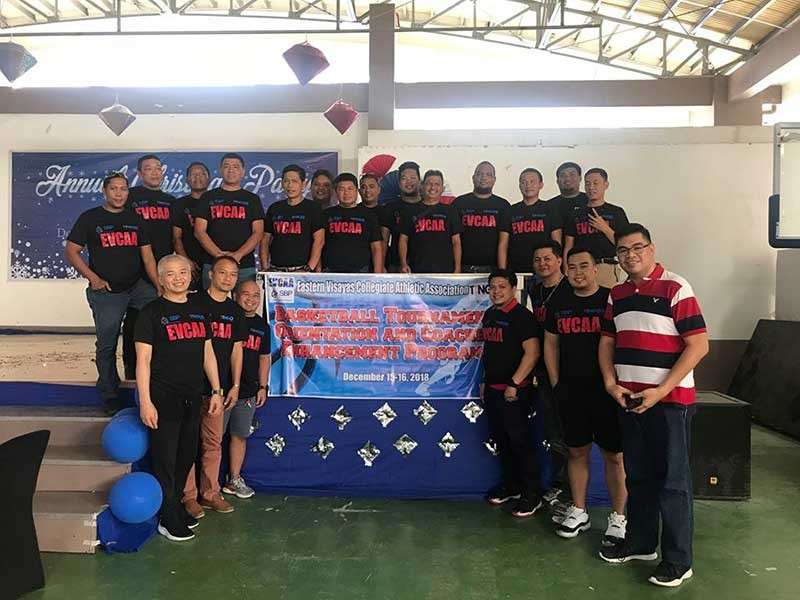 THE Eastern Visayas Collegiate Athletic Association (Evcaa) will open the first season of its basketball tournament in January 2019.

It will be participated by student-athletes from the different state universities and colleges (SUCs) in the region.

“Evcaa, being the premier Collegiate Athletic Association in the region, will conduct yearly sports tournaments as well as capacity building of in-house coaches. And it will start with basketball tournament on January 26, 2019,” said Julius Ross Lacaba, the tournament commissioner.

Patterned around the concept and structure of the two of the country’s premier collegiate athletic associations– the University Athletic Association of the Philippines and the National Collegiate Athletics Association, Evcaa’s first basketball tournament will be supported by the Samahang Basketbol ng Pilipinas, the basketball governing body authorized by the country and sanctioned by the International Basketball Federation.

“This will bring a big impact to the region in terms of youth development in sports, following the government’s program on sports development at the grassroots level. This is an avenue for our student-athletes to play. We have plenty of athletes in our universities, but we lack leagues,” Lacaba said.

“We have invited all the 10 SUCs in Eastern Visayas to participate, and most have expressed willingness to join,” he added.

“Scuaa and Prisaa leagues will only last for one week, and after that, our athletes would feel stuck. While Evcaa’s basketball tournament season will last for one semester. It will be played during Saturdays and Sundays,” Lacaba said.

Evcaa will develop sports in a “holistic manner” by also giving a capacity building to coaches and referees to improve the quality of their work, Lacaba said.

Lacaba added that they will also have separate plans for the players who are out of schools and in the private institutions.

The tournament will be live-streamed in social media and broadcasted live on a local television channel.

Acidre believed that since students “have a lot to offer,” they are creating opportunities for them to “showcase and further develop their talents.”

On December 15 to 16, Evcaa held a basketball orientation and coaches enhancement program for the upcoming tournament.

“Our vision is for the Eastern Visayas to rise in basketball. This will be another pool where we can get players for Philippine Basketball Association and national teams,” he added.

Jude Duarte, the president of Leyte Normal University in Tacloban City, said he is very supportive of the basketball sports in the region.

“We’ve proven a lot in terms of academics. We want to place a balance between academics, culture and arts, and sports. We’ve proven ourselves to be good in swimming and women’s volleyball, but we’ve yet to prove ourselves in men’s basketball,” added Duarte.

Duarte also lauded the creation of Evcaa and the upcoming basketball tournament, saying that “we have a lot to cope up” in terms of the development of basketball players in the region.

“I noticed that players in the region are doing great in Cebu and Manila. As early as high school, we have players in Cebu and in Adamson (University) in Manila. To me it is very alarming,” the university president told PRTV 12 Tacloban.

“Meaning, there is not much tournaments here. So potential players rather choose to go to Manila and Cebu. We might as well take action and come up with tournaments here in Eastern Visayas to level up the performances of basketball among all our basketball enthusiasts,” he added.

“It is better that our players will see that there are basketball tournaments here in Eastern Visayas and they will be inspired to practice more and to cope up with the players of the National Capital Region,” Duarte said.

“They’re very good in Manila and we lag behind,” he said.

While he appreciated Evcaa’s mission, Duarte also believed that “lots of university presidents are supportive of this group.”