‘Night at the Museum’ scenes for Iloilo City folks this season 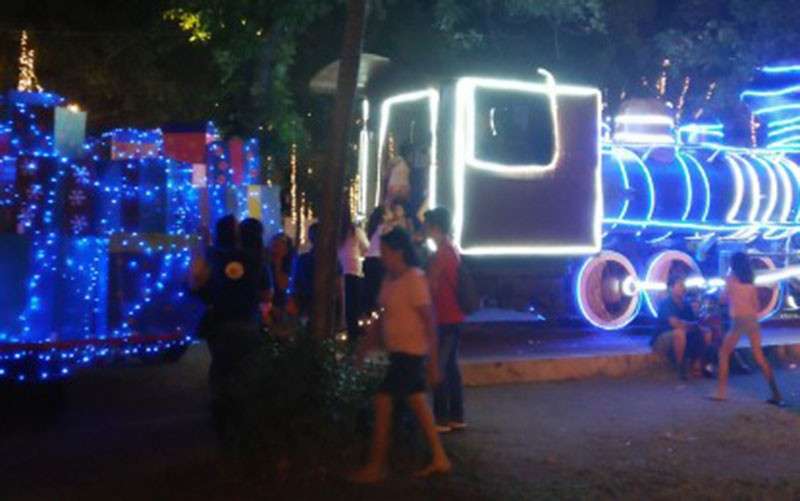 ILOILO. The remaining parts of the Steam Locomotive 888 adorned with colorful lights amaze children who visit Plaza Libertad during night time. The plaza's Christmas design will be in place until the celebration of the “Dinagyang Festival” highlights on January 25 to 27 next year. (Photo by Perla Lena)

THE historic Plaza Libertad in Iloilo City, at first glance in the morning, looks just like any ordinary plaza with the statue of national Jose P. Rizal standing tall at the center.

But this Yuletide season, when the clock strikes 5 p.m., the 1.5-hectare plaza transforms into a magical place full of sparkling Christmas lights and several animal figures reminiscent of the American comedy film “Night at the Museum.”

“This is the first time that we have introduced a theme and we chose the movie ‘Night at the Museum’,” Mayor Jose Espinosa, who thought of the concept, said Monday, December 24. The plaza’s transformation was first unveiled on December 10 and will continue to illuminate the night until the celebration of the “Dinagyang Festival” highlights on January 25 to 27 next year.

In the movie, animals and other figures of famous people on display come to life in the evening, the mayor added.

Hundreds of Christmas lights breathe life into different animal figures of elephants, monkeys, tigers and even dinosaurs. He said that it is meant to send a strong message, especially to children, about showing concern for the wildlife.

“This will be frequented by our young. We want to raise their awareness to show concern to our animals that are almost extinct,” he said.

“So, while they take photos, they should also be reminded of animals that are now on the verge of extinction,” Espinosa added.

Aside from the animals, visitors at the plaza, will be definitely unable to ignore the imposing 25-feet Christmas tree fronting the seven-story eye-catching city hall. At the rightmost part of the plaza, the idle remnant of the Steam Locomotive 888 train that used to transport sugar canes when the sugar industry was then one of the major industries in the region becomes magical with the shimmering Christmas lights while big boxes of colorfully wrapped gifts can be seen placed in front of the train.

The City Engineer’s Office (CEO) also showcased in its design that celebrating Christmas need not be expensive.

The CEO and the General Services Office (GSO) collaborated to gather as many recyclable materials to be used for the Christmas tableau at the plaza.

“GSO provided for free, from garbage pickers, around 20 sacks of recyclable plastic materials,” said CEO head, Engr. Bobby Divinagracia. The CEO also made use of empty drums painted with Christmas symbols, as place for the children to play hide and seek or simply just take photos and selfies.

“We want this to be interactive where children can play,” he said.

With a budget of P1.5 million, the plaza has become a place for family to gather and to bond, especially during nighttime.

“The plaza is where the people gather, it is where family gather, that is why it is always at the center of the community. This is part of my promise that the plaza should be open to all,” Espinosa said.

The mayor urged the public to “enjoy this Christmas season at the beautifully lighted plaza” while listening to the pipe-in Christmas songs playing 24 hours within the area.

The concept was first introduced at the Plaza Libertad but the city government is looking forward to also provide attractions in other plazas of the city. Each of the seven administrative districts of the city has a plaza.

“We want to make playground in all our plazas to add color to the Christmas celebration of our children,” the mayor said. (PNA)