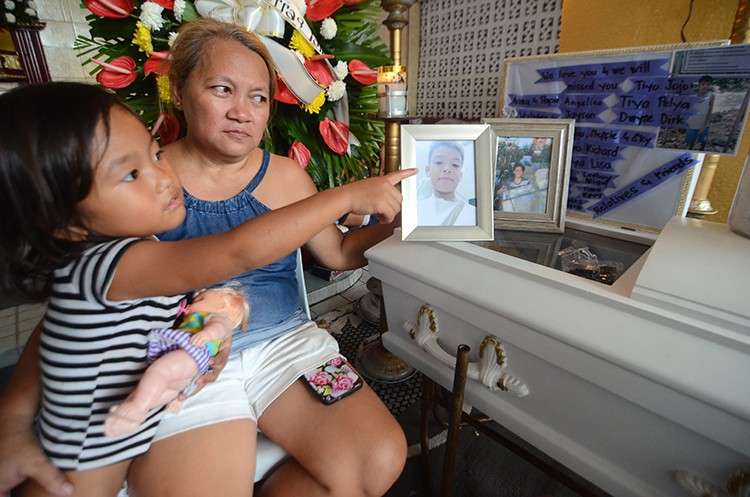 At the wake of Cyrus John Ferras, 12, are his mother, Teresa, and his niece Steffie Georgette, 4. (SunStar Foto / Alan Tangcawan)

CYRUS John Ferras, 12, was no longer able to enjoy his Christmas presents. He also will not be able to pursue his dream of becoming a seaman.

The charred body of the Grade 7 pupil was found in what remained of an internet café in Barangay Duljo Fatima, a densely populated village in Cebu City that was hit by a fire at dawn on Christmas Day.

Ferras was the only fatality in the fire that gutted some 440 houses in six sitios—Mansanitas, Buli, Catwalk, San Pedro, Plastican, and Pasong Kabayo. At least 2,574 persons were left homeless.

According to his mother, Teresa, 47, Cyrus was sleeping inside a nearby internet cafe when the fire struck.

“He was found under the stairs in the internet café. He chose to sleep there the night before the fire because it was air-conditioned. He often keeps watch of the place so he can use the internet for free to play DOTA,” she said in Cebuano.

Residents reportedly tried to wake him up, but the boy went back to sleep.

“This is very painful for us... He was carrying a Christmas present before he went out. I didn’t see him after that. I couldn’t find him because I had my grandchild with me when people started running when the fire started,” she added.

His eldest sister, Angelika, 24, said that hours before the incident, one of their uncles told him not to sleep early because it was Christmas Eve.

“He usually sleeps late, but that night, he slept very early because he said he was tired, even after our uncle told him not to sleep early because it’s Christmas Eve,” she said.

Cyrus, an honor student, was the youngest of the four children of a housewife and a carpenter.

Just like other children his age, he also loved to play basketball and computer games. He had his own share of mischief, but he was always a sweet and responsible son, according to his mother.

“He used to hug me all the time. He was very sweet even with his uncles and aunts. I always reminded him to study hard so he would succeed as a marine engineer,” she said.

Angelika recalled how her brother used to help her take care of her children and obliged whenever she asked him to give her children a bath. Cyrus just got back home in Duljo from his sister’s house in Barangay Basak Pardo two days before the fire.

“Even if he was mischievous at times, he was very dependable. He would not talk back whenever I scolded him. Had I known this would happen, I would not have let him go home to Duljo. He could have just slept in my house,” she recalled.

Teresa said that if only they could afford it, a Forensic Deoxyribonucleic Acid (DNA) test would confirm if the body was Cyrus’s. But knowing that there are no other families looking for a missing person is enough to confirm that it’s him.

“Cy, go with our love and prayers. It will be difficult to accept that you’re gone because this is so sudden,” Angelika said.

His remains lie in state at the San Vicente Chapel beside the barangay gymnasium, which serves as the temporary relocation area for the fire survivors.

His burial is scheduled on Dec. 31, Monday, at the Calamba Cemetery.

Councilor Dave Tumulak said he plans to author an ordinance that will regulate the hours that minors spend inside internet shops following the death of Ferras.

Tumulak, who chairs the public order and safety committee, said minors should stay at internet cafes only until 10 p.m.

“How come the minor was still there even after midnight and the owner should have checked it. This is the reason why we have to regulate,” he said. 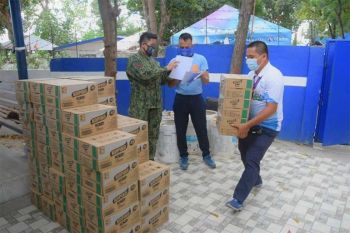 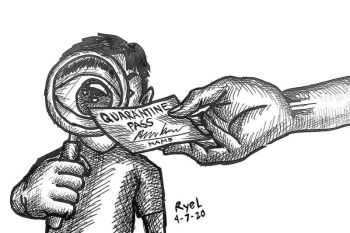