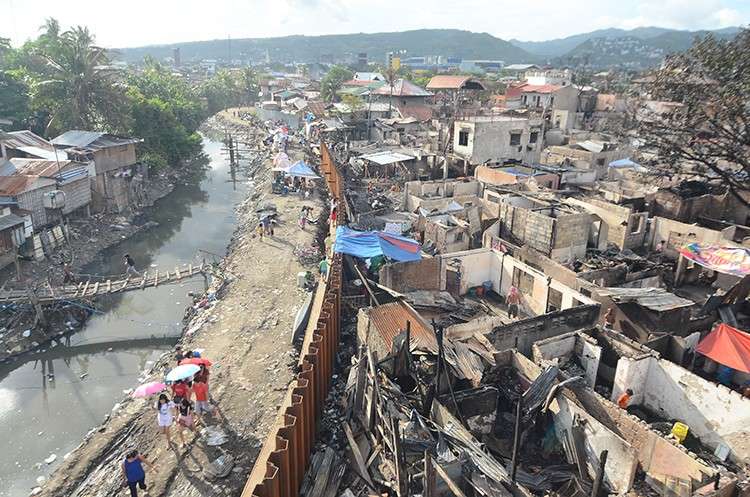 Sitting Ducks. Even concrete houses didn’t stand a chance against a fire that raced unimpeded through four sitios in Barangay Duljo-Fatima, Cebu City on Christmas Day. The narrow to non-existent spaces between houses meant firefighters could not get close enough to stop the fire from spreading. (SunStar Foto / Alan Tangcawan)

AN argument between a couple that prompted the wife to burn the motorcycle of her husband might have caused the biggest fire that hit Cebu City this year, particularly in four sitios of Barangay Duljo-Fatima on Christmas dawn.

It took almost three hours for firefighters to control the fire due to the narrow pathways in the area, prompting the City Government to have the place re-blocked before the affected residents will be allowed to go back to their houses.

Records from the Department of Social Welfare and Services (DSWS) showed that the fire burned 444 houses, affecting 593 families or 2,574 individuals, making it the biggest fire to hit Cebu this year.

The fire also claimed the life of 12-year-old Cyrus John Perras who was trapped inside an internet cafe.

With this, the City Government is asking the public to help the fire survivors by donating used clothing, water and ready-to-eat food.

City Fire Marshal Chief Insp. Noel Nelson Ababon said they already invited witnesses to get their testimonies on what might have caused the fire.

Cebu City Disaster Risk Reduction Management Office (CCDRRMO) Chief Nagiel Bañacia said that when he visited the fire scene Wednesday, Dec. 26, residents told them about the couple who had an argument prior to the fire.

“One of them burned the motorcycle and when they tried to extinguish it, it was already too late,” he said.

The City Fire Department is already validating the report.

The City Fire Department received the fire alarm at 3:47 a.m. which was raised to task force alpha at 4:11 a.m.

Firefighters were able to control the fire at 6:26 a.m.

Estimated damage of the fire was around P3 million.

Councilor Dave Tumulak said that they will recommend to Mayor Tomas Osmeña the reblocking of the fire site.

“When I went to the scene during the fire, I noticed that the fire trucks had a hard time accessing the area due to lack of access. Aside from it, private cars are also parked on the side of the road,” he said.

Division of the Welfare of the Urban Poor Operations Chief Genevieve Alcoseba said they will implement reblocking in the area to provide access.

Within the week, Tumulak said the City will implement clearing in the fire scene to prepare it for reblocking.

Tumulak said those who want to help the residents may drop their donations directly at the evacuation centers or at the barangay hall.

Meanwhile, the Visayan Electric Co. wants fire survivors whose houses are still intact but have no electricity to visit any of its service centers if they want their power back the soonest.

“As much as we would like to bring back power to the area right away, there are processes in place that residents must comply with,” a Veco statement said.

Their service centers are in One Pavilion Mall in Banawa and the South Extension Office in Tabunok, Talisay.

Residents should bring a billing document and a picture of their house.

Those whose houses were partially affected should secure a report from the Bureau of Fire Protection and submit it to the service center.

“This BFP report will serve as energization clearance for those partially burned houses, as well as basis for updating the accounts of customers with fully burned houses,” said Veco. RVC / From HBL of Superbalita Cebu