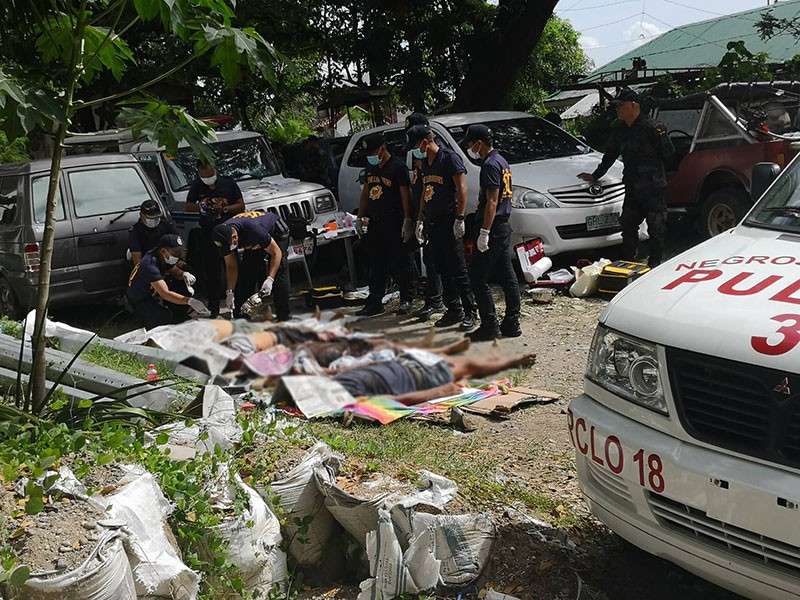 NEGROS. The five individuals who were killed in Guihulngan City, Negros Oriental for allegedly fighting back with the police during the simultaneous operations in their residence on Thursday, December 27. (Contributed photo)

SIX persons were killed while 31 persons were arrested during the simultaneous police operations in Negros Oriental on Thursday, December 27.

Five of them were operated for illegal possession of firearms while the other one was a wanted person.

Senior Superintendent Raul Tacaca, director of Negros Oriental Police Provincial Office, said they conducted the synchronized enhancement managing police operations since 12 a.m. upon the order of the Police Regional Office- Central Visayas in coordination with the Armed Forces of the Philippines, Special Action Force, and other law enforcement agencies against lawless elements and criminals in the region.

Tacaca said 15 men and three women including a village chief were arrested in Guihulngan City, mostly due to illegal possession of firearms and ammunition.

A male councilor in the city voluntarily surrendered to the police, he added.

In Mabinay town, five persons were arrested for loose firearms after their homes were raided by the police through search warrants.

In Dumaguete City, two persons allegedly yielded about 350 grams of suspected shabu (methamphetamine hydrochloride) worth P2 million, and three others were collared for their arrest warrants.

In Sta. Catalina town, two persons were arrested for violation of Republic Act 10591 or Comprehensive Firearms and Ammunition Regulation Act. One was killed during the operation.

In La Libertad town, one was arrested for loose firearms.

Tacaca said the operations were mainly on the implementation of search warrants against loose firearms following the indiscriminate firing incidents in the province, adding that some of the suspects were linked to killings and other criminal cases.

They also arrested persons who were reportedly engaging in the illegal drug trade, he added.

Tacaca said it was unfortunate that there were fatalities but considering that they were armed and dangerous, police also defended themselves against these suspects.

When asked if some of the houses were allegedly ransacked, Tacaca said their operations have a basis and they did not commit violations.

The Apolinario Gatmaitan Command of the New People’s Army (NPA) said on December 27 that the death of six persons in the police operations violated the rights of the civilians.

“We just did what we have to do. We followed the process in the implementation of search warrants and service of arrest warrants, but they resisted arrest,” Tacaca said.

“Trabaho lang ito (this is just work),” he added.

Tacaca said the Sempo will continue on Friday, December 28 in the region.

Meanwhile, more police and military troops were deployed in Guihulngan City on Thursday while the police operations continue.

Guihulngan City is considered by authorities as an infested area of the rebels.

Recently, a newly-assigned policeman was gunned down by unidentified assailants on a motorcycle in the city.

In 2017, five policemen, including former Guihulngan City police chief Superintendent Arnel Arpon were killed in an encounter with the rebels when they responded to a call for assistance from Councilor Edison de la Rita, who was also killed by the same perpetrators in Barangay Poblacion on April 2, 2018.

Two months ago, a member of the Regional Mobile Force Batallion was wounded after some 30 unidentified armed men believed to be members of the NPA opened fire at two detachment camps in Guihulngan City, including the newly-inaugurated Camp Superintendent Arnel D. Arpon in Barangay Bulado.