Police destroy P1M worth of firecrackers 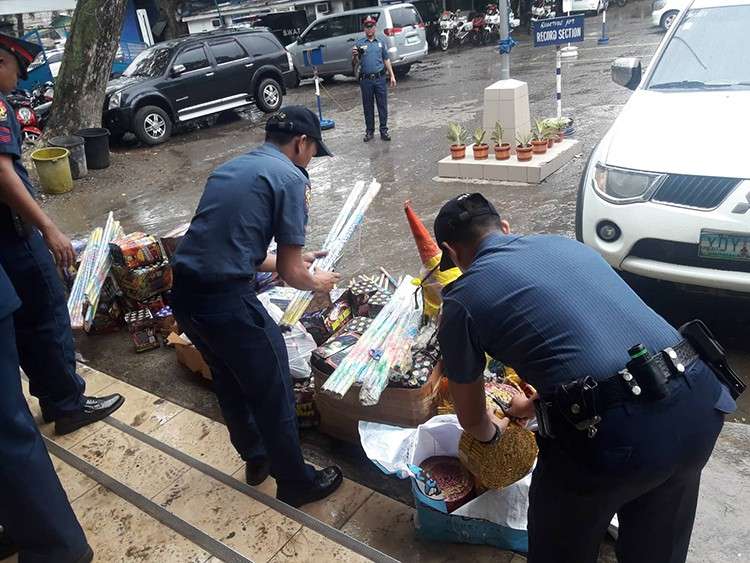 Not so lit. Operatives from the Cebu City Police Office douse close to P1 million worth of firecrackers with water so they could no longer be sold. Those were not among the firecrackers allowed to be sold in the Philippines. (SunStar Foto / Arnold Y. Bustamante)

THE police in the cities of Lapu-Lapu and Cebu destroyed nearly a million pesos worth of banned firecrackers and imported pyrotechnics on Friday morning, Dec. 28.

The personnel of the Mambaling Police Station confiscated the banned firecrackers from designated display zones in the South Road Properties before Dec. 25.

Garma said her personnel noticed that the vendors were selling imported firecrackers during the inspection. The government, she said, only allows the sale of firecrackers that were manufactured in the country.

Seized from the vendors were 276 banned firecrackers including diamond fantasy wand, pegasus, fountain and bawang.

Garma said that while they confiscated the items, they only warned the erring vendors. If they are caught for the second time, the police will file charges against them.

Dilag said the vendors can obtain permits but the inspectors have the right to confiscate if the firecrackers do not fit the standard weight.

He said firecrackers that weigh more than 500 kilos are prohibited.

Lapu-Lapu City Police Office Director Lemuel Obon led the ceremonial destruction of the products seized outside the designated display areas in the villages of Babag, Canjulao and Kalawisan.

The other firecrackers that were destroyed were also oversized and imported.

“They are not illegal per se. They are authorized by law, allowed by law. However, when those are sold in places not considered as firecracker zones or areas, we will seize them because they are violating our safety nets,” Obon said.