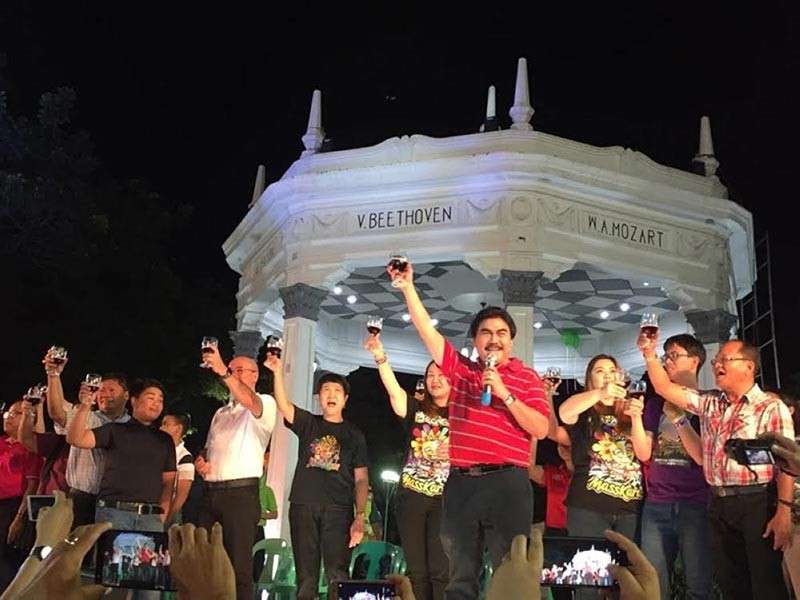 BACOLOD. Bacolod City officials led by Mayor Evelio Leonardia at the opening of 39th MassKara Festival at the public plaza as part of the city’s 80th year celebration. (Merlinda Pedrosa) 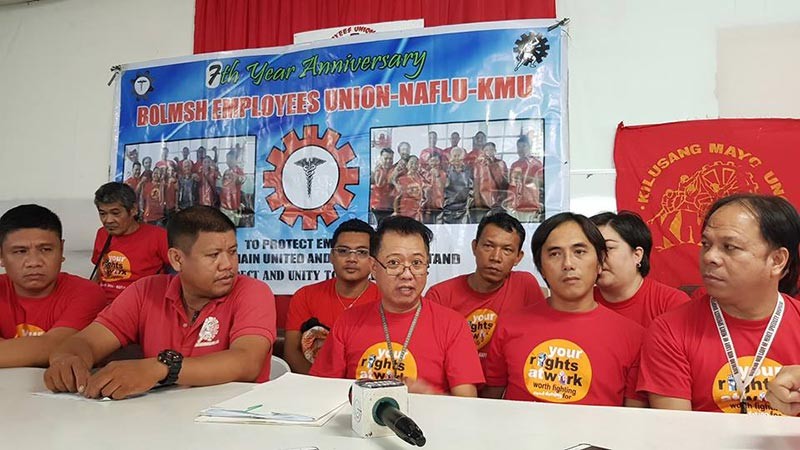 BACOLOD. Workers of the Bacolod Our Lady of Mercy Specialty Hospital ask the Philippine Health Insurance Corporation to reconsider the accreditation of the hospital. (Teresa Ellera) 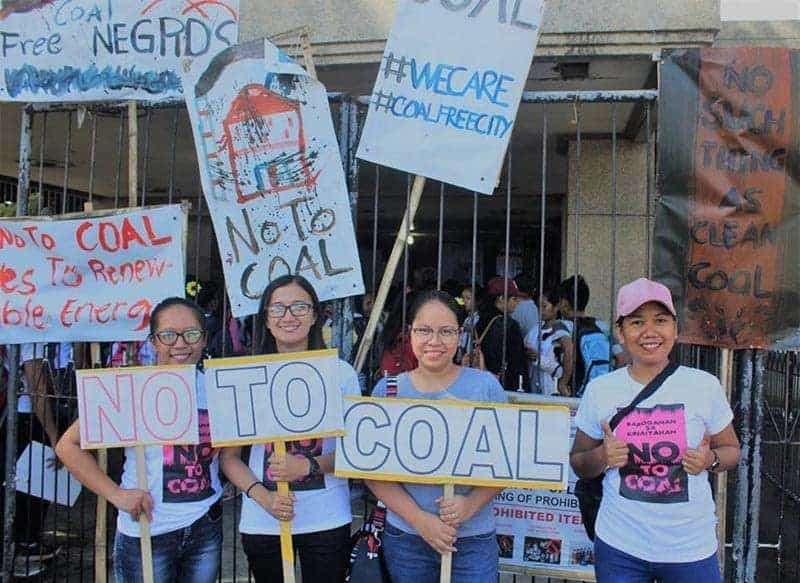 NEGROS. Some of the youth-participants of the caravan with “No to Coal” placards, signifying their support to the church’s call for a clean environment in San Carlos City on November 30. (Contributed photo) 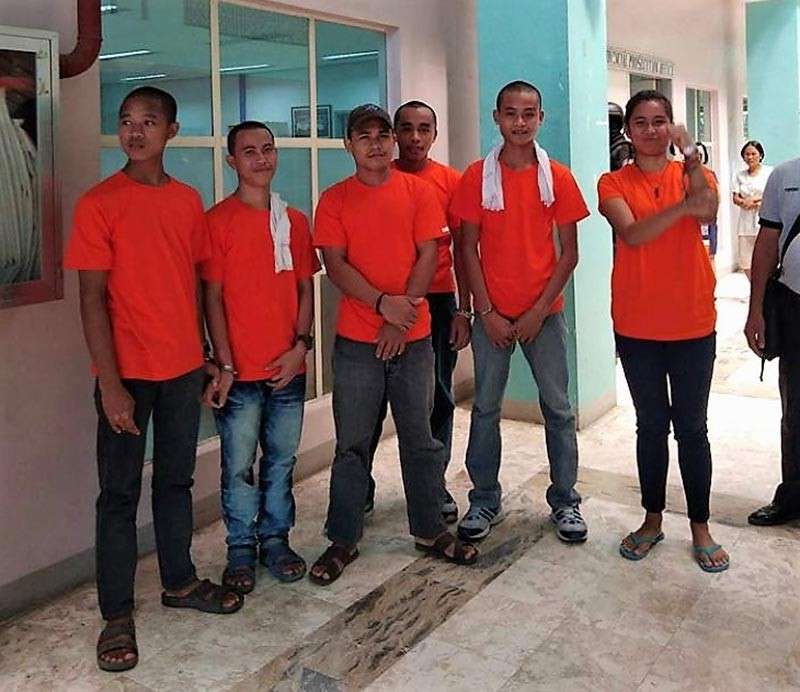 NEGROS. The youth activists dubbed as “Mabinay 6” were tagged as members of the New People’s Army by the state forces. (Contributed photo)

BACOLOD. Bacolod City officials led by Mayor Evelio Leonardia at the opening of 39th MassKara Festival at the public plaza as part of the city’s 80th year celebration. (Merlinda Pedrosa)

One of the meaningful events in 2018 was the celebration of the 80th anniversary of Bacolod City, with the theme “Bacolod@80: Full Speed Ahead to the next 80 Years.”

A series of activities- specifically for the arts, culture, heritage, business trade and investments - were held from January to December.

Mayor Evelio Leonardia said Bacolod is one of the premier highly-urbanized cities in the Philippines right now, adding that Negros Occidental’s capital city is a recipient of many awards and recognition, as it was a top performer in the areas of economic dynamism, tourism festival, business process outsourcing operation, and resiliency.

Bacolod was also cited as business-friendly, child-friendly, and best city to live in.

“The incumbent local officials of Bacolod believe that Bacoleños should be inspired to recall, reminisce and remember the city where they were born and raised in order they will feel proud of being a Bacoleño and then commit to participate and contribute actively in the noble task of accelerating the sustained and economic growth of their beloved city,” the mayor said.

“There is no stopping of the dream to make Bacolod a premier city of the country, eventually an Asean City, and finally as a City of the World. This is where our radar is aimed at. On our 80th year, we move towards this dream with an amazing speed so that in another 80 years, we see Bacolod to be the best that she could be, notwithstanding political nitpickers, global competition, and waves of technological and ideological warfare,” Leonardia added.

BACOLOD. Workers of the Bacolod Our Lady of Mercy Specialty Hospital ask the Philippine Health Insurance Corporation to reconsider the accreditation of the hospital. (Teresa Ellera)

The closure of Bacolod Our Lady of Mercy Specialty Hospital (BOLMSH) has affected the health care services in the city and the province.

A total of 401 hospital workers lost their jobs while 213 dialysis patients were displaced, as well as hundreds of patients.

The hospital which was run and managed by private physicians in Bacolod City decided to close down the hospital after the Philippine Health Insurance Corporation (PhilHealth) suspended their accreditation since March this year.

Despite the efforts of the Bacolod City officials and the appeal of dialysis patients and hospital employees who are members of the BOLMSH Employees Union the hospital was closed end of July.

PhilHealth had earlier said the closure of BOLMSH is a decision that was made by its own management and not by PhilHealth or the government.

“It can continue to exist and operate to serve its local constituencies and for the welfare of its employees if it wants to, even without its accreditation with PhilHealth,” it said.

NEGROS. Some of the youth-participants of the caravan with “No to Coal” placards, signifying their support to the church’s call for a clean environment in San Carlos City on November 30. (Contributed photo)

Negros Occidental was not spared by some issues including those of social, economic, and environmental relevance.

At the latter part of the year, a strong opposition on the coal-fired power plant in the province ignited.

On November 22, four bishops of the dioceses in Negros issued a collegial pastoral statement strongly opposing coal in Negros Occidental.

In the statement, the four church leaders called on the people to stand firm together in Negros- with each other and with civic leaders - to oppose any coal-fired power plants and phase out those still in operation.

In fact, the Diocese of San Carlos led by Bishop Gerardo Alminaza has bannered the battlecry during the culmination of the Year of the Clergy back to back with the launching of the Year of the Youth participated by over 5,000 youth and parishioners.

It was reported earlier that SMC Global Power Corp. will develop a 300-megawatt coal-fired power plant in San Carlos City.

The city council has already concurred the resolutions of the two would-be host barangays, Punaw, and Palampas expressing openness to the project.

Mayor Gerardo Valmayor Jr. said they are still weighing the impacts of the proposed development.

The provincial board, for its part, has yet to act on the proposed ordinance of Governor Alfredo Marañon Jr. making Negros Occidental a coal-free province by disallowing the exploration, establishment, and operation of coal-fired power plant here.

Marañon claimed that many Negrenses would support for a coal-free province.

Vice Governor Eugeño Jose Lacson is open to the idea of having mix energy sourced. He, however, said all possible impacts should also be considered first.

The Department of Tourism in Western Visayas said the proposed project may affect the tourism status of San Carlos as among the top sustainable destinations in the world.

NEGROS. The youth activists dubbed as “Mabinay 6” were tagged as members of the New People’s Army by the state forces. (Contributed photo)

Six suspected members of the New People’s Army (NPA), including a female activist and two minors, were arrested following an encounter with the government troopers in Mabinay town in Negros Oriental on March 3.

Nabbed were Myles Albasin, 21, of Cagayan de Oro; Jomar Indico, 29, and Randel Hermino, 19, both of Himamaylan City in Negros Occidental; and Joey Vailoces, 18, of Mabinay.

They were later dubbed by the media as “Mabinay 6.”

Later, Albasin and her five companions all tested negative for gunpowder residue based on the paraffin tests conducted by Negros Oriental Provincial Crime Laboratory.

Albasin’s mother, a journalist, denied the claims of the military that her daughter is a member of the NPA.

The communist rebels, in a statement, also denied that the six are members of the NPA.

In January, authorities also arrested Isidro "Gesnar" Castillo, 66, a suspected leader of the Communist Party of the Philippines (CPP-NPA) in Bacolod City.

According to the Philippine Army’s 303rd Infantry Brigade, Castillo a member of Regional Urban White Area Committee under the religious sector, and a spokesperson of Negros Farmers Sugarcane Workers in Negros Occidental has an arrest warrant for murder.

In May, an alleged extortion unit leader of NPA was arrested in Ilog, Negros Occidental.

In October, an alleged platoon leader of the NPA was served with two arrest warrants for multiple frustrated murder and murder in his residence in Barangay Camindangan, Sipalay City.

Grande said Herrera claimed he was a former platoon leader of the rebel group but based on the military's intelligence monitoring, he is still a leader.

Herrera was one of the suspects who reportedly attempted to assassinate an army officer, Grande said.

Also arrested on the same month was alleged NPA member Ronald Lahay-Lahay, 32, in his residence in Sipalay City.

He has an arrest warrant for multiple frustrated murder.

Lahay-Lahay was still an active member of the NPA based on the statement of the Philippine Army, who led the apprehension of the suspect.

In December, an active member of the NPA was arrested for two counts of murder and frustrated murder in Barangay General Luna, Sagay City.

Chief Inspector Antonio Benitez Jr., city police chief, said the suspect is involved in the killing of two farmers, and injury of another farmer in the said village in May 2016.

More than two months after the previous Wage Order lapsed in March 26, the Regional Tripartite Wages and Productivity Board (RTWPB)in Western Visayas has approved a new order setting higher minimum wage rates for private sector workers in the region.

Starting July 12 2018, the new minimum wage rates in the region which include the cost of living allowance are P295 and P365 per day depending on workers' classification.

Former RTWPB-Western Visayas chairman Johnson Cañete, though the P41.50 is way beyond the petitioned P130 to P150 "at least it is fair enough for both parties."

But for the labor sector, the wage adjustment is still so far below the mandated living wage and this may not satisfy all the workers in the region.

Wennie Sancho, labor representative to RTWPB-Western Visayas, said the wage adjustment will provide workers with an immediate relief amid the “worsening” economic conditions.

In fact, amid the rising inflation, they are now pushing for the review of the Wage Order even before its one year validity period lapse.

For the business sector, on the other hand, the wage increase is just "reasonable" particularly to those establishments employing more than 10 workers and situated in Metro Bacolod areas including those in cities of Talisay, Silay, and Bago.

Another hike talked about this year was the transport fare among public utility jeepneys (PUJ).

Also in the middle part of the year, the Land Transportation Franchising and Regulatory Board (LTFRB) Western Visayas approved the petition of transportation groups to increase the fare by P2.50, from P6.50 to P9.

It was, however, became a subject of clamor especially among transport groups as the agency failed to immediately issue the new fare matrix.

Thus, it took several months for some PUJ drivers to implement the fare hike.

But, there are reports claiming that some drivers have been imposing the increase despite having no matrix yet.