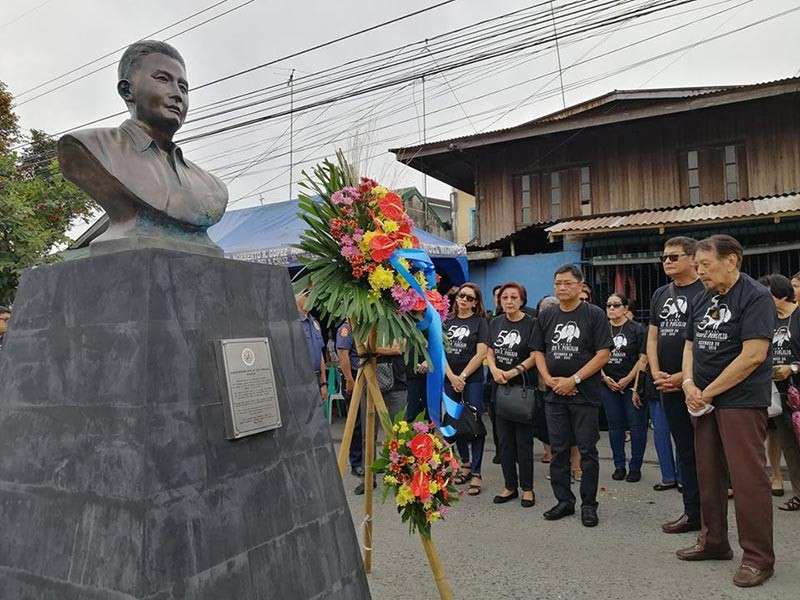 PAMPANGA. City of San Fernando Mayor Edwin Santiago together with the family of Levi Panlilio look at the bust monument and marker as they pray for him silently after they unveiled the monument and marker in Barangay Calulut on Friday, December 28. (Nicole Renee David)

The city unveiled a bust monument and marker, and laid a wreath in honor of the Panlilio in Barangay Calulut.

Mayor Edwin Santiago, together with Theresa Panlilio-Rivera, descendant of Panlilio, signed the certificate of transfer of the marker and bust monument at the San Vicente Ferrer Parish in the said barangay.

Santiago said that the late official has always been remembered as one of the noble Fernandinos as he served Fernandinos during his time with excellence and integrity, and always upholding the welfare of the masses.

Panlilio was elected mayor on November 14, 1967 and was killed by unidentified men on December 28, 1968 in Barangay Calulut, where the bust monument and marker have been placed.

“Panlilio deserves to be called a hero for he stood up as our righteous leader in his time. His sacrifice made a difference here in San Fernando. He will forever be in our hearts,” Santiago said.

Maria Victoria Panlilio-Dimalanta, the youngest daughter of the late mayor, said that her father not only put his family in his heart, but also the city.

“Every person who would hear his story would be inspired, for he alone said yes to public service and no to a private life, yes to the common good and no to personal pay, yes to justice and no to corruption, yes to righteousness, courage and faith and no to bias, cowardice and distrust,” Dimalanta said.

“We all must say yes to whatever is noble, right, true, pure, lovely, and admirable for these are the values that my father applied to the city,” Dimalanta added.

Dimalanta thanked the city government and the City Tourism Office for the tribute.

Also present in the ceremonies were Former Pampanga Governor Eddie “Among Ed” Panlilio and Archbishop Emeritus Paciano Aniceto who celebrated the Eucharistic mass in the parish.