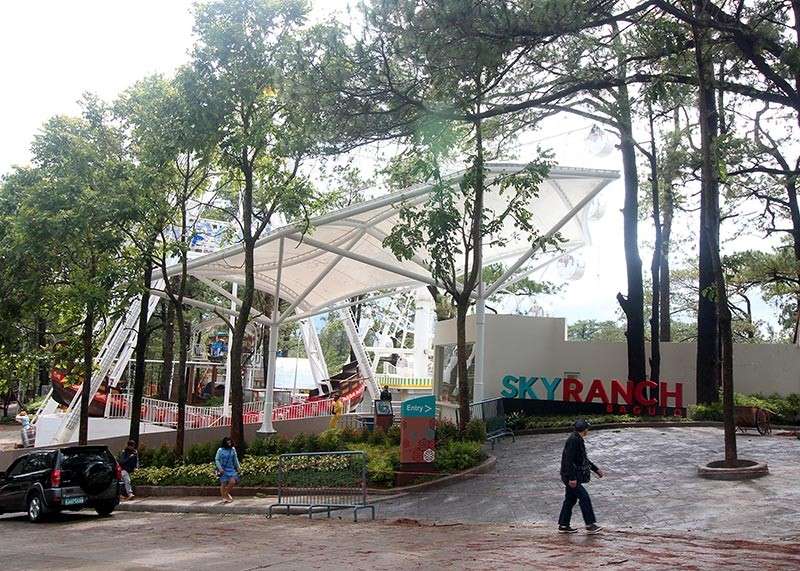 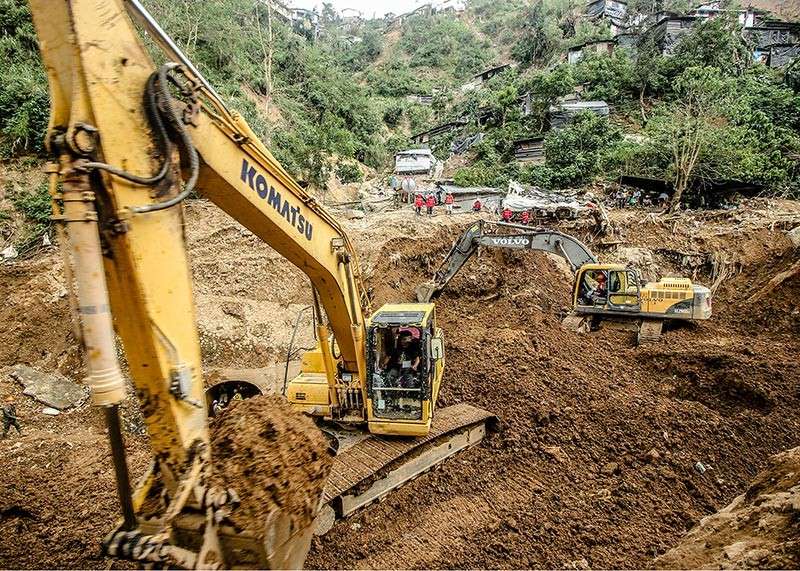 BAGUIO. Backhoes dig deep into the landslide stricken area at level 070 in barangay Ucab, Itogon Benguet in search for bodies. Hundreds of miners and their families were buried alive during the onslaught of super typhoon Ompong in September. (Jean Nicole Cortes) 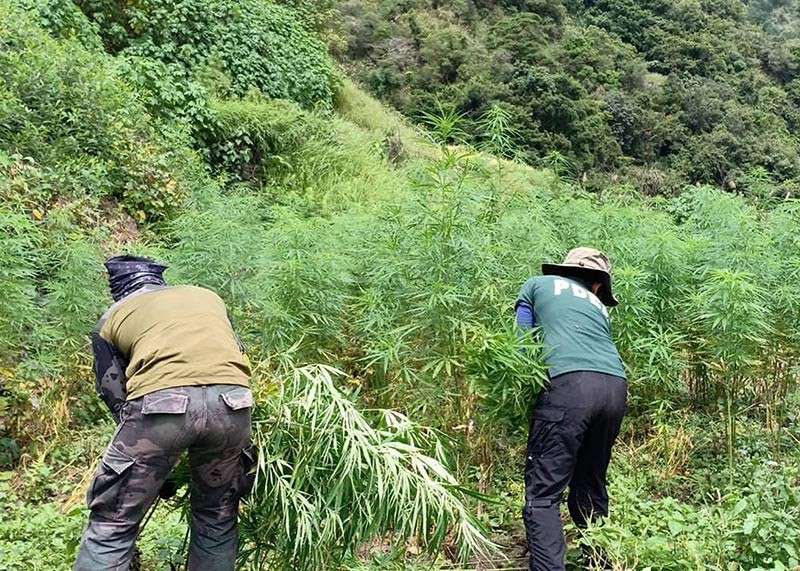 BAGUIO. With the countless eradication being done by authorities in the Cordillera region, Benguet officials are open to legalizing the use of marijuana as an alternative medicine. (Contributed photo) 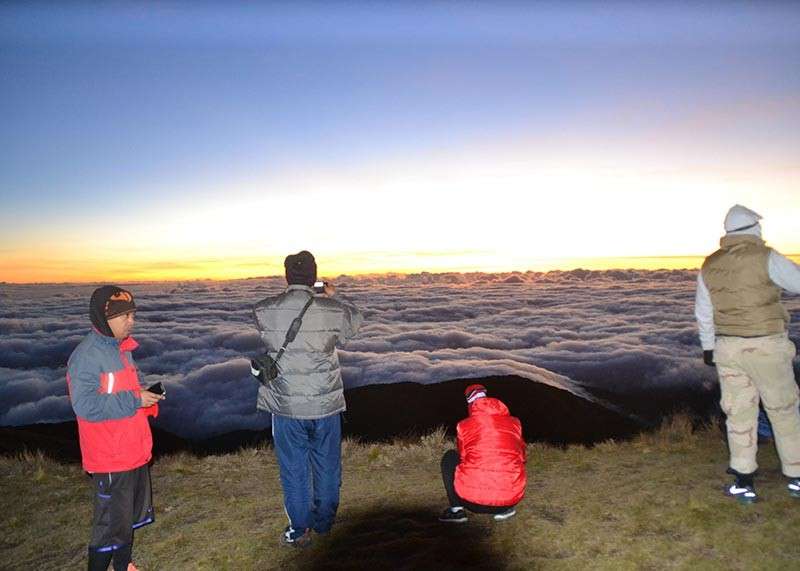 BAGUIO. Trekkers enjoy the breathtaking sunrise over a sea of clouds at Mount Pulag, the highest mountain in Luzon with an elevation of 2,926 meters above sea level (masl) and third in the Phillippines. Mount Pulag was proclaimed a National Park in 1987 through Presidential Proclamation No. 75. It is part of the Cordillera Biogeographic Zone and a National Integrated Areas Programme (NIPAP) site. (SunStar Baguio File Photo)

A RESILIENT Benguet showed the world how to survive.

The year was marked with loss, triumph, and challenges not only for Benguet but the entire Cordillera region.

Nature’s wrath brought a mining town to knees with the collapse of a mountain which buried alive close to a hundred small scale miners, ending the year with prayers and rituals with a renewed hope for 2019 to bring better days.

The deaths brought into question legality and safety of operations in the entire region, pushing the environment department to impose a temporary ban on all small scale mining operations until guidelines have been set.

As the year closed, the Department of Environment and National Resources gave a clearance to the first Minahang Bayan application by the Loacan Itogon Pocket Miners Association (Lipma) backed by the declaration of the Benguet Provincial Mining Regulatory Board [PMRB], the board have also gave miners time to process their gold ores until the end of the year.

Fire hits Playground of the Gods

The year opened with a fire gutting a camp site at Mount Pulag National Park when hikers from Cebu left unattended a portable stove.

The Provincial Environment and Natural Resources Office (Penro) evaluated 5.9 hectare of burned areas resulting to the three-month closure of the Akiki-Tawangan trail of the park.

Hikers led by Raymon Kristomar Mackay were slapped with violations of the Forestry Code of the Philippines with forest charges totaling P2,360,000 were demanded.

The world became witness to the tragedy of the mining town of Itogon in Benguet.

Typhoon Ompong caused a 184.4-hectare landslide to hit level 070 in barangay Ucab burying over 60 miners and resulting to a total death toll of 90 in Itogon town alone.

The Department of Agriculture in Cordillera recorded P4.108 billion damages with 168,221 affected farmers.

Help poured in from the National Housing Authority giving a total of P20 million for the acquisition of lots and materials for construction of new homes and the United States America government delivering P37.3 million (US$700,000) of assistance for Ompong victims.

Benguet truckers continue to call for the lifting of the Baguio City truck ban.

League of Associations at La Trinidad Vegetable Trading Post Area asked the local government of Baguio to lift the truck ban for a seamless delivery of produce.

The request was denied but was granted an exemption for truckers to ply the central business district.

A cease and desist order was given by courts for the 13-year housing development project in Kesbeng, La Trinidad.

The order halted CDJ Group from undertaking any site development, earth-moving, and building and excavation activities at the 9.1 hectare project.

As CDJ seeks to continue operation from the previous developer, Cordillera Homes Saint Francis Community Association Inc., has asked Mayor Romeo Salda to lift the halt order as it has installed mitigating measures.

Inflation rates of all provinces in the region on October this year surpassed the previous inflation rates with the Kalinga province recording the highest inflation at 8.8 percent.

Philippine Statistics Authority in the Cordillera added an increase in prices of goods and services with 5.2 percent this year compared to the same period last year with 1.9 percent.

Among other commodities, alcoholic beverages and tobacco had the highest inflation rate increase.

In this year’s State of Provincial Address, Governor Cresencio Pacalso stood his ground to supply marijuana for medical purposes.

Pacalso is banking on the approval of a House Bill approving the use of the narcotic for medicinal use and offered the province as a top supplier citing the town of Kibungan as one of the areas for the plantation of marijuana as medical weed.

A MOUNTAIN city sits in fear of closure as it grapples to set into place waste management, environment, traffic, tourism and a synergy with its neighbors in the La Trinidad, Itogon, Sablan, Tublay and Tuba areas.

Baguio City has ceased to exist for itself but has morphed into many roles as it has become an educational hub for learners, a creative city for artists, artisans and craftsmen, a tourist and recreation city for the county and the world and a jump off point for the entire region leading visitors to the beauty of the Cordillera.

Problems on congestion, garbage, water and air quality with the rise of high rise buildings are the biggest hurdles the city is facing today.

Itogon town, in Benguet has opposed to being the site for the proposed sanitary landfill. The City Government will have to find other sites as an option to Itogon’s refusal.

Amusement parks have also mushroomed to the disdain of some residents resulting to the birth of several advocacy groups bent to police conservation and preservation of open spaces.

The opening of the SM City Baguio Skyranch amusement park has sparked opposition from the universities surrounding the area, complaining of noise the park generates, impeding learning of students.

Interestingly, the City Council in its last meeting of the year, approved anew the carnival of Belezar Ola at the Children’s Park grounds at Burnham Park.

The city has identified landfill site at the private property of Benguet Corporation at Antamok, Itogon, Benguet with a deed of usufruct was already executed in April, welcoming Waste to Energy (WTE) proposals but has been faced with opposition by the Itogon local government which refuses to give consent to use the property in the municipality.

There is an average of 36,566 vehicles plying the streets of city daily with registered vehicles pegged at 44,809.

Aside from these, there are also an additional vehicles coming to Baguio City via Ambuklao Road estimated to reach 109,350 while vehicles from Halsema Highway are pegged at 297,540.

To better air quality and ease congestion, a parking area for visitors and tourist entering the city at the outskirts is being planned.

A carless day was also implemented by some government agencies while establishments of green buffer zones are being eyed to absorb the carbon dioxide emitted by vehicles.

Baguio City has also purchased the latest state of art air sampling equipment and the installation of electronic Ad Board for advisory on Air Quality Index while strictly implementing the anti-smoking policy which is aimed to clean the air as well as to protect the health of smokers and nonsmokers alike.

Sources of pollution in the city are identified as residential- domestic sources, backyard piggeries and commercial establishments

The Environmental Management Bureau recommends the non-issuance of building permits for new buildings without its own wastewater treatment facility and the halt of additional sewer connections to the Baguio Sewer and Treatment Plant (BSTP).

The EMB also recommended the demolition of existing backyard piggeries in urban areas in compliance with zoning regulations. Removal of illegal occupants/structures within the river easement and to have Environmental permits as part of the requirements for accreditation by the Department of Tourism for tourism facilities.

The EMB hopes for a public disclosure of erring establishments, strict implementation of the setback requirements for vertical structures, a moratorium in the construction of hotels, restaurants, condominiums meanwhile that the BSTP’s capacity is not yet expanded and a prosecution of violators including concerned national and local governments for inaction.

The EMB plans to upgrade the existing BSTP at Sanitary Camp, needing P293.37 million and the construction of Slaughterhouse Wastewater Treatment Facility costing P20M, construction of Decentralized Wastewater Treatment Plant at Lower Rock Quarry, pegged at P148.59M and the rehabilitation of the Main Sewer line & additional line to cover the Public Market Wastes with a cost of P240M.

The city fought to clear the names of proven allies from the national government which tagged them as terrorists.

Lawmakers stood by Victoria Tauli Corpuz, Joan Carling, Beverly Longid, Jose Molintas, Joanna Cariño, Windel Bolinget, and Jeanette Ribaya Cawiding who were tagged by the Justtice Department as terrorists as part of its petition to declare the Communist Party of the Philippines and its armed wing, the New People’s Army, as terrorist organizations under the Human Security Act.

The city vouched for the group and said the tagged individuals are residents of the city and have never joined the revolutionary groups but are passionate and active with their advocacy on human rights and indigenous peoples rights both locally and internationally.

The tag was later dropped for Tauli and Molintas but remained for the rest of the group.

Ruffling a few feathers, the city’s ban on profanity elicited a statement from the Palace.

The law penned by Councilor Lilia Fariñas was crafted to lessen spur of the moment bouts caused by foul language.

The law applies to all schools, computer shops and other business establishments frequented by children.

Farinas’ proposed measure aims to rid the city of the “revolting habit can be observed most often in computer shops where children of different ages play games, especially those that engage in war games and feudal battles which cause them to insult each other with indecent and profane language, as if it were okay to do so.”

Hopes are high for the formation of the Baguio, La Trinidad, Itogon, Sablan, Tuba and Tublay Development Authority (BLISTTDA).

A senate hearing led by Senator Dick Gordon will convene a public consultation on the proposed move at the start of the year.

The move is believed to set into place development in Baguio and the neighboring towns.

The body will also render services having wider coverage and impact as well as rationalize the usage of infrastructures and thoroughfares, transport and traffic management, environment, tourism, water supply and waste management, migration, and housing.

The move was made by Baguio Representative Mark Go who is confident on the support of the Senate and is hopeful that this bill will be passed into law before the 17th Congress ends.