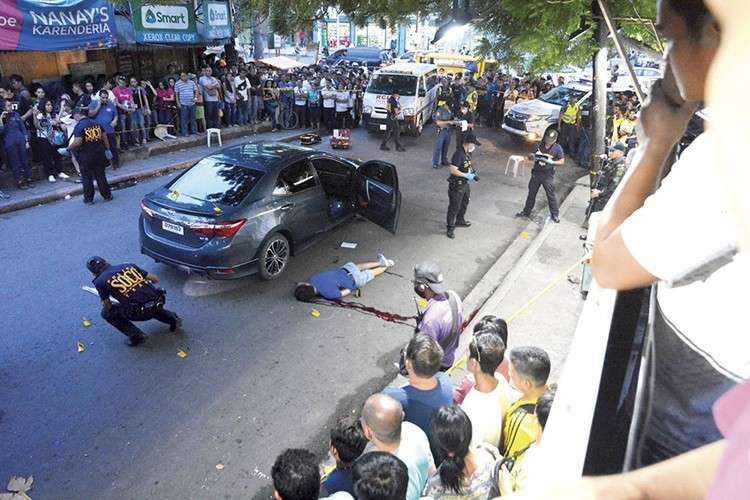 Unsolved killings. Extrajudicial executions have remained largely unsolved in the country, which not only discourage Filipinos from sharing the stake in making the country work but also deprive the indigent from access to essential services in health, economic self-sufficiency, and human rights. (SunStar File Foto)

IN and outside the Negros Oriental Provincial Hospital along the national highway are eddying currents of people. This is a hub in community life, with only two jarring notes: the tarpaulins posted on the fence, calling for justice for the unsolved killing of Dr. Avelex Amor.

The chief medical officer IV of the Canlaon District Hospital was driving to Dumaguete City on Nov. 20 when he stopped to urinate beside the national highway in Barangay Basak in the Municipality of Guihulngan.

According to media reports, the doctor was shot dead by one of two men riding a motorcycle at about 8 a.m..

Amor was the seventh doctor killed in the past two years, according to Health party-list Aksyon Health Workers. According to a Nov. 23, 2018 article posted by the “Negros Daily Bulletin,” Dr. Joshua San Pedro of the party-list group cited the unsolved deaths of other health workers, such as Dr. Dreyfuss Perlas of Lanao del Norte, Dr. Shahid Sinolinding of Cotabato City, Dr. George Repique of Cavite, and Dr. Vicente Soco of Dinagat Islands.

San Pedro noted that the extrajudicial killings do not just sow “a climate of fear and brazen human rights violations.”

The “culture of impunity” over the unsolved killings of health professionals may curtail further the delivery of health care to areas where people are most deprived of basic services.

The killing of Amor took place two weeks after human rights lawyer Benjamin Ramos Jr. was shot dead in Kabankalan City in Negros on the evening of Nov. 6 by unidentified men.

There have been no significant developments in the investigations of the crimes committed against Amor and Ramos, a pattern of silencing and obliteration observed with nearly all victims of extrajudicial killings in the country.

According to the Human Rights Watch (HRW) World Report 2018, the Philippines endures its “worst human rights crisis” under the administration of President Rodrigo Duterte since it was ruled by the Marcoses in the 1970s and 80s.

While the focus has been on the “War on Drugs” that so far “claimed an estimated 12,000 lives of primarily poor urban dwellers, including children,” the attacks also target human rights defenders, including critics and political foes of the present administration.

Aside from the media and the clergy, President Duterte aims his attacks for human rights groups and advocates, declaring in August 2018 to the police that “If they are obstructing justice, you shoot them,” reported the HRW.

Impunity is the chilling tandem of these killings: “No one has been meaningfully investigated, let alone prosecuted, for any of the ‘drug war’ killings,” reported the HRW.

It is only the efforts of the victims’ families, colleagues, friends, rights advocates, and other members of civil society that keep the focus on the unsolved killings and the possible connection with the victims’ work.

Struck down were people like Amor and Ramos who devoted their training, resources, and ultimately their lives to bring social justice to the deprived and end corruption that resulted in the wastage of public resources that could have been put to better use for the people.

At the time of his death, Ramos was the secretary general of the National Union of Peoples’ Lawyers Negros Occidental chapter. He assisted the National Federation of Sugar Workers whose nine members were killed by gunmen at Hacienda Nene in the Negros town of Sagay.

When Amor was appointed as the chief of the Canlaon District Hospital on Aug. 6, he instituted mechanisms that resulted in an increase in the hospital income. He refused to sign tampered daily time records, which resulted in the non-payment of salaries.

The miscarriage of justice fails not only the felled victims and their families but also the Filipinos deprived of these modern heroes’ services.