So kids may see 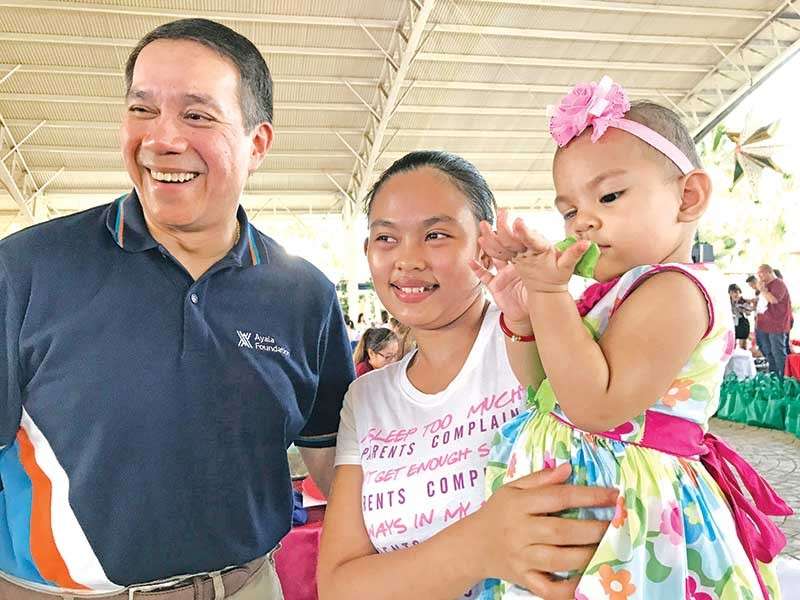 DAVAO. Ayala Foundation president Ruel Maranan with baby Cheska and her mother Juvielyn during the 10th Survivors Day of the House of Hope Foundation for Kids with Cancer Inc. last December 8, 2018. (Stella A. Estremera) 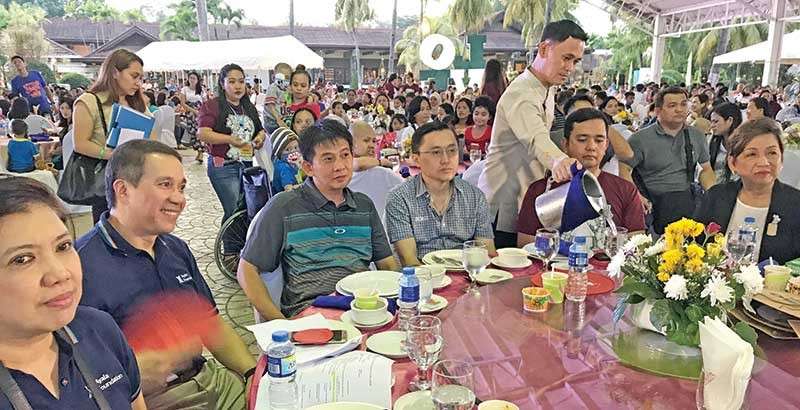 DAVAO. The tent of Waterfront Insular Hotel was filled with cancer survivors and their families during the Survivors Day. Among the celebrators were Maranan and his staff, Secretary Christopher Lawrence T. Go, House of Hope president Frederick Rubinos, and Ambassador Minda “Mindy” Calaguian Cruz, the driving force behind Ambassadors of Hope. (Stella A. Estremera) 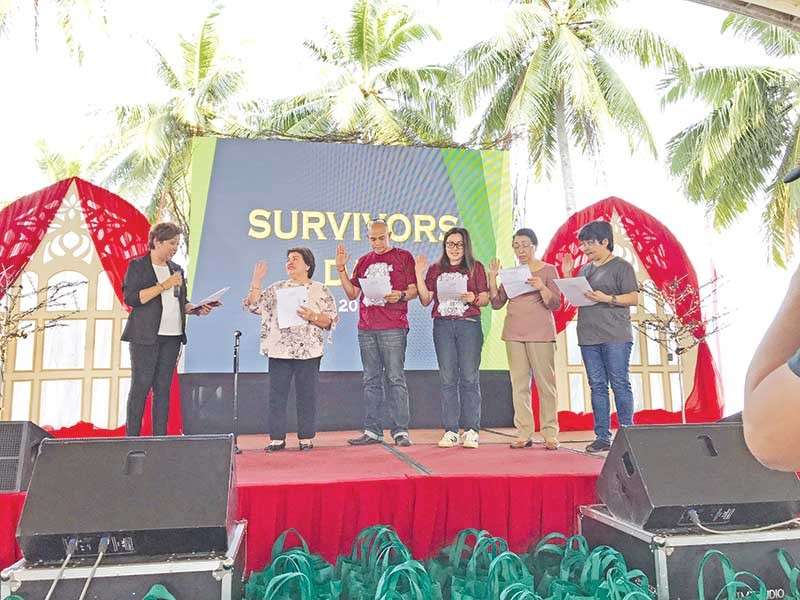 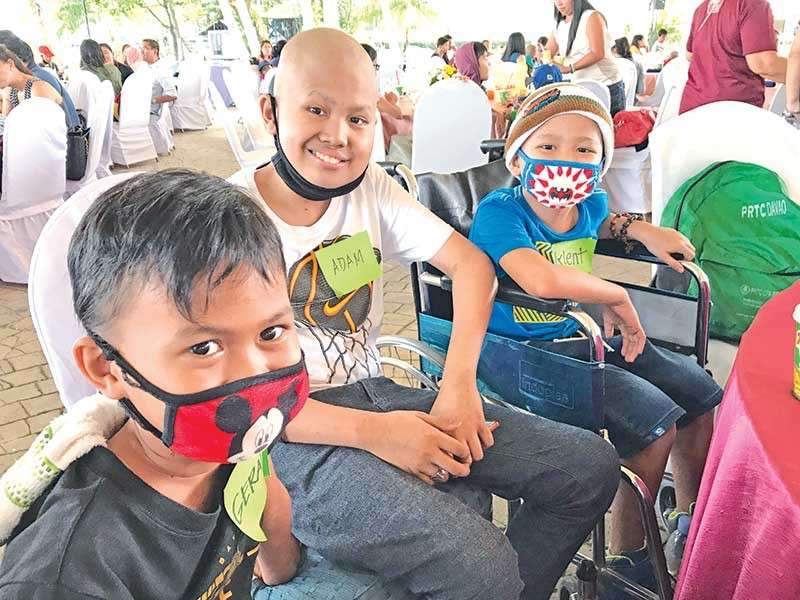 DAVAO. Three of the many children (Stella A. Estremera)

FRANCESCA Dael was less than a year old when she arrived from Tanjay, Negros Occidental in the Visayas at the Children's Cancer and Blood Diseases Unit of the Southern Philippines Medical Center (SPMC) Cancer Institute (CI) on March 13, 2018.

In Makati City, Ayala Foundation Inc. president Ruel Maranan has embarked on a program that traces and revives the foundation's history of engagement in Mindanao -- that spans from Marawi to Basilan. One of her two daughters is also named Francesca.

Under ordinary circumstances, the two would not have met nor even know of each other's existence.

Baby Dael or Cheska was eight months old when diagnosed with Retinoblastoma, a rare form of cancer that rapidly develops from the immature cells of a retina, at Chong Hua Hospital and Cancer Center in Mandaue City, Cebu.

Cheska's father, Cres Isaac A. Dael, who used to work for a telecommunication company was out of job, her mother Juvielyn, is a full-time mom. Being told that their baby has retinal cancer could not have come at a worse time. They asked around where else they can get a second opinion from because Chong Hua is a private hospital.

Cres' cousin is a medical representative in Cagayan de Oro City. He chanced to ask a doctor. The doctor is one of House of Hope Foundation for Kids with Cancer Inc. satellite site coordinators. That was how they learned about CI and House of Hope. House of Hope provides half-way shelter, education, and treatment for its children with cancer for free.

At around that time, Maranan arrived in Davao City to check out what Ayala Foundation can focus on.

He asked their colleague with the Makati Business Club to bring him around town.

He could not believe that Davao's version of a public hospital is far better than many private hospitals in the national capital. SPMC is a good template, he said, that public hospitals all over the country can learn from.

SPMC director Dr. Leopoldo Vega toured him around the facilities of the country's biggest government hospital and when Maranan said that he would study what they can collaborate on, Dr. Vega assigned Doctor Mae Concepcion J. Dolendo to be his link.

Dr. Dolendo, seeing the opportunity in a partner for the growing needs of the Cancer Unit that by now was already serving the whole country and not just Southern Philippines, contacted Maranan to seek his assistance for an 840 nm Diode Laser equipment for eye cancer in children and melanoma in adults.

Coincidentally, Maranan recently suffered retinal detachment due to stress and some other condition. He was blind for one full month.

"It's something I would not wish on my enemies," Maranan said. Thus, it was easy to convince him to find means to help.

Through their network of partners, they were able to put down the equipment's price to a much affordable rate.

But Dr. Mae had something more up her sleeve.

It was Cheska's photo, which Maranan used in his presentation to the Management Committee of the Ayala Foundation that made the board decide to fund the laser equipment. And that is how SPMC got the only high power laser diode in the whole Mindanao.

Seeing how House of Hope attends to its patients and work hard for its children, the foundation is looking at collaborating for other projects.

Last December 8, 2018, during the House of Hope's 10th Survivors Day to celebrate the life of those who survived and remember those who passed on held at the tent of Waterfront Insular Hotel, Maranan got to meet baby Cheska who by now is already a toddler gamely posing for their cameras. It was a heart-warming scene as Maranan remembered the eight-month-old Cheska.

"Noong unang dinala 'yan, akala mo upos na (She was like a dying ember when she was first brought to SPMC)," he said of Cheska last year.

Maranan insists that he is but the coordinator, the collaborator for Ayala Foundation, who brings the concerns of partners to their board. It is the board who decides which ones to approve. But with a foundation as hardworking as House of Hope attending to a growing number of charity cases of children with cancer all over the Philippines and sustaining a network of satellite sites all over Mindanao, it is easy to seek support for help.

"Noong pinadala niya 'yung picture ni Cheska pinadala ko sa report ko sa mancom. For almost a minute, tahimik yung mancom doon. So doon, sabi ko explore tayo, let’s keep our lines open (Doc Mae sent me Cheska's photo to show who will benefit from the machine, which I used for my mancom report. There was silence for around a minute when the Mancom saw the photo. That was when I said, let's explore more partnerships, let's keep our lines open)," he said.