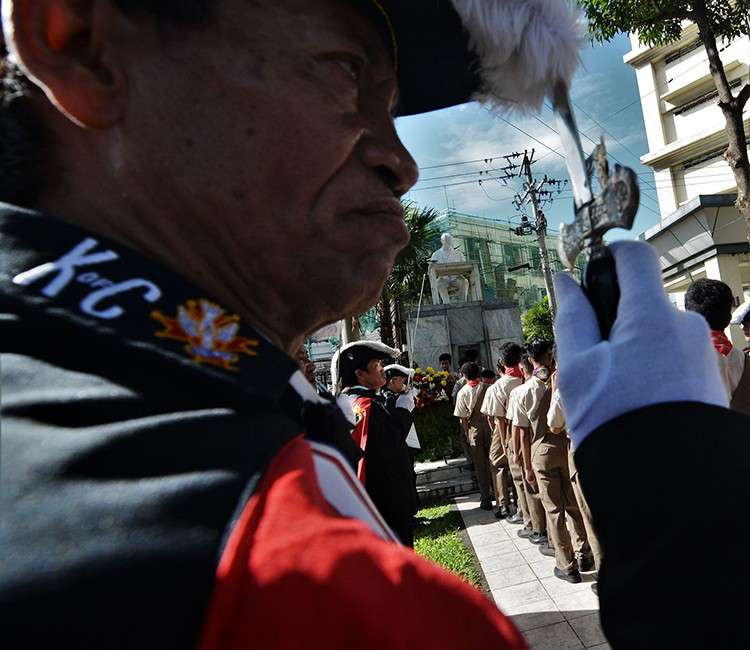 Honoring Rizal. Members of the Knights of Rizal stand on guard while a group of boy scouts line up to lay flowers at the monument of Dr. Jose Rizal at the Plaza Sugbo during the 122nd anniversary of the hero’s execution. (Sunstar Foto / Amper Campaña)

WITHOUT the valiant efforts of Dr. Jose Rizal, the country will not be what it is today.

“Without the sacrifices of Dr. Jose Rizal and other people like him, we would be even still speaking in Spanish, if not Japanese or some other language,” Osmeña said.

The mayor also thanked City officials and members of civic groups for joining the City’s activity despite it being on a holiday.

“I want to thank all of you for taking the time to be here because you’re the ones that serve as a reminder to all the Filipinos that at one time, there was a man who had nothing but his own spirit, faith and hope for the betterment of our country. We thank Dr. Jose Rizal and we thank him every year for what we are today,” Osmeña said.

Members of the Knights of Rizal led by Sir Rittie Subingsubing also expressed their gratitude to the City Government for renaming the City Hall Lane at Plaza Sugbo to Dr. Jose Rizal St. through an approved ordinance last June. The measure was sponsored by opposition Councilor Joy Pesquera.

“We’re celebrating a yearly activity and as a proof of the government’s support, our City Council led by Vice Mayor Edgardo Labella and approved by Mayor Osmeña, this area that we’re standing right now is now known as Dr. Jose Rizal St.,” Subingsubing said.