Palace brags of Duterte's accomplishments in 2018 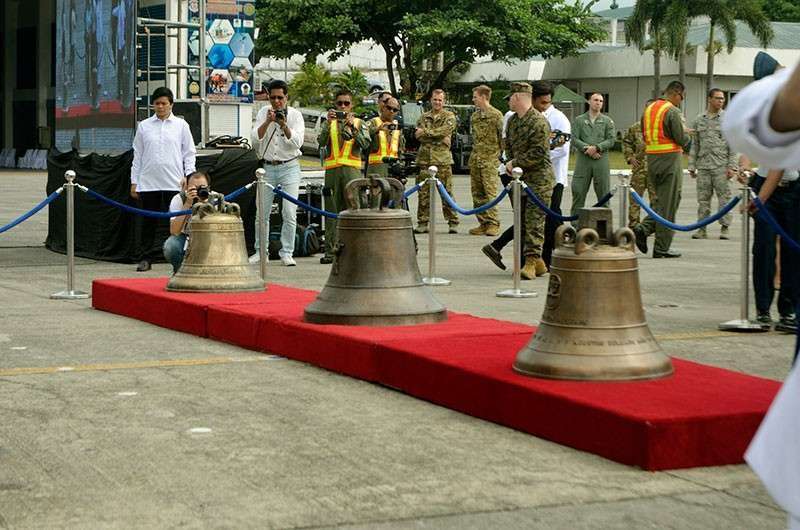 MANILA. The US government returned the Balangiga bells more than 100 years after American troops took these as war booty during the Filipino-American war. (File Photo)

WITH less than 24 hours before 2018 ends, Malacañang on Monday, December 31, bragged about President Rodrigo Duterte's "strong and decisive" leadership which has advanced the nation's interests and people's concerns this year.

The Palace official also cited the efforts of Duterte's administration to end short-term and temporary work arrangements, which paved the way for the regularization of 411,499 workers as of December 3 this year.

He also emphasized that this year, the Overseas Filipino Bank was established to provide efficient remittance services, low service rates and profitable offers to OFWs.

Panelo also noted that this year, Mislatel Consortium was declared as the new major player in the Philippine telecommunications sector.

This year, some notable executive orders were also inked by Duterte, among them for the protection of the right of all workers to security of tenure, revival of barter in Mindanao and the increase in employees' compensation benefits in the private sector and career's allowance in the government.

Duterte's brutal crackdown against illegal drugs resulted in the arrest of 164,265 drug personalities and the declaration of 9,503 villages as drug-free as of December 2018, according to the yearend report.

Some 17 Boracay officials were also charged and 186 local officials were stripped of police deputation as Duterte continues to fight corruption in government.

Since Duterte assumed office, the National Security Council has continued to monitor, discuss, and resolve critical security issues and concerns through the Cabinet cluster on security, justice and peace.

With regard to long-standing disputes in the resource-rich South China Sea, the Cabinet security cluster "recommended courses of action by the Philippine government on the political, diplomatic and socio-economic impact of the arbitral tribunal award."

When it comes to anti-narcotics drive, recommendations that seek to address public reactions to the list of government officials involved in illegal drugs and issue of extrajudicial killings have been provided.

The report stressed that under the President's watch, the country's economy has been continuously growing, citing the National Economic and Development Authority's report that the Philippine economy "has been growing at least six pecent for 14 consecutive quarters now."

Trade, construction, and manufacturing, meantime, were the "main drivers" of gross domestic product growth in the third quarter of 2018, it also noted.

Next year, the Duterte government is looking forward to the signing of the Proposed National Identification System; plebiscite for the Bangsamoro Autonomous Region in Muslim Mindanao; and the hosting of the 2019 Southeast Asian Games.

"2019 will certainly be an exciting year with the following milestones, which started this year beginning to bear fruit," Panelo said.

"With all these at the helm, the Duterte administration will certainly enter the new year with enthusiasm and vigor in serving the people. The outpouring support from the Filipinos will continue to inspire this administration to work harder for the benefit of the greater populace. Together, we shall move forward for a better and more prosperous Philippines," he added. (SunStar Philippines)
< Previous PageNext Page >