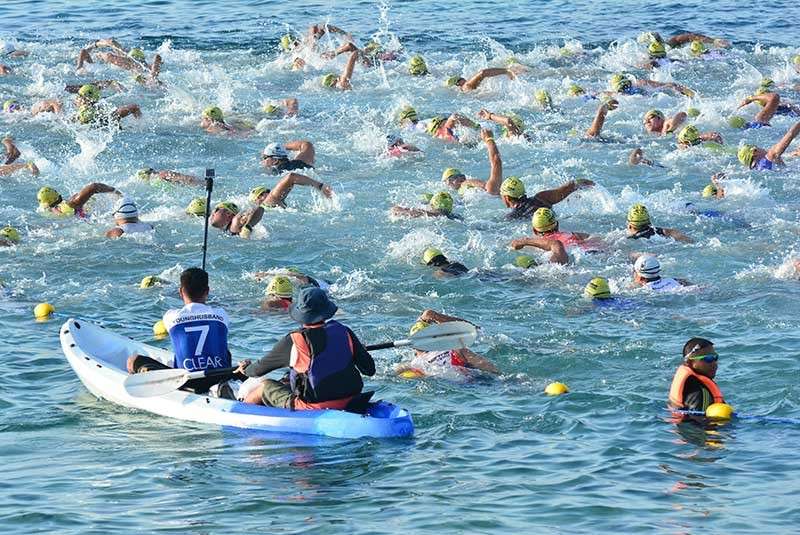 WORLD-CLASS SPORTS EVENTS. The Department of Tourism 7 is positioning Cebu as a water sports hub in the country. It said it will calendar the all-year- round water sports actvities to attract more tourists to visit Central Visayas. (SunStar file photo)

THE Department of Tourism (DOT) 7 said it will calendar all world-class water sports events in the region starting next year to position Central Visayas as a water sports hub.

DOT 7 Director Shahlimar Tamano said the region is blessed with natural resources that allow water sports activities to flourish. He said by organizing this event all year round they can market the region well in the area of sports tourism.

“There are plenty of water activities going on in the region, and all we have to do is gather and organize them. By doing this, we could create a strong product for Cebu that tour operators and agents could sell to water sports enthusiasts,” said Tamano.

Among these activities are the dragon boat race in Naga, free diving in Panglao, and triathlon, among others. Tamano added they would also bring in the international deep photography for Cebu and Bohol.

“We are a big contributor of tourism in the country, so by positioning the region well in all products of tourism like sports, the region will stand to benefit from these,” said Tamano.

Moreover, the DOT official announced that beginning next year arnis will be part of Cebu’s cultural promotions.

Tamano said they have already allocated funds to include arnis in all cultural presentations or shows in the region.

This initiative, he said, is meant to prepare Cebu for its hosting in the 2021 International Arnis Competition, at the same time to start creating noise about arnis as a cultural tourism product that originated in Cebu, specifically in Mactan Island.

“For me, arnis is a culture at the same time sports,” said Tamano, adding that it is high time to boost the promotion of arnis as one of Cebu’s pride.

This promotion could be likened to the way Japan has promoted sumo and samurai as an attraction which lures fans from all over the world to witness and learn from. The same goes for Capoeira, an Afro-Brazilian martial art that combines elements of dance, acrobatics and music, and Muay Thai, a combat sport of Thailand, which draw in tourists who are interested in sports and culture.

“Arnis has become an international product, but it has not received proper attention (here),” he said. “It is absurd that it is Hollywood that promotes arnis.”

Tamano added arnis’ promotion should be hyped leading to the 500th anniversary of Ferdinand Magellan’s circumnavigation of the globe in 2021.

Arnis was what the warrior Lapu-Lapu used to defeat Magellan when he landed in Mactan.

Arnis, also known as kali or eskrima, is originally known as arnis de mano or “harness of the hand.” It is the art incorporating empty-handed fighting as well as techniques with a variety of weapons specializing in short sticks and knife techniques.

Arnis was declared in 2010, a national martial art and sport. The law was authored by Sen. Juan Miguel Zubiri.

Earlier, Tamano said his office had already sought the support of the agency’s Tourism Promotions Board (TPB) to market arnis as one of Cebu’s cultural products.

Tamano said he already met with TBP officer-in-charge Arnold Gonzales during the latter’s visit here to include arnis in its promotional tools when marketing Cebu locally and abroad.

He believes the promotion of arnis will further contribute to Cebu and to the region’s tourism growth if marketed aggressively, especially during travel shows abroad. (KOC)