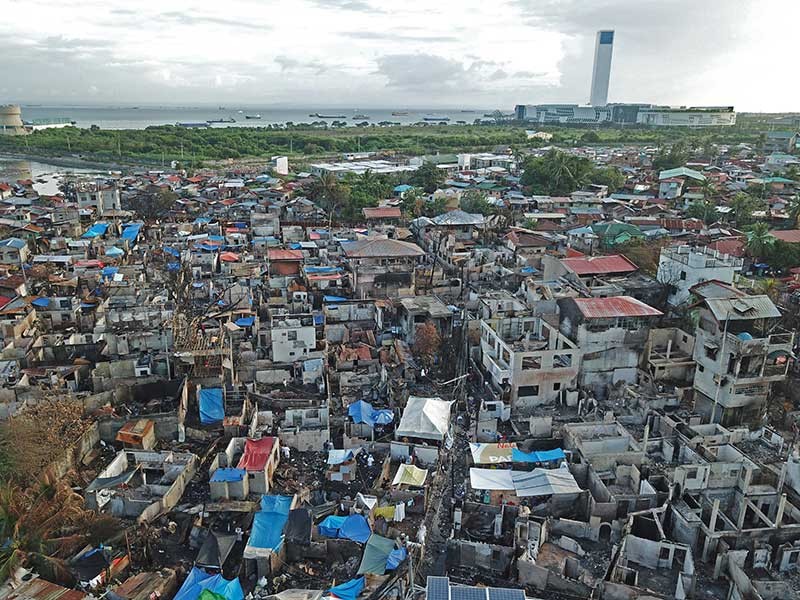 DISASTER SO COSTLY. An aerial view of the aftermath of the Barangay Duljo-Fatima fire on Christmas dawn. The city’s disaster agency says fire tops the list of disasters that hit the city, year in and year out. (SunStar photo/Allan Cuizon)

WHILE there may have been several things to be grateful for, one cannot deny the year 2018 brought along with it a handful of disasters in Metro Cebu.

Cebu City, for example, began and ended the year with two huge disasters.

Just five days into 2018, the Metro Department Store and Supermarket at the Ayala Center Cebu was gutted by a blaze that took firefighters three days to put out.

A few hours after celebrating Christmas Day, an argument between a couple from Barangay Duljo-Fatima did not only cause the biggest fire to hit the city this year, but also left hundreds of families welcoming the new year in evacuation centers.

“Number one on the list of disasters is recurring human-induced fire. In general, it’s not a special case for Cebu City since this is actually prevalent in developing countries,” he said.

Among the cities, Cebu City tops the list with the most number of fire incidents at 266 cases.

An unofficial tally shows that there were at least 15 huge fire incidents in Metro Cebu in the past 12 months.

Thirteen of these hit residential areas, while the other two involved Metro Ayala and the Cebu City Market Authority’s office at Unit 3 of Carbon Public Market.

Around 3,000 houses were razed, while an estimated 3,500 families, or more than 12,000 individuals were left homeless. Total damage estimates were placed at nearly P300 million.

The fires also claimed seven lives, five of them of children.

The first fire incident in 2018 and the costliest until recently, happened on Jan. 5. A blaze broke out in the eight-level Metro, one of the two anchor stores of Ayala, at 9:30 p.m.

Then BFP-Central Visayas Director Samuel Tadeo said damage to property was estimated at P100 million. He said plastics and clothes contributed to the fire.

In a disclosure to the Philippine Stock Exchange, the Metro Retail Stores Group Inc. (MRSGI) announced the temporary closure of its store in Ayala.

Three months later, the Metro Supermarket found a temporary home in a 900-square-meter space previously occupied by the Rustan’s Department Store in Ayala.

MRSGI is looking forward to a brighter 2019 as it hopes to completely rebuild its fire-torn store by the second half of 2019.

The same, though, cannot be said for the 659 families, or 3,075 individuals left homeless by the Christmas blaze that hit seven sitios in Duljo. The affected sitios were Buli, Ponyang, Mansanitas, Catwalk, Plastikan, Pasong Kabayo and San Pedro.

Last Friday, Dec. 28, the City Council approved the resolutions of Councilors Dave Tumulak and Alvin Arcilla declaring the barangay under a state of calamity.

Placing fire-hit areas under a state of calamity allows the local government to access calamity funds to help survivors.

The barangay council of Duljo-Fatima declared a state of calamity on Wednesday, Dec. 26.

Although the City Government is already working on plans to re-block the affected areas, the displaced families will have to wait until after New Year’s Day as government services are temporarily closed for the holidays.

Bañacia, though, stressed that survivors of earlier fire incidents have already started rebuilding their houses.

“Because fire is our number one disaster, we must address this by re-blocking the affected area. One way is to address road encroachment. We have to make sure their electrical connections are improved, among others. During our consultations, we always tell the fire survivors that our purpose for re-blocking is not for your use today, but for your grandchildren. Our position is that they should not be fire victims again in the future,” he said.

Bañacia said that while disasters are unpredictable, most fire-related incidents in the city happen in urban poor barangays.

These, too, happen to be the largest incidents.

On Jan. 14, around 1,314 individuals, including participants of the Sinulog sa Dakbayan, lost their homes to a fire in Barangay Pasil.

The following month, on Feb. 1, some 1,300 individuals were left homeless after their houses were gutted in neighboring Barangay Sawang Calero.

Just a stone’s throw away, two sitios in Barangay Ermita were torn by an early morning fire on May 7. It destroyed 300 houses and left 2,500 individuals homeless, including village chief Mark Rizaldy Miral and his councilman.

A few months later, on Sept. 27, around 115 houses, including that of alleged drug lord Kerwin Espinosa, were razed in Sitio Capha, Barangay Hipodromo.

There was also a village that was hit by fire on two occasions.

On Aug. 4, around 235 families, or 900 families, lost their homes and belongings to a fire that gutted Sitio Lower 3 in Barangay Kamputhaw.

Not even four months later, on Dec. 5, Purok 3 of the same barangay was razed by a blaze that displaced 194 families, or 700 individuals.

To prevent the same incident from happening in the same areas, Bañacia said the City Government implements a re-blocking and subdivision plan.

The City also extends P20,000 to those whose houses were completely destroyed by fire, while P10,000 is given to those with partially damaged houses.

The problem, though, is that not everyone is able to rebuild their homes sooner.

Fire, though, was not the only disaster to hit Metro Cebu in 2018. (To be continued)