Naga landslide will be etched in our memory 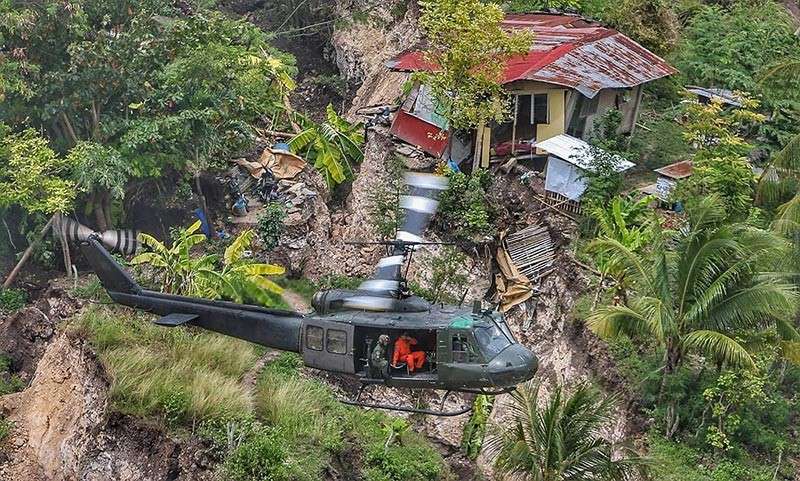 AERIAL SURVEY. A helicopter conducts an aerial survey on the extent of the Naga landslide on Sept. 20, 2018. (SunStar photo / Alex Badayos)

FIRE is not the only disaster to hit Metro Cebu in 2018.

Last Sept. 20, 2018, a massive landslide hit Barangay Tinaan in the City of Naga, killing 78 persons who were all buried alive.

Around 1,600 families, or 6,487 individuals, had to stay in 11 evacuation sites as the City Government of Naga and the National Government worked on their relocation.

Except those living near the landslide area, the evacuees were able to return to their homes before the Christmas holidays.

City of Naga Mayor Kristine Vanessa Chiong said that of the 1,400 families that stayed in the evacuation sites, around 975 families were able to return home.

The 975 families were living in red and green zones identified by the Mines and Geosciences Bureau (MGB) as critical and regulated habitation zones.

Before they were allowed to go back, the families had to attend information and education seminars conducted by the City Government and the MGB.

Chiong said the families were also issued warning cards that would identify what area of the red and green zones they are situated in.

A total of 444 families who used to live in the “maroon” or danger zone, which is within Ground Zero of the landslide, were prohibited from returning to their homes.

The City Government gave P150,000 to each of the 444 families. Of the amount, P50,000 is the humanitarian financial assistance, P50,000 if the family’s house was destroyed in the landslide or during the search and retrieval operations; and another P50,000 if they refused to avail themselves of the relocation sites offered by the National Government.

Once they accept the cash assistance, they are required to leave the evacuation site where they are currently staying and will have to relocate to another area far from their original home.

Those who accepted the free housing assistance provided by the National Housing Authority (NHA) will have to wait for a few months before they could get a housing unit.

The NHA committed to construct 320 houses on a portion of the Balili Property that was identified by the MGB as safe for construction, while the City also set aside P25 million for the construction of 80 houses.

The developmental works for the relocation site, which started last October, is ongoing.

Not only residents were forced out of their homes.

Two months after the deadly landslide, Chiong ordered the immediate evacuation of the inmates of the new City of Naga Jail in Barangay Naalad after the MGB gave the area where the facility is located a “high to very high” landslide susceptibility rating.

Last Nov. 30, nearly 500 inmates from Naga were transferred to the Cebu City Jail’s (CCJ) female dorm after tension cracks were found near the facility. Of the 421 inmates, 34 are females and 387 are male.

According to Cebu City Councilor Dave Tumulak, the inmates from Naga will stay at CCJ until March 2019.

Naga Jail Warden Roberto Crisanto Alpon III the inmates will be in CCJ while rehabilitation of the Naga facility, particularly slope stabilization activities, is ongoing.

However, work has yet to start as the City Government of Naga needs clearance to conduct civil work in the area.

If it gets the clearance, Alpon said, the rehabilitation is expected to run between three and five months. (JKV, RTF)