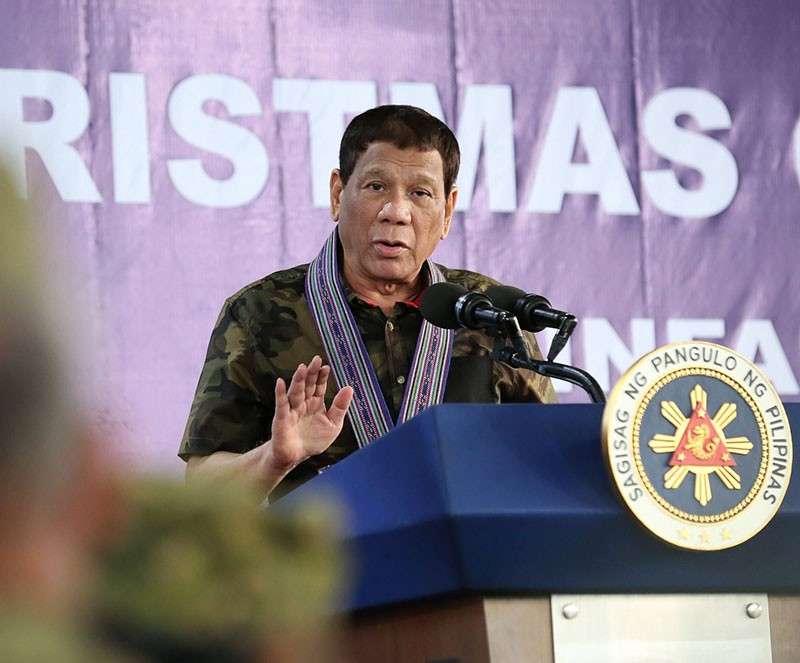 PRESIDENT Rodrigo Duterte on Thursday, January 3, said the illegal drugs problem in the country is "kind of under control", but still needs to be curtailed further.

Duterte renewed his vow to go after "big-time" drug personalities in his last three years in office, saying he would slit their throats in front of human rights advocates.

"Nasabi ko na eh. Huwag. Huwag dito sa akin. 'Pag big-time ka, hindi kita papatawarin. Sa harap ng human rights, I will slit your throat. Wala akong pakialam (I already warned you not to do it, not under my watch. If you're a big-time personality, I will not forgive you. In front of human rights, I will slit your throat. I don't care)," he said during the birthday celebration of former presidential adviser Francis Tolentino on Thursday, January 3.

"Ginawa ko. Ginawa ko (If I do it, I do it). Am I sorry for it? Of course not. Will ever do it again in the remaining years? I will, hanggang matapos lahat iyan o tapusin nila ako (until I kill them all or they kill me). Dalawa lang iyan (There are two consequences), either you finish me off or I finish you all. Ganoon lang ang buhay (That's how life is)," he added.

Some 5,050 drug personalities have died in the course of 115,435 government anti-drug operations conducted from July 1, 2016 to November 30, 2018, based on the records of the Philippine Drug Enforcement Agency.

Since taking power in 2016, Duterte has waged a bloody campaign against illegal drugs.

In his State of the Nation Address in 2018, he vowed to wage a "relentless and chilling" war on drugs.

Duterte, however, admitted in his latest speech that has been a challenge to end the narcotics trade in the country because some high-ranking police officers and personnel of Bureau of Customs were even involved in the illegal trade.

"There were certain generals involved. So nalaman ko pati Customs. Lahat na (And even Customs personnel were involved. All of them). So kung ganito (if that's the case), I could not really fulfill my promise to do away with drugs within six years. Impossible. It's going to be a continuing one," he said.

"It's the bane of all countries right now. Pero I'm just warning for the remaining three years na 'yung malalaki, talagang tatamaan 'yan. And if you ask me kung mamamatay 'yan, mamamatay talaga 'yan (But I'm just warning that I will focus on the big-time drug offenders in the remaining three years. And igf you ask me if they will die, they will really die)," Duterte added. (SunStar Philippines)