No standing in bus 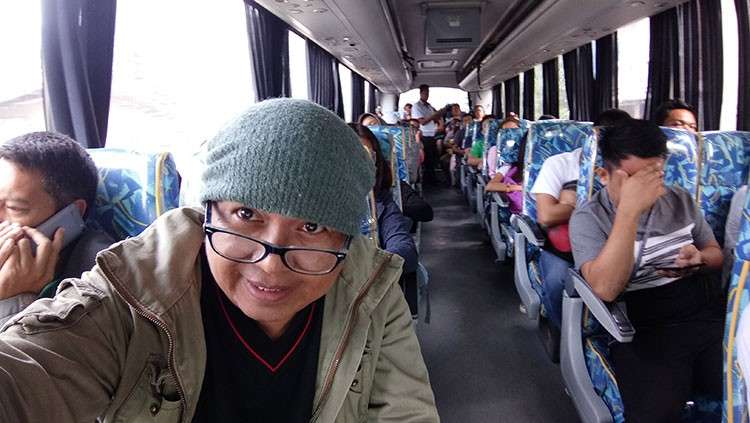 CEBU. Starting January 2019, the regulation of "no standing" in buses that ply beyond 15 kilometers will be enforced. This photo shows the situation in a Ceres bus on January 3, 2019. (Contributed photo)

This, after the Land Transportation Franchising and Regulatory Board (LTFRB) 7 announced that it would strictly implement its “no standing” policy in PUBs to prevent overloading.

Bus operators whose drivers are caught violating the policy could face fines of P5,000 for the first offense and more in subsequent offenses, said LTFRB 7 Director Eduardo Montealto Jr.

But some operators are asking the LTFRB to reconsider implementing the policy during holidays when more passengers are expected.

Montealto told Superbalita Cebu that the policy has been in effect since 2005.

Overloading in public utility vehicles is prohibited under Republic Act 4136, or the Land Transportation and Traffic Code, and the LTFRB Joint Administrative Order 2014-01.

Montealto said that since November, they’ve been apprehending bus drivers who violated the policy following the creation of the Inter-Agency Council for Traffic, along with members of the Land Transportation Office (LTO) 7 and the Highway Patrol Group 7.

Montealto said the policy affects only buses with routes exceeding more than 15 kilometers.

“We can’t compromise the safety of our passengers. Accidents tend to happen when there are standing passengers, especially if they are tired or sleepy during the trip. They could fall or lose control of their grip on the handle during sudden turns,” Montealto said in Cebuano.

Violators that are caught will be issued a temporary operator’s permit by the LTO and an inspection report summons by the LTFRB.

The newly introduced modern jeepneys, or Beeps, are exempted from the policy since their routes are less than eight kilometers, Montealto said.

Montealto said there was a need to strictly implement the policy after they discovered that some passenger buses violated it, especially during big holidays like Christmas, New Year, Holy Week and All Saints’ and All Souls’ Days, among others.

The policy may not be popular to commuters, but it is for their safety, he said.

“We cannot compromise it (their safety) as we can’t predict accidents. If an accident occurs and overloading is found to be the culprit, the LTFRB will be blamed for allowing these buses to overload,” he added.

In a separate interview, Julieto “Julie” Flores, president of the Cebu Provincial Bus and Mini Bus Operators Cooperative, asked the LTFRB and LTO for consideration.

Flores said if necessary, the two agencies could limit the number of standing passengers to 10 people during big holidays.

Limiting the number of standing passengers would also benefit bus operators as they could save on maintenance costs, Flores told Superbalita Cebu.

However, Flores said he believes the LTFRB should consult the riding public first before implementing the policy.

Jonathan Tumulak, Cebu South Bus Terminal manager, said that while he supported the policy, he urged LTFRB and LTO to also reconsider implementing the policy considering that only a few buses operated in the province.

Vallacar Transit Inc. (VTI), the owner of Ceres Bus, said it has complied with the policy.

In his Facebook page, Balbino “Ka Bino” Guerrero, a night shift supervisor of the Cebu City Public Library, said passengers were allowed to stand inside the Ceres bus he was traveling on from the southern town of Santander to Cebu City on Thursday, Jan. 3.

Santarin said they couldn’t avoid instances when some passengers would insist on standing to get to their destinations.

LTO 7 Director Victor Caindec, for his part, said his personnel would not discriminate in apprehending violators of the “no standing” policy. (FROM SCG OF SUPERBALITA CEBU / JKV)