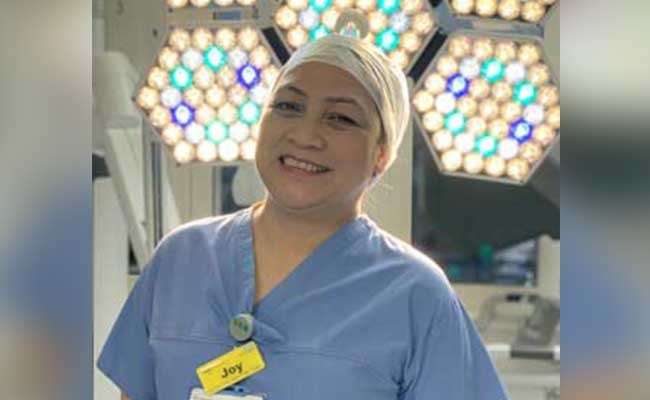 LONDON. Joy Ongcachuy in her scrub uniform. Ongcachuy led her team at the Royal London in caring for a deluge of injured people during the 2017 London Bridge terrorist attacks. (Contributed Photo)

A FILIPINA nurse was conferred an Office of the British Empire Award in the 2019 New Year’s Honours List for her contribution in treating and caring for those injured in the 2017 London terrorist attacks.

Joy Ongcachuy, a Filipino robotic lead nurse at the Royal London, who hails from Talisayan, Misamis Oriental, received the prestigious Order of the British Empire Awards on December 29, 2018, alongside two other medical professionals and members of the London police.

The Office of the British Empire Award is a prestigious award conferred on those who have “made achievements in public life,” or “committed themselves to serving and helping Britain.”

“It is a proud moment for all Filipinos to have someone like Joy recognised in the Office of the British Empire Awards,” said Ambassador Antonio Lagdameo.

“Joy’s courage, passion, and dedication to serve and care for her patients is truly an inspiring and heartwarming example,” Lagdameo said.

“I was working the night shift that night and I heard the anaesthetist’s bleep go off. We already had a really sick patient in one of our theatres, so I had to get our other theatres ready and pull a team of nurses, allied health professionals and operating department practitioners together," said Ongcachuy.

“We opened an additional six theatres that night and everyone I called dropped everything they were doing to come to the aid of the patients. No one panicked; everyone was calm and so supportive,” she said.

“Their leadership, compassion and integrity is inspiring every day, but was especially true at a time when Londonders relied on us to be there for them,” said Jackie Sullivan, managing director at the Royal London and Mile End hospitals.

According to GOV.UK, the nominee must still be actively involved in what they are being nominated for. Once the honour’s list has been drafted by the Cabinet Office Honours and Appointments Secretariat, the committee’s recommendations go to the Prime Minister and then to Her Majesty Queen Elizabeth II who awards the honour.

Ongcachuy started working at The Royal London Hospital in 2002. In a desire to begin anew with her family in the United Kingdom (UK), she and 23 other Filipino nurses joined The Royal London as a scrub nurse until she was promoted to lead nurse in 2017.

Ongcachuy said she had always wanted to be a nurse because she loves to look after people and is passionate about providing care to others.

Ongcachuy also makes sure that all new Filipino nurses feel welcomed and supported when they join the hospital she currently works in.