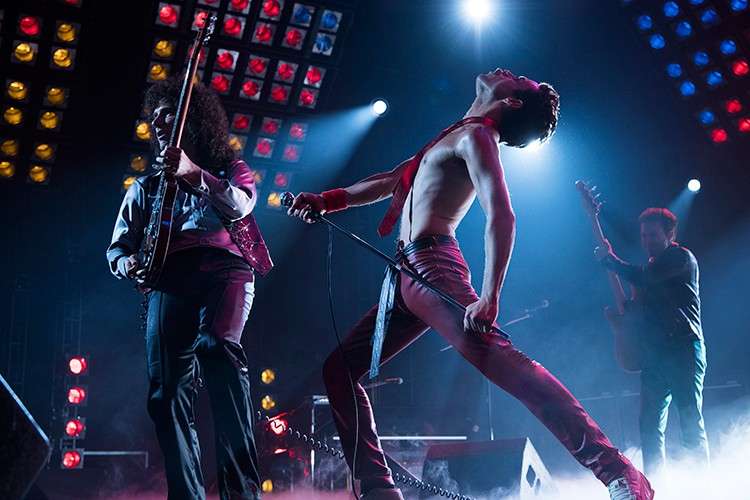 THUNDER bolt and lighting rocked the 76th Golden Globes where a string of upsets culminated with the Freddie Mercury biopic “Bohemian Rhapsody” winning best picture, drama, over another movie about musicians: Bradley Cooper’s much more heavily favored “A Star Is Born.”

“A Star Is Born” came into Sunday’s ceremony at the Beverly Hilton Hotel in Beverly Hills, California, as the presumed heavyweight and Oscar favorite. But Cooper’s remake went home with just one award, for the song “Shallow.” Instead, the night’s final two awards went to “Bohemian Rhapsody”—the popular but poorly reviewed drama about Queen’s frontman, a movie that wrapped after jettisoning its director, Bryan Singer—and best actor-winner Rami Malek for his full-bodied, prosthetic teeth-aided performance as Mercury.

“Thank you to Freddie Mercury for giving me the joy of a lifetime,” said Malek. “This is for you, gorgeous.”

Few nominees were considered more of a sure thing than Lady Gaga as best actress in a drama. But Glenn Close pulled off the shocker in that category, too, for her performance in “The Wife,” as the spouse of a Nobel Prize-winning author. Met with a standing ovation, Close said she was thinking of her mother, “who really sublimated herself to my father her whole life.”

“We have to find personal fulfillment. We have to follow our dreams,” said Close, drawing still louder cheers from women in the crowd. “We have to say I can do that and I should be allowed to do that.”

Co-hosts Sandra Oh and Andy Samberg opened the Globes, put on by the Hollywood Foreign Press Association, on a note of congeniality, including a mock roast of attendees and a string of jokes that playfully critiqued Hollywood.

Noting the success of “Crazy Rich Asians,” Oh alluded to films with white stars in Asian roles like “Ghost in the Shell” and “Aloha,” the latter of which prompted Emma Stone, who starred in “Aloha,” to shout out “I’m sorry!” from the crowd.

While the Globes, decided by 88 voting members of the HFPA, have little relation to the Academy Awards, they can supply some awards-season momentum when it matters most. Oscar nomination voting begins Monday.

Arguably the biggest boost went to “Green Book,” Peter Farrelly’s interracial road trip through the early ’60s Deep South, which has struggled to catch on at the box office while coming under harsh criticism for relying on racial tropes. It won best film, comedy or musical, and best screenplay. “If Don Shirley and Tony Vallelonga can find common ground, we all can,” said Farrelly, the director best known for broader comedies like “There’s Something About Mary.”

As expected, Lady Gaga, Mark Ronson, Anthony Rossomando and Andrew Wyatt won best song for the signature tune from “A Star Is Born.” At the time, it seemed like just the first of a handful of awards for “A Star Is Born.”

Though the Globes are put on by foreign journalists, they don’t including foreign language films in their two best picture categories (for drama and musical/comedy). That left Netflix’s Oscar hopeful, Alfonso Cuaron’s memory-drenched masterwork “Roma” out of the top category. Cuaron still won best director and the Mexican-born filmmaker’s movie won best foreign language film.

“This film would not have been possible without the specific colors that made me who I am,” said Cuaron. “Gracias, familia. Gracias, Mexico.”

Netflix also won numerous awards for the series “The Kominsky Method,” which won both best actor in a comedy series for Michael Douglas (he dedicated the honor to this 102-year-old father, Kirk Douglas) and for best comedy series over favored nominees like “The Marvelous Mrs. Maisel” (whose star, Rachel Brosnahan still won) and “Barry.”

Olivia Colman, expected to be Lady Gaga’s stiffest competition when the two presumably go head-to-head at the Oscars—though Close may now make it a three-way race—won best actress in a comedy/musical for her Queen Anne in the royal romp “The Favourite.”

Best supporting actress in a motion picture went to the Oscar front-runner Regina King for her matriarch of Barry Jenkins’ James Baldwin adaptation “If Beale Street Could Talk.”

The press association typically likes having first crack at series that weren’t eligible for the prior Emmys. They did this year with not just “The Kominsky Method” and “Bodyguard” but also the Showtime prison drama “Escape at Dannemora.” Its star, Patricia Arquette, won for best actress in a limited series.

Jeff Bridges received the Globes’ honorary Cecil B. DeMille Award. In remarks about everything from Michael Cimino to Buckminster Fuller and, of course, to his “Big Lebowski” character the Dude, Bridges compared his life to a great game of tag. “We’ve all been tagged,” said Bridges. “We’re alive.” He ended by “tagging” everyone watching. “We can turn this ship in the way we want to go, man,” said Bridges.

A similar television achievement award was also launched this year, dubbed the Carol Burnett Award. Its first honoree was Burnett, herself.

“I’m kind of really gob-smacked by this,” said Burnett. “Does this mean that I get to accept it every year?” AP