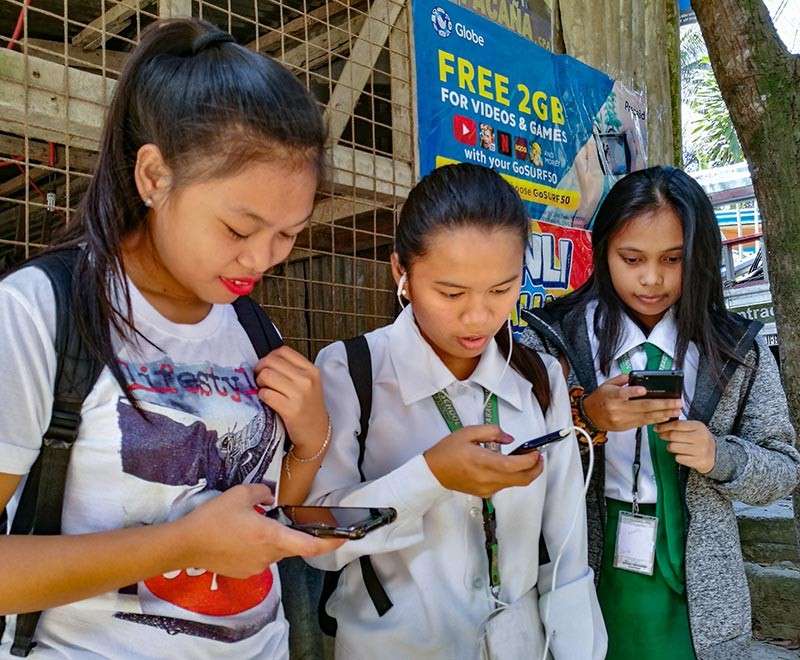 ADVANTAGES. For students in Bonbon, Cebu City, the temporary cellular site Globe Telecom erected in the mountain barangay means they can do school work more efficiently and be connected online on social media with friends. (SunStr photo / Arni Aclao)

IN THIS era, when people use social media in almost all of their day-to-day transactions, having poor cellular phone signal is a major problem. But what more to residents of a considered “dead spot” barangay, who do not have access to any stable cellular signal at all?

“If there was an emergency, we’d only find out if we went to the next barangay,” said Eduardo Cabriana in Cebuano. Cabriana is the village chief of Bonbon, a mountain barangay in Cebu City.

That was before Globe Telecom, a telecommunication company, put up a temporary cellular site that could integrate 2G and 3G signals in the area. This cellular site is expected to cater to around 6,000 barangay residents. It has operational since Sunday, Jan. 6.

Bonbon is a remote barangay 19 kilometers from the city center. Residents rely on agriculture (flower and vegetable planting) as their primary source of income.

One resident was happy with the breakthrough.

“I’ve been living here for 35 years. This is the first time that we have a stable signal. Before, we had to place our phone on top of the refrigerator where there was a hanging wires so we’d have a signal. Now, there is signal everywhere,” said Seralyn Llagoso.

She said this development could offer business opportunities to residents. “People can start selling (phone) load,” she said.

Jessa Mae Cabriana, a grade 9 student, said she and her classmates could also do school work like projects and research more efficiently.

“If we had a school project, we had to agree beforehand where and what time we would meet. If we had to do some research, we had to leave our house and go to an internet cafe, where the signal was very slow. Now, the signal is even very strong inside my room,” she said in Cebuano.

Irish Nicole Molina, 14, said she and her friends could easily connect on social media. “I’m very happy. Now, almost all my classmates are online on Facebook,” she said in Cebuano.

“Before, we had to travel 30 minutes away to the next barangay of Babag to find out if there was an emergency,” he said in Cebuano.

Patrick Gloria, Globe’s director of external affairs for Visayas and Mindanao, said a 4G LTE signal would be available in the area in two to three weeks.

Aside from the two cell sites that Globe Telecom put up in Barangays Bonbon and Guba, the company planned to put up additional cell sites in Barangays Sirao, Tabunan, and Babag. (Wenilyn Sabalo, USJ-R Intern)