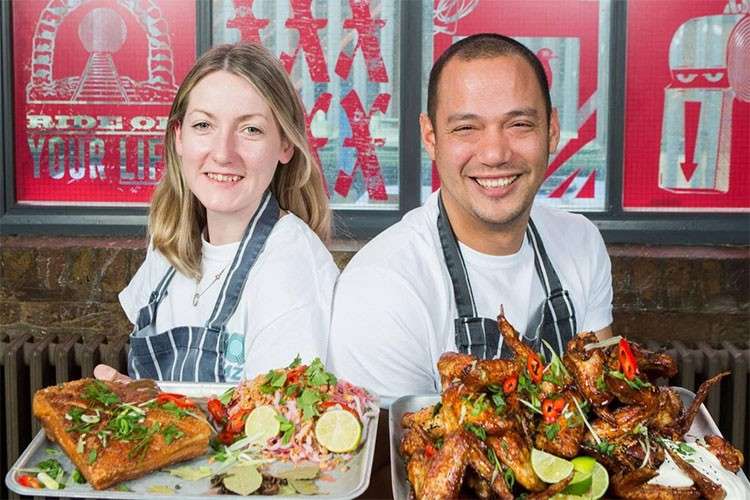 LONDON. Sinead Campbell and Lee Johnson are on the mission to share the joy of devouring Filipino food. (Photo by Matt Writtle/Evening Standard/via Philippine Embassy in London)

LONDON. Johnson and Campbell served lechon kawali during the preliminary round to a panel of investors who were unfamiliar with Filipino food. Suffice to say, it was a pleasant surprise with one of the investors saying it was one of the best pigs he tasted. (Screenshot from BBC/via Philippine Embassy in London)

LONDON-based Filipino street food operator BBQ Dreamz secured a hefty GBP 350,000 investment after wowing a panel of investors during the first episode in the second season of BBC’s My Million Pound Menu, a reality show that hopes to give emerging food businesses a big boost in the competitive food industry.

“In a business investment, you need more than a good idea,” said bar and restaurant investor Charlie McVeigh, who invested on BBQ Dreamz. “At the very least, you need a good idea, a great team, and in this case, we already got what we already know, is a sensational product. So to put money behind that doesn’t feel like that great a risk.”

The other prospective investors during the episode included Jane O’Riordnan, group strategy director of Nando’s; Maurice Abboudi, the bar and restaurant investor behind the success of big take-out brands such as Domino’s; and Scott Collins, managing director of MEATLiquor.

After a preliminary round and a two-day road test at Manchester, McVeigh and Abboudi each offered to invest in BBQ Dreamz. Johnson and Campbell eventually took McVeigh’s offer to establish a permanent restaurant.

BBQ Dreamz is founded by Filipino Lee Johnson, who moved from the Philippines to the United Kingdom (UK) when he was eight, and his Irish partner Sinead Campbell, who hails from Tuam, Galway. The two met 13 years ago in university and have been running BBQ Dreamz in the past four years.

“When people first saw me, an Irish girl do Filipino food, they were quite judgmental. They would ask me straight out, why are you cooking this food? And that’s why I used to hide a lot behind Lee. But over time now I can say that I’ve worked really hard and I know what I’m doing,” said Campbell, who has developed a deep familiarity with Filipino cuisine over the years.

Since the establishment of BBQ Dreamz, the couple has been innovating Filipino dishes from traditional recipes Johnson learned from his mother and grandmother as he was growing up.

“Filipino food is sort of difficult to nail down because it comes from a lot of different cultures,” said Johnson when asked to describe Filipino food.

In an interview with the Evening Standard, Johnson echoed the opinion of the investors that Filipino cuisine is only starting to become popular in the United Kingdom.

“Filipino Food is virtually unknown in the UK. The public need educating and that’s a big ask,” said the show’s presenter Fred Sirieix.

In the past year, the Philippine Embassy in London through its cultural diplomacy unit has been aggressively and actively promoting Filipino food through partnerships with the Filipino Food Movement UK, a group of foodies and Filipino-British chefs who are keen on pushing Filipino food into the mainstream.

“Food is a powerful way to tell the story of culture,” said Ambassador Antonio M. Lagdameo. “It becomes the starting point of a conversation and for many, a springboard towards knowing more about the culture that shaped that cuisine. Every time people dine at a Filipino restaurant or experience one of the many monthly Filipino supper clubs, they often emerge knowing a little bit more about the Philippines.”

Where to find BBQ Dreamz

BBQ Dreamz can be found at the popular KERB street food markets all over London. People can get their Filipino food fix from BBQ Dreamz at their Paddington site on Wednesdays, West India Quays on Thursdays, and King’s Cross Granary Square on Fridays. On Saturdays, BBQ Dreamz cooks at Brockley Market.

Johnson and Campbell will also be offering a GBP 28 tasting menu of the food they served during the show at MEATLiquor in King’s Cross starting 13 January. (PR)