Davao City, UP ink MOA for operation of sports complex 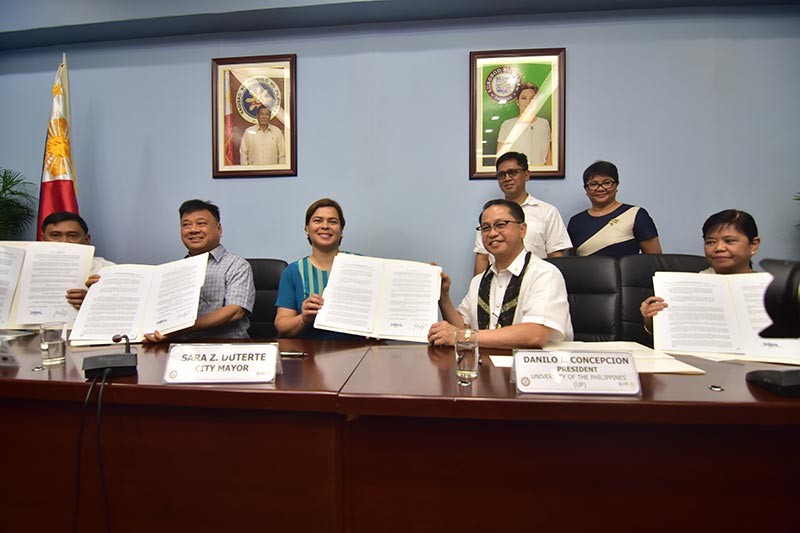 DAVAO City Mayor Sara Duterte-Carpio could not hide her elation as she and University of the Philippines (UP) president Danilo Concepcion at last signed on Thursday, January 10, the memorandum of agreement (MOA) for the operation and management of the Davao City-UP Sports Complex in UP Mindanao campus, Tugbok District, Davao City.

Carpio, in her message, said, “For the longest time it has been a dream of Dabawenyos to have a large sports facility in the city. We cannot underscore often enough how important it is for Davao City to have its own government-owned sports complex, not only to allow us to host major sporting events, but also to provide Dabawenyos a facility to train for various sports disciplines. And now, after many years, we are glad that we finally have the Davao City-University of the Philippines Sports Complex in the UP Mindanao campus.”

She then thanked UP for allowing the partnership with the city government, also citing the efforts of lawyer Lawrence Bantiding, former congressman Isidro Ungab and Davao City Third District Representative Alberto Ungab in “making sure there is money” and project implementation is on schedule.

She also thanked UP for working with the City Government of Davao and for allocating the parcel of land which the sports complex now stands.

“Following the memorandum of understanding signed by our respective predecessors in 2015, and after three years of coordination and collaboration, today we sign the agreement that officially seals the partnership for the management and operation of the facility. With today's signing, we move closer to the attainment of our vision of transforming Davao City into a premier sports-tourism destination,” the mayor said.

The Davao City-UP Sports Complex will be the main hub of sports events of the Davao Region Athletic Association (Davraa) Meet 2019 slated January 27 to February 1 and Palarong Pambansa 2019 on April 28 to May 4.

She also said that with various facilities in the sports complex wherein local athletes can use in training, Duterte-Carpio said she is confident to see more Dabawenyos succeed in their respective sports.

Concepion, for his part, bared that the collaboration with the city government of Davao is the "first of its kind" partnership of UP with the local government unit.

“Kami po sa University of the Philippines ay lubos na nagpapasalamat sa napakalaking tulong na inaambag ng pamahalaang siyudad ng Dabaw sa Unibersidad ng Pilipinas,” the UP president said, adding that he wants UP Mindanao to be a lead school in this part of the country.

He also said that UP plans to offer sports-related courses and perhaps build a college of human kinetics with the help of the City Government of Davao and President Rodrigo Duterte.