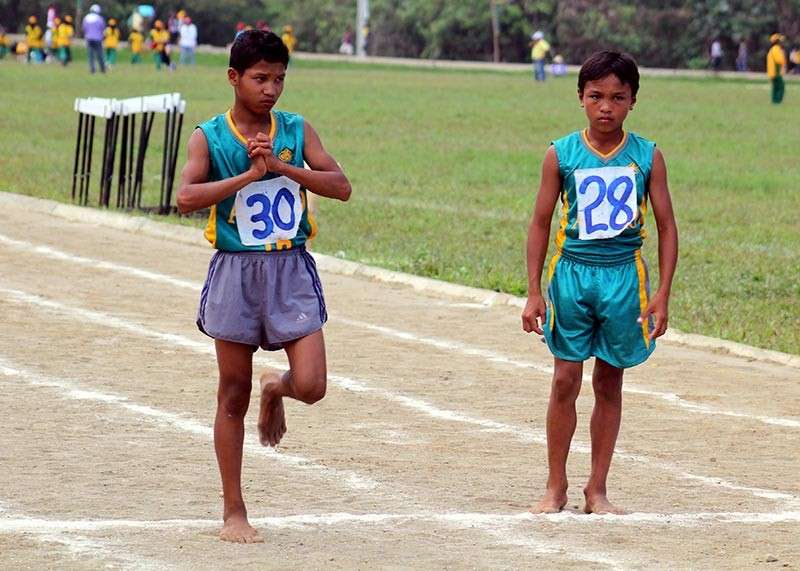 BENGUET. During Apayaos’ hosting of the CARAA sports meet in 2013, student athletes utilized the dusty oval track. Fast forward to 2018, officials of the province vowed for an improved oval with the installation of a rubberize track in time for the opening of the annual regional sports meet this February. (Photo by Roderick Osis)

BARRING any major weather disturbances, the province of Apayao is ready to lay out the ground work for its rubberized tartan track in time for the opening of the Cordillera Administrative Region Athletic Association next month.

Vincent Talattag, Apayao provincial administrator said the completion of the tartan tracks is hopefully eyed by the end of January as the province gears up for the hosting of the largest sports meet in the region with close to 5,000 athletes and coaches joining the weeklong competition slated February 27 until March 5.

“Right now, we have completed the concreting of the oval track and within the next three days, our contractor will be asphalting the area before they will place the rubber tracks and hopefully, they will be completed by January 31,” Talattag said.

The provincial official added P60 million was earmarked for the installation of the tartan tracks and the improvement of the different playing venues for CARAA.

Apayao first hosted Caraa in 2013 and hopes to duplicate the success after the construction of its sports complex that includes an Olympic size swimming pool.

Lawyer Zaide Ravelo, of the provincial General Services Office added new sports equipment, including three billiard tables purchased by the province will be also be ready by the month’s end.

Earlier, Georaloy Palao-ay, Department of Education - Cordillera (DepEd-CAR) information officer, said the provincial government and DepEd Apayao asked to move the annual sports meet to be able to rehabilitate the different playing venues and billeting schools after they were damaged by recent typhoons.

Palao-ay added that instead of the usual February 6 opening, the dates were moved to a later date as rehabilitation of the province’s sports complex located in Payanan will have to be completed by then.

At least 23 sports event will be played during the competition with Baguio City eyeing to defend the over-all title anew.

The Summer Capital scooped 222 golds including 102 silvers and 61 bronze medals as it clinged to the over-all title again in last year’s edition hosted by Abra.

Benguet placed second with 38 gold medal followed by Ifugao which improved to third place as it gathered 36 gold medals.

Talattag meanwhile assured safety among participants as 500 barangay tanod (village watchmen) were tapped to augment the police force of the province including the Philippine Army stationed in the area.

The official said the tanods were also trained of basic life support to serve as first aid responders in case of any accidents during the sports meet.