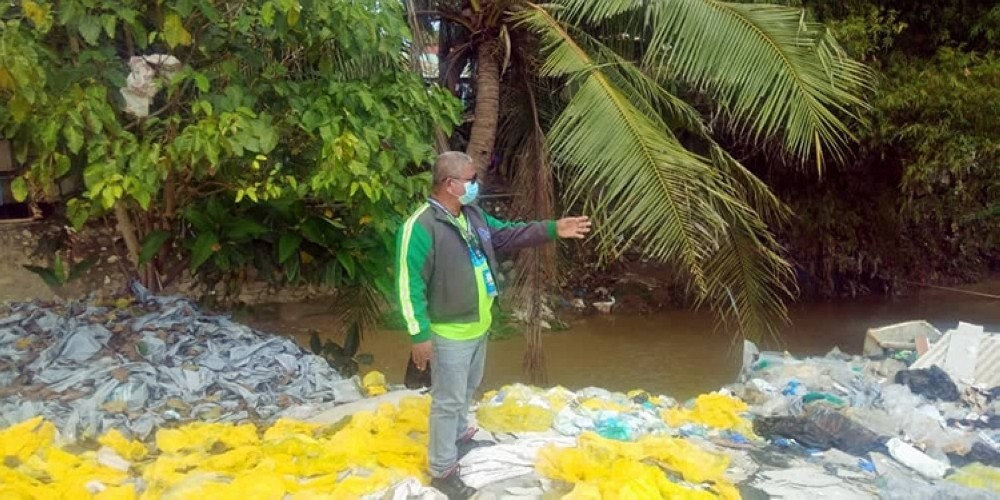 In Butuanon too? Yellow trash bags similar to those found floating in the shallow waters of Barangay Ibo, Lapu-Lapu City have also been dumped in the Butuanon riverbank on the side of Barangay Umapad in Mandaue City. (Fe Marie Dumaboc)

THE question of how used medical items reached the shallow waters of parts of Mactan has remained unanswered seven days since it was reported.

Pending the answer to that question, on Friday, Jan. 11, yellow trash bags similar to those found in Barangay Ibo in Lapu-Lapu City were found on the banks of Butuanon River in Mandaue City.

Samples from the waters in Ibo have been collected for testing.

That, as the Mandaue City Environment and Natural Resources Office (Cenro) will recommend that an order be issued to stop the operation of Davao City Environmental Care Inc. (DCECI) for what Cenro saw as violations of sanitation and waste disposal procedures.

A team from the Mandaue Cenro visited the DCECI office on Friday morning, Jan. 11. They were tasked by City Administrator Danilo Almendras to investigate the waste treatment facility.

DCECI, a private company, has been contracted by Chong Hua Hospital Mandaue and Cancer Center (CHHMCC), University of Cebu Medical Center (UCMed) and other private hospitals in Cebu to collect, haul and dispose of their waste.

The DCECI and CHHMCC have been penalized by the Environmental Management Bureau (EMB) 7 after medical waste they were supposed to treat in DCECI’s facility was found floating off the Ibo coast in Mactan on Jan. 5.

Aside from DCECI, the Mandaue Cenro will also look into who dumped the yellow trash bags in the Butuanon riverbamk in Barangay Paknaan, Mandaue City.

The stench from the waste has prompted Paknaan residents to complain it to the City Government.

DCECI has denied ownership of the medical waste dumped near the Butuanon River.

In an interview, Almendras said that although there is still no evidence to show if the medical waste found in Barangay Paknaan came from DCECI, he has ordered the City Licensing Office to tag the firm in case it plans to renew its city permits.

Aside from the penalties they initially sought from DCECI, the EMB 7 also found more basis to further penalize the firm after it found that the medical waste found in Sitio Apro in Barangay Ibo which came from the University of Cebu Medical Center (UCMed) was to be diposed of by DCECI.

EMB 7 Director William Cuñado said he has yet to receive the report from his investigating team on the medical waste found in Sitio Apro.

Initially, the EMB 7 ordered DCECI to pay a fine of P250,000 for violating various environmental policies.

Subsequently, CHHMCC was also penalized with a P110,000 fine for similar offenses.

Cuñado said that following what happened in Lapu-Lapu City, he urged hospitals to put up their own medical waste treatment facilities rather than secure the services of a third party treatment facility.

Personnel from EMB 7 have also started collecting samples from the Mactan Channel in Lapu-Lapu City on Friday, Jan. 11.

Maria Cleofe Javera of the EMB 7 Toxic Chemical Hazardous Waste Monitoring Section said the water sampling aims to check for the presence of fecal coliform and to determine the water’s PH levels.

Javera and her team were accompanied by Lapu-Lapu City Environment and Natural Resources personnel for a sea patrol and coastal verification of the Mactan Channel on Friday.

The water sampling will also determine if there is contamination at the Mactan Channel after medical and hazardous wastes were dumped there, Javera said.

Aside from Lapu-Lapu City, another team from EMB 7 is also collecting water samples from Mandaue City.

Javera confirmed that they found sightings of yellow plastic bags, similar to those found in Mandaue City, in Barangay Ibo.

They also found another batch of medical waste that floated along the coastline of two areas in Barangay Poblacion; a plastic bag in Barangay Pusok and unused syringes in Barangay Ibo.