Sorongon wins it for ailing dad 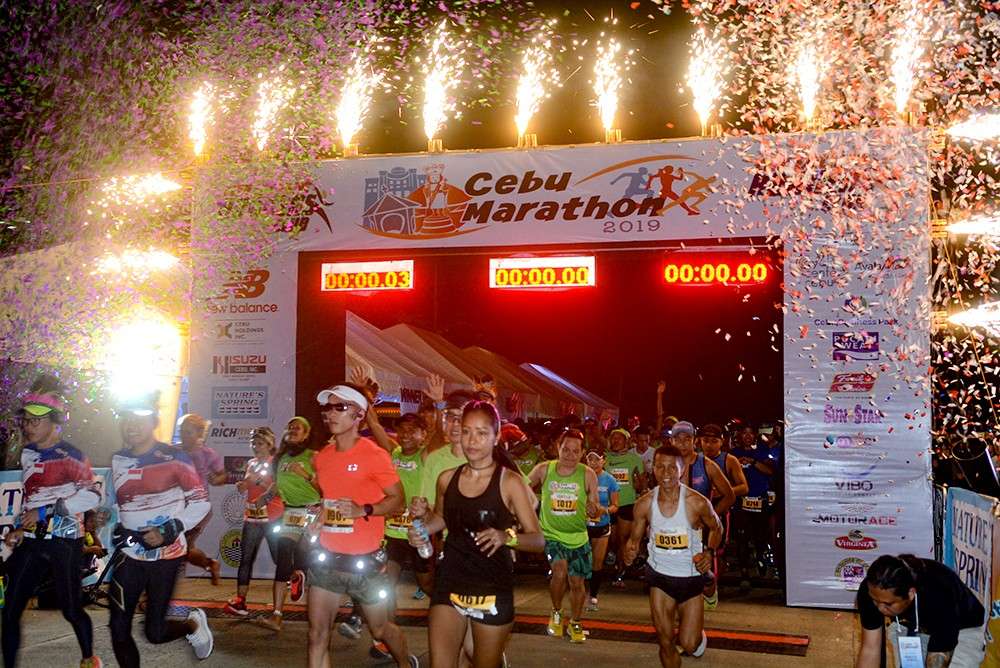 FESTIVE. Fireworks greet the runners as the 2019 Cebu Marathon kicks off at the Cebu Business Park. (SunStar foto / Arni Aclao)

WITHOUT a doubt, Ruffa Sorongon has made an impact in Cebu’s running scene in her six-year stint here. She continues to do so by adding another feather on her cap in the 2019 Cebu Marathon, which wrapped up at the Cebu Business Park, on Sunday, Jan. 13.

Sorongon, a Sultan, Kudarat native, dedicated the recent feat to her 67-year-old father, Patricio, whose hard work is a source of inspiration.

“This is for my father who was recently discharged from the hospital. He’s very hardworking just like the other farmers in our place. He was admitted for four days due to a kidney problem and urinary tract infection,” Sorongon, who’s usually known for her reserved personality, said in Cebuano.

Sorongon won the 21K category in the previous years and it was her first time to win the full marathon following a second place finish last year.

“My father is very hardworking. I was worried because it was his first time to get admitted in a hospital,” said Sorongon. “I’m glad that he’s already discharged.”

For Sorongon, the win and the recovery of her father were answered prayers by Sto. Niño.

Sorongon trailed Evamie Villarin in the first 16 kilometers before stealing the lead on the 17K-mark. She never looked back after that.

Mururi described the event as a way of celebrating the presence of Sto. Niño.

“Sto. Niño is a blessing to us and that is why we are celebrating this kind of event,” said the 33-year-old Mururi, who travels to different parts of the Philippines to join fun runs.

Mururi said that the course this year was hard but this kind of challenge will define an athlete’s character.

“It will determine how strong you are. How you respond to the challenge. We enjoy the race because it molds the athlete to grow up and improve. I’m happy to win this because for me this was a hard race,” said Mururi.

On the other hand, Ginatilan-native Joseph Arnel Emia continued to boost his stock in Cebu’s local running scene after winning the men’s 21K category for the first time.

Emia is off a confidence-boosting 2018 that saw him finish in the top 10 in the Milo Marathon Finals. He also made an impact in some local races last year.

“It was in the past two years that I saw an improvement of my time. Before, I could only compete in the early part of a run and I would run out of gas on the latter part. I was able to improve with the help of a training program,” Emia told SunStar Cebu in a separate interview.

The 30-year-old Emia, a runner for the Rider Omega Triathlon Team, said he was surprised to win this race since most of Cebu’s top runners in the half marathon were in the field.

But Emia was in tip-top shape, rushing to an early lead a few meters from the starting area and never wavering until the finish.

In the 5K race, junior triathletes Karen Manayon (22:49) of Talisay City and Moira Frances Erediano (23:23) of Lapu-Lapu City had a 1-2 finish in the women’s division, while Joan Alinsunod (23:48) of City of Naga finished at third place.

CERC’s Kenneth Casquejo said that it was not a perfect race but they made sure that the participants enjoyed the race.

“On the organizers’ side, we can discuss things that needed improvements so we can apply it to the next edition and make it an even better event,” he said.