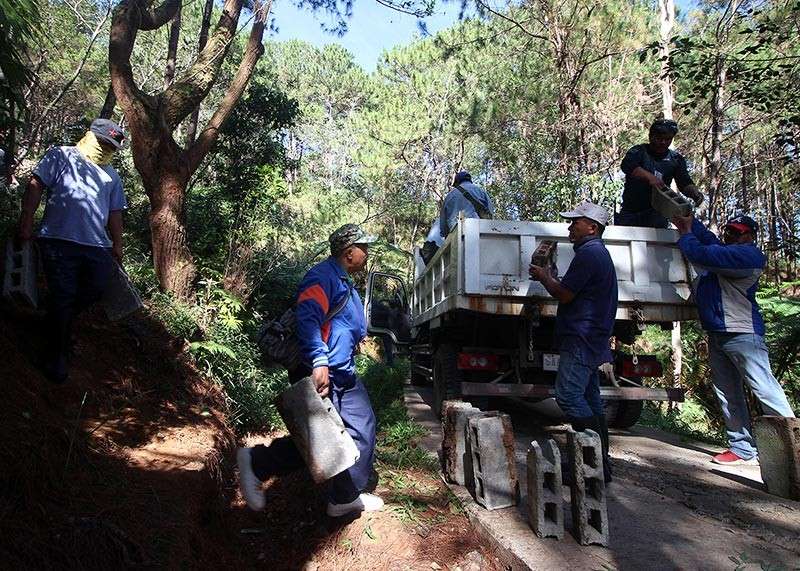 BENGUET. Authorities confiscate construction materials of illegal settlers at the Puguis La Trinidad communal forest. The forest is being claimed by the Tiotioen clan and other individuals who filed a case against La Trinidad but lost. (Photo by Jean Nicole Cortes)

ARMED with notice of violation and special order from the Department of Environment and Natural Resources (DENR), a joint undertaking to remove illegal construction materials inside the Puguis Communal Forest was conducted on January 15.

“In the interest of service and to ensure the protection of the Puguis Communal Forest from illegal occupants and to preserve its environment from prejudicial unauthorized acts, personnel from the following offices are required in participating in the conduct of the operation on January 15, 2019,” declared the Special Order No. 2017 series of 2019 signed by DENR-Cordillera director Ralph Pablo.

Notice of violation were also issued by the office of the building official of the municipality against illegal settlers for violating the national building code known as PD 1096 for not securing building or fencing permit.

“To recall, the mayor issued Administrative Order no. 68 s.2018 ordering the confiscation of construction materials and we were given a copy of special-order signed by the DENR Cordillera regional director,” stated Municipal Legal Officer Attorney Bartolome Baldas, adding all confiscated construction materials will be impounded and use as evidence for any case to be filed.

In 2018, a status quo was ordered for both the municipality and Heirs of Evaristo Tiotioen not to bring or confiscate construction materials brought inside the communal forest.

The memorandum, released last year by the mayor, ordered to take measures to prevent further attempt to continue any further illegal construction in the area including the confiscation of all materials relative to the illegal activity in the communal forest.

The petitioners, Heirs of Tiotioen through their counsel filed the petition prior to the implementation of the memorandum order, praying to the court to prohibit the mayor from further issuing memorandum against the petitioner’s subject property.

Forester III Lunes Marcelo added continuous monitoring will be undertaken inside the communal forest. “We will assign more forest guards coupled with the assistance with the local government unit,” he said.

Heirs of Tiotioen including Gretchen Fagyan talked to the personnel of DENR and denied to receive the special order. When asked for a media interview, she conveyed not to comment on the matter.

In an earlier report, the petition for prohibition, injunction filed by Heirs of Evaristo Tiotioen versus La Trinidad, Benguet officials was dismissed by the Regional Trial Court Branch 62 for lack of merit.